Life as a Pastry Student: Making It Work

ICE student Lauren Katz shares how she's juggling culinary school with her position as a web editor at Everyday with Rachel Ray.

One of the first things people ask when I tell them I’ve started the Pastry & Baking Arts program at ICE is, “So, are you still working?” I was surprised the first time I was asked this question, because, to me, the answer was so obvious.

I currently work as the web editor at Every Day with Rachael Ray magazine, and on Mondays and Tuesdays I leave about an hour early to rush down to Battery Park for class. At first I was terrified to juggle work and school — scared that the trains would be delayed, that I wouldn’t have time to eat dinner and, most of all, that I would be exhausted and unable to pay attention after an eight-hour day at the office. But what I quickly discovered is that my passion for baking overrides all of the above.

My most vivid memories of growing up are those of helping my mom cook and bake. From sitting on the counter to perching on my tippy toes, to eventually standing right by her side, my appreciation for culinary education starts with her. My grandma was also a phenomenal cook and baker, and it has become very apparent how much of her talent has been passed down through two generations.

Yet it wasn’t until I was old enough to prepare entire meals for my family and friends that I fell in love with cooking. It was so gratifying to see something go from a collection of ingredients to a beautifully composed dish, all due to my diligence and hard work.

When thoughts of working in the real world began to populate my brain, I started focusing on perfecting my two passions: cooking and writing. It only took about a semester in college to realize my dream job: editor-in-chief of a major food magazine. At 24, I’m so lucky to already work at a food magazine, but I knew that to further my career, the hands-on part of my professional education still needed to be fulfilled.

So after more than a decade of watching the Food Network, attending recreational cooking classes and hosting dozens of dinner parties, I knew that it was time to pursue my passion for pastry and baking. 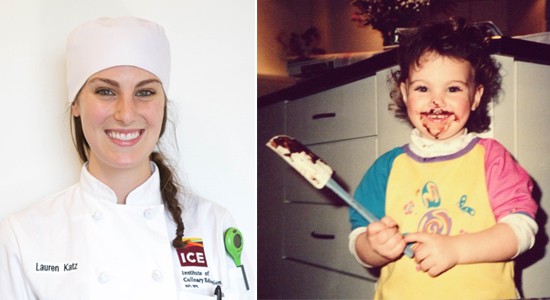 It took watching just one episode of the Netflix series Chef’s Table for me to pull the trigger and submit my application for Pastry & Baking Arts at ICE. Seeing the drive and devotion of such chefs as Massimo Bottura and Dan Barber was one of the most inspirational things I’ve ever witnessed. I could relate on so many levels, and I realized that, at one point, these chefs had the same dreams that I do now.

Now that I’ve enrolled in culinary school, those dreams are close 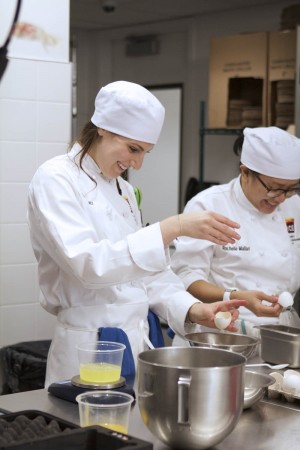 r to being realized than ever before. Being away from my apartment for more than 13 hours a day, eating dinner on the subway and getting significantly less sleep is far from an ideal lifestyle, but the gratification I have received in just four weeks has been worth it.

What’s more, my fellow evening class students share my drive to succeed. They too are juggling unusual schedules, and their commitment is proof that they genuinely care about making it in this industry, just like me. They make excellent taste testers, too!

In just the first few weeks of class, I’ve had so many different experiences, and one of the best pieces of advice I’ve received was from Alice’s Teacup owner Michael Eisenberg. He spoke to our class about the trials, tribulations, risks and rewards of owning a restaurant and to use this time to fail as much as we can. Those words alone have made me infinitely more excited to learn, experiment, fail and — eventually — succeed.

So bring on the soufflés, flambés, pâte à choux, fondant, ganache and sugar sculpting. I’ll be waiting at ICE with open arms.

Making a Case for Concord Grapes