When I was growing up, Hanukkah always meant candles, presents, and most important of all, the smell and sound of latkes frying at my grandmother's house. While today I may use a recipe or a formula, my grandmother used neither and instead relied on her intuition and decades of frying experience to make what I remember as the perfect potato pancake.

She would hand grate some potatoes, an onion or two, some eggs, matzo meal and a very generous handful of salt before she would start frying. She would always joke that her latkes were kosher, except if she nicked her finger on the box grater, and then they weren’t kosher anymore! Today, I build on her expertise and usually use a ratio of 2:1 potatoes to onions, keeping the tradition of adding eggs, matzo meal and salt. For a variation, I grated a variety of root vegetables, including parsnips, turnips, carrots and sweet potatoes to make a more colorful, richly flavored latke.

Some useful techniques when making latkes include grating the onion over the potatoes to prevent discoloration and squeezing out as much liquid as possible from the grated vegetables prior to adding in the rest of the ingredients. Fry in peanut oil if possible, for its high smoking point, and serve with either homemade applesauce, if accompanying meat, or garnish with sour cream, crème fraiche and dill for a lovely addition to your holiday table. 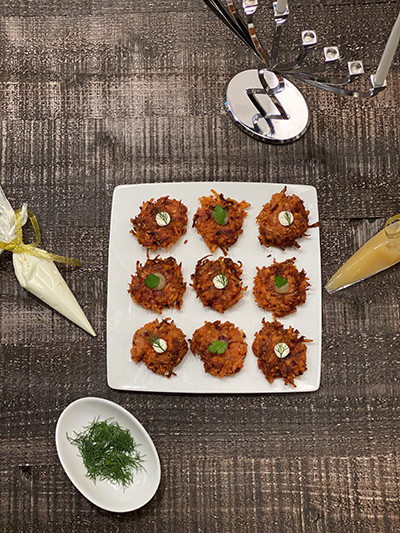