The Curious History of the Mince Pie

A Christmas staple in the U.K., and my personal favorite, mince pies are as popular as ever in the U.S. and have always caused some confusion. I was frequently asked if they had meat in them whenever I sold mince pies in my patisserie in New York City. It’s a valid question because the recipe originally had various meat fats, including suet and even sheep’s tongue, but that’s not how it got its name.

The term “mince” actually comes from the Latin word “minutus” that means small and has no connotation with minced meat, which is a common misconception. The history of how mince pie originated is varied and no one can pinpoint its exact source. Some historians date it back to the birth of Christ, 12th-century crusades or King Henry V. This historic pie has many variations from around the world and evolved to what we make and consume today, which is pretty impressive and can’t be said about too many modern dishes. 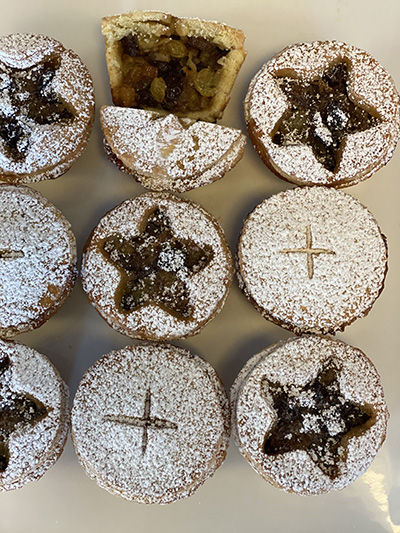 Many believe the idea for the mince pie originated with Middle Eastern cuisine in the 12th century, when spices and fruit were often used in savory and sweet meat dishes. Before refrigeration, spices and sugars were used for preservation to slow down spoilage. It makes sense that the food was tried during the crusades and then brought back to Britain.

King Henry V had mince pies made as early as in 1413 for his coronation celebration on April 9. During this period it would have been made with various meats, game birds, boiled eggs and spices, which were very rare and extravagant ingredients of the time as this was a pie for celebration.

There are varied connections to Christmas history as well. Some suggest the ingredients represent the three wise men’s gifts while others deduce that the pies are made around Christmastime because of the specialized ingredients involved (spices and citrus fruits that were not local to the British Isles) indicating a special occasion. I like the idea that the mince pie is a culmination of a whole year’s harvest: summer’s grapes are dried into plump raisins, autumn orchard fruit is harvested, citrus is candied and any spare alcohol may be incorporated.

During the 17th-century prohibition era under the rule of Oliver Cromwell, the small pies were banned, as was everything associated with Christmas and the birth of Christ. But the traditions were promptly revived after his reign came to a sudden end.

By the end of the Victorian era, the meat began to be more commonly dropped and replaced solely with fruit and spices. Sugar from cane in the West Indies had become more readily available and the public’s desire for sweet items grew.

Over the centuries, the historic pies have traveled all over world, ever popular in the U.K. and some parts of Europe, Australia and New Zealand. In the U.S., canned mincemeat filling became popular during the Prohibition era because they had alcohol content.

Beyond the departure from mutton and sheep’s tongue, not much has changed to modern mince pie recipes. I make my mince pie mix at the end of summer and feed it brandy weekly, however that process is not imperative. Mince pie can be made in two to three days. I like to use grapefruit juice and candy the peel for bitterness. I use brandy, but if you prefer whiskey or Scotch, either can be substituted. Fat is included for two reasons: to prevent the filling from drying out and (especially in the past) to slow spoilage. Beef suet is preferable for this, but vegetable shortening works fine. 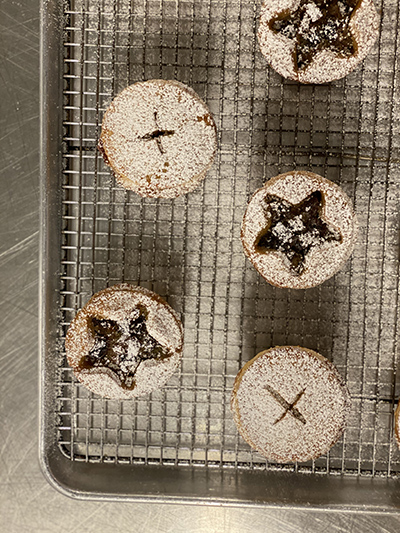 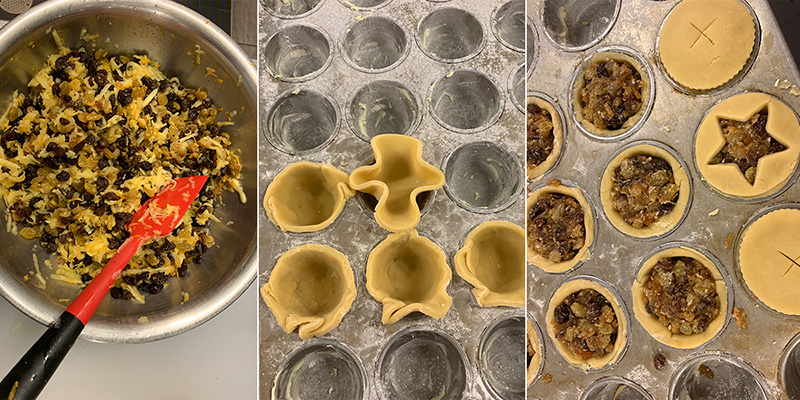