As an avid student of chocolate history, culture and manufacturing, I’m always looking for connections to the work of chocolate makers past. I collect all kinds of artifacts and ephemera, including several vintage chocolate molds dating back 100 years or more. Some have faired better than others in their decades of storage gathering dust. With a bit of restoration and cleaning, I thought it might be fun to attempt to return these metal candy molds to their former glory and once more cast chocolate in them.

In its earliest modern form, in the days of the 19th-century Industrial Revolution, chocolate would have been sold unsweetened in rough blocks and cakes, to be ground or broken up by the end-user for use as a beverage. Technology and changes in formulation led chocolate’s evolution into the sweet confection we know today, and alongside it, methods of tempering and molding.

Today, chocolate is molded in plastic forms, but the first molds were crafted of steel or copper and coated with tin or nickel. Common shapes included the typical bar, along with animals, toys, tools and popular holiday-themed forms like eggs for Easter and Santa Claus for Christmas. Large and small novelty shapes were created with thin two-piece molds, held together with hinges or clips. Production frame-style molds with several cavities could be quite bulky and heavy, weighing several pounds on their own. Pioneers in mold-making emerged in France and Germany, like Matfer and Reiche, and these imported molds and others from domestic dealers, like Eppelsheimer and Weygandt, were displayed in bound catalogs from wholesale sellers like New York’s Crandall-Pettee Company in TriBeCa, an early 1900s precursor to professional kitchenware boutiques like JB Prince. As plastics technology developed in the 20th century, these metal molds fell out of use in favor of materials like Bakelite and eventually the familiar clear and lightweight polycarbonate we use today.

Because of their durability, many of these old molds still survive. Savvy antique sellers know that vintage metal molds are a hot commodity among collectors. Based on their size, shape, maker, condition and rarity, some molds can fetch $100 or more. Original printed mold catalogs are also in high demand. From flea markets to eBay, molds can be found in thousands of varieties – and in varying conditions. Rust and wearing of the tin coating are common after years of disuse. Most of the molds in my collection tie directly to New York City’s chocolate-making past, though I am also interested in hunting down other unique, interesting shapes. Among them: a letter and number mold used by the Auerbach company on Manhattan’s west side in the 1920s and a rare hinged cigar mold with magnetic closures made by the German firm Bodderas that I presume was used by the Hawley and Hoops factory that was located in the SoHo neighborhood on Lafayette Street. 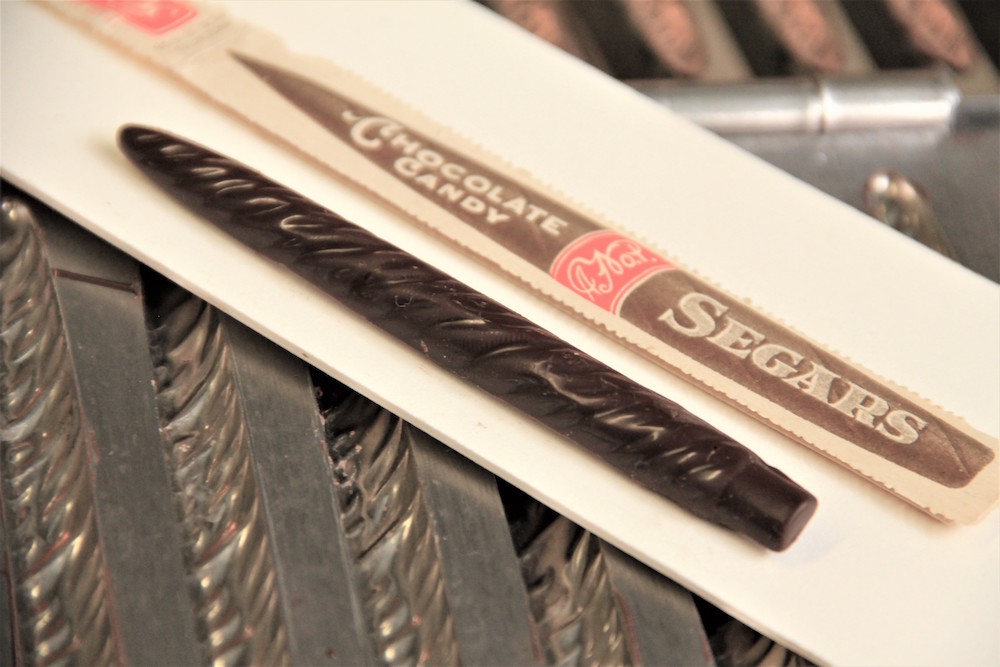 Armed with an array of brushes, sanding blocks and cleansers, I set out to refurbish these molds as best as I could. The candy cigar mold simply needed some light rust removal and a good polishing. The edible alphabet mold needed a bit more care and attention; the fine detail of the cavities made it more challenging. While a decorative egg mold needed little more than a wipe with alcohol to remove a bit of dust and grime, a very old two-piece Santa Claus mold was slightly bent and had lost much of its plating; I’d rather preserve its patina for display than risk further damaging the surface. 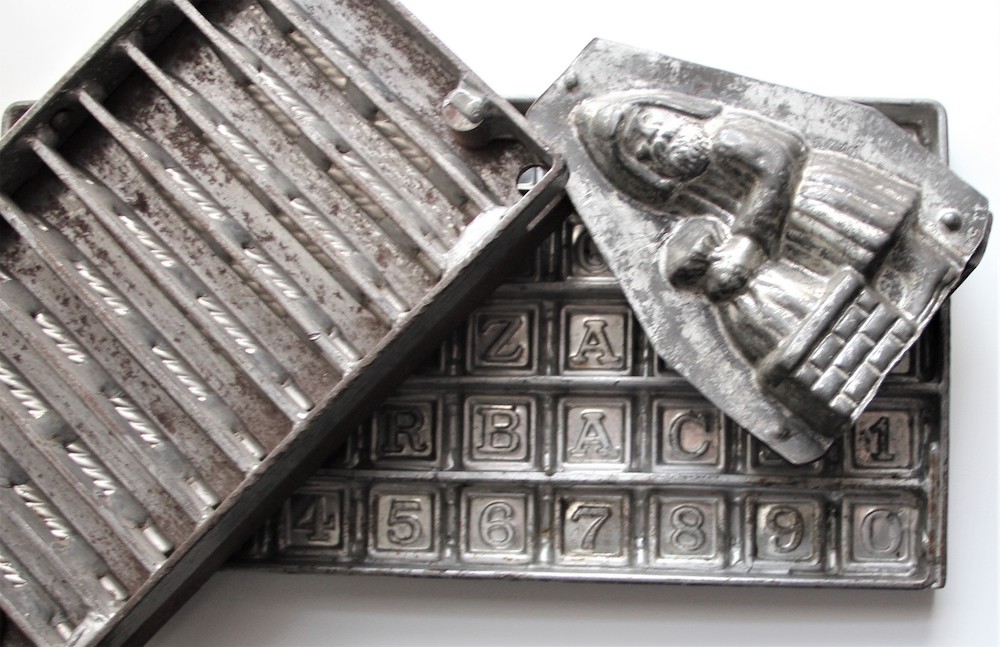 Once cleaned and polished, I was ready to hit the Chocolate Lab. I quickly realize the convenience and versatility of modern plastic forms over the vintage metal molds. Apart from their weight and bulk, metal can be tricky when working with temperature-sensitive chocolate. A hundred years ago, the tempering process, in practice, was less precise than the methods we use today, so I wonder how chocolate makers worked around the problem. Using metal molds may have presented challenges but perhaps also a slight advantage to compensate for less than perfect tempering. 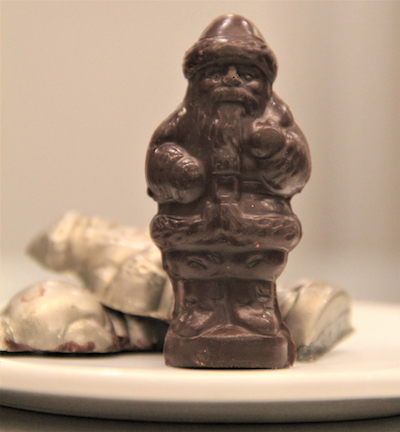 To start, I typically warm a mold before casting. The idea is not to heat the mold until it is hot (that would immediately pull the chocolate out of temper), but rather to gently bring the mold a bit warmer than room temperature, close to that of the tempered chocolate itself. Plastic isn’t conductive; however, the metal molds are and thus retain the heat much longer, requiring patience to get the temperature just right. By using our EZ-Temper unit, I tempered the chocolate at a slightly higher temperature and with added cocoa butter for more fluidity to better fill the detailed molds and prevent premature crystallization.

With a bit of practice and patience, I found the molds to be just as functional today as they were when in production, though I’m not sure I’m ready to give up my polycarbonate molds. The project was also a great way to motivate myself to learn the basics of cleaning and restoring metal surfaces. While I’m excited to bring these molds back to life, they will now remain on the shelf — I just couldn’t help but cast them at least once to make that connection with the past. And my search for more molds to add to my collection continues!

Get hands-on in ICE's bean-to-bar chocolate lab in the Pastry & Baking Arts program.

I have some incredible Easter molds that were given to me by my mentor, a Dutch pastry chef. I’m not interested in selling them, but AP, after pandemic, I’d love to bring them along to play with them together, so please contact me.

Here’s a funny story that adds even more challenge to using mine...when I managed an ice cream and chocolate factory back in the 1980s, a Romani tinsmith stopped in and offered to clean and re-plate my molds for a fair price. I agreed. When he returned, he had plated only one side of each and demanded additional money for completion. I wouldn’t agree, so now most of my set has one freshly plated side that releases easily, and one original side that sticks. But i can get a reasonable number of good pieces with each batch, despite not having a temperer and propping the molds up in quart containers filled with dried beans or rice as they set. They are superb molds though, night and day out from today’s.  Scjanson1at gmail.