On Growing Cacao and the Importance of Bugs

Growing cacao beans for chocolate requires intensive effort to overcome a number of pressures that affect the crop. In addition to human labor, there are other unsung heroes at work at cacao farms all over the world, and you might be surprised to discover who they are.

As someone who spends a lot of time thinking about the chocolate-making process and complexity of the cacao supply chain, I notice most of the consumer-facing education efforts (and even those aimed at professionals) tend to oversimplify what is admittedly a complicated and variable succession of events. Awareness of these intricacies helps us all to better value the work of farmers and makers and to better respect and appreciate the end product. When breaking down the process, so many of the stories and infographics begin at the factory level, far removed from the cacao trees and the millions of farmworkers worldwide who foster them. At best, we’re offered a brief glimpse of the cacao pod harvest at origin and the important fermentation and drying steps that follow.

The growing season from flower to ripened cacao pod is roughly six-months-long, and the labor and expertise at the farm level employed long before harvest are just as important as processes that kick in when beans arrive at the factory. Outside of highly technical literature, little attention is paid to cacao agronomy, the study and best practices applied to growing the crop. Among the important work in this field are genetic research, farm management and mitigation of disease. As one learns more about farm-level concerns, one also discovers a tiny but mighty actor that plays a big role in our chocolate supply: an insect commonly known as a midge. 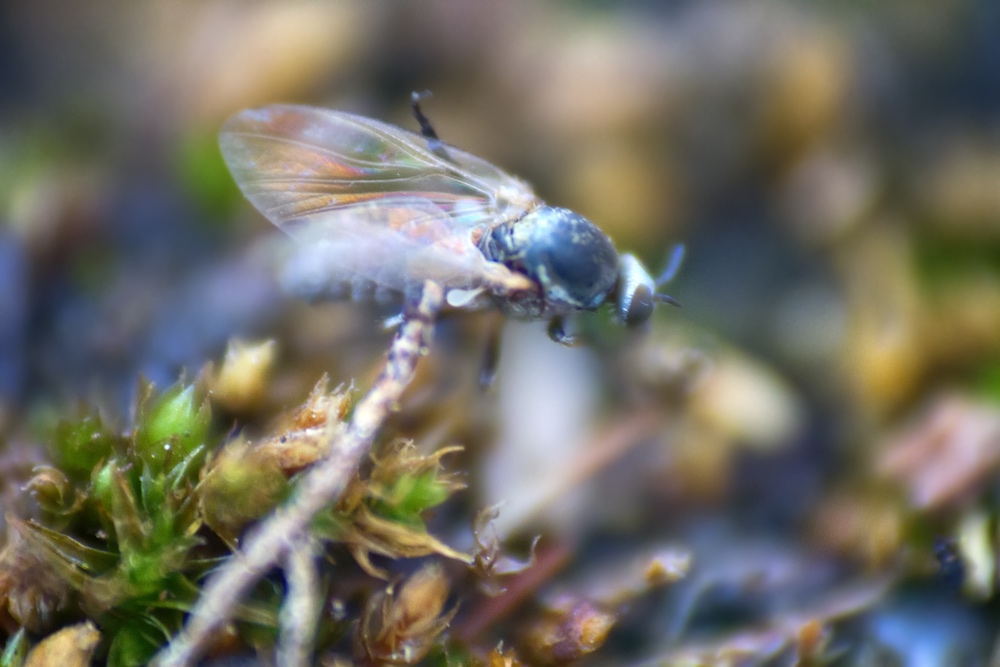 Apart from the familiar honeybee, most of us tend to overlook the importance of pollinators – the various bugs and other animals that fertilize the flowers that bear the fruits we eat. Cacao midges — tiny biting flies of the family Ceratopogonidae and the genus Forcipomyia — thrive in tropical climates around the world and are the primary means of cacao flower pollination. These diminutive farmworkers represent a delicate balance of nature and farm management, though most of their work is rarely seen up close. Before we explore the habits of the midge, let’s first take a look at a few of the various agricultural factors at play, before and after pollination, to produce the beans that make up our chocolate.

A noted chocolate expert once said, “The only species more promiscuous than cacao is mankind.” That might evoke a giggle, but it might also oversimplify the murky world of genetics. It is true in a broad sense that most cacao trees are self-incompatible, meaning that a flower on one tree requires the pollen of a flower from another tree to fertilize. To better understand this complex subject, I turned to Daniel O’Doherty, a cacao agronomist and consultant based in Hawaii, with experience working in cacao farms around the world. This reproductive system is not uncommon among plants, but with cacao, it can affect farm management decisions and influence a pod’s size, shape, color and bean size (what botanists refer to as morphology).

With regard to flavor and quality, there is still much to learn about the effects of cross-pollination. As both the pulp quality (determined by the "mother") and the seed, or bean, (recombinant as it is determined by the "mother" and pollen donor "father") play a role during the fermentation stage that further influences flavor. More research on how these factors affect quality is needed to approach breeding cacao with flavor in mind. And when it comes to planting new trees, it’s not as simple as planting seeds from an existing tree with beneficial traits; there is no guarantee the progeny will resemble or behave like the parent. Instead, the preferred way of producing trees of uniformly high quality is by vegetative propagation (grafting, for example) that will result in clones of the desired parent tree. Though their range may be limited, the pollinating midges are a vital link that solves the compatibility problem by carrying pollen from one tree to another. After speaking at length with Daniel, I came away thinking about cacao’s incompatibility less as a challenge and more as an important survival mechanism against inbreeding, and today we benefit from the range of genetic diversity that has evolved over millions of years.

Cacao trees also require several years of growth before reaching full mature yields, a significant investment of time taken on by the farmer. And throughout that period, there is continual pruning and management of shade and undergrowth. When the payoff finally comes with full maturity, thousands of tiny flowers will form in clusters or cushions on the trunks and larger branches of the tree (these fragile cushions, if damaged during harvest, may reduce future yield). Despite the best efforts of the midges carrying pollen from one flower to another, sometimes as few as 5% of those flowers will be fertilized, though Daniel tells me he’s seen rates much higher, due in large part to localized environmental conditions or high pollinator populations. The initial set of hundreds of tiny pods, or cherelles, may make it appear as if the tree will produce an impressive bumper crop. But within weeks, a natural process called cherelle wilt sets in — the tree’s way of culling the final yield down and directing energy to a manageable amount of fruit. This final yield may only result in an average of 20-40 healthy pods, which then might produce as little as 400-500 grams (or roughly one pound) of dried beans, and a comparable amount of finished high-quality chocolate.

Of the several afflictions that can affect yield, the most serious problems include the fungal infections black pod, frosty pod rot and witches’ broom. Though the midges are beneficial bugs, there are several species of invasive aphids, mealybugs and borer moths that damage pods and other parts of the tree. Daniel sees cacao as a sensitive crop that is susceptible to many diseases and pests. “It’s not that there is necessarily less disease in other large-scale crops, it’s just that investment in developing and planting disease-tolerant varieties is higher and control measures are easier to implement at scale. The problem is that it’s hard to get millions of small farmers, in areas often difficult to access, to propagate tolerant varieties (or grafted plants at all). Further, these farmers do not often have access to the education and training or even enough time to implement disease-control measures.”

Though cacao in an origin such as Hawaii is largely protected from diseases due to geographical isolation, he does worry about the ease at which they can be imported from elsewhere. While breeding cacao cultivars for resistance is important, some of the most effective control measures for fungal disease involve tree pruning and manual removal of diseased fruit before they enter a reproductive or contagious stage of development, he adds. Chemical treatments are often cost-prohibitive and harmful to both the farmworkers and the environment, making a lot of cacao, by default, organic. As for animals who also may enjoy the taste of cacao, there are birds, squirrels, rats and monkeys who occasionally help themselves to the fruit, though far lower on the list of threats.

Given all these farming challenges, the cacao pods that survive to harvest become all the more precious, and perhaps the work of the midges is one of the more dependable factors influencing success. Wherever cacao has been introduced over the centuries, native midge species already present are known to visit its flowers. Dr. Sarah E.J. Arnold, an entomologist with the Natural Resources Institute at the University of Greenwich in the U.K., reveals that there is still much to learn about midge behavior. She suggests that studying them might improve their partnership with human farmers and perhaps help us better understand cacao, but from the midge’s point of view. What makes these insects special among all others that live in the farm is their size — just one or two millimeters long — making them one of the few able to navigate the small cacao flower and its complex structure. Even if a local population of midges isn’t particularly large, their efficiency makes up for it, as the minuscule hairs on their back are quite good at collecting and distributing the sticky pollen.

It’s fairly rare to witness them in the act, but Daniel recently shared a short video of a cacao midge at work in Hawaii; he also helped identify this specific species, endemic to the islands, as a local cacao pollinator. As cacao flowers bear no discernible scent that humans can smell, it’s thought the midges might detect something we don’t. It’s unclear what exactly attracts the midges in the first place, possibly scent, the guidelines on flowers, or even UV pigmentation that we can’t see. This behavior is the subject of much of Dr. Sarah’s study – in addition to fieldwork, breeding midges and re-creating some of the farm conditions in a lab. The females, primarily, appear to be most active at dawn and dusk and thrive in the humid environment of rotting leaf litter or discarded cacao pods; in some origins, the large stems of banana trees are collected and laid around cacao trees to provide compost and an ideal breeding ground for the midges. However, having seen a few large industrial-scale farms in various parts of the world, Daniel notes that even such a scorched earth environment provides some habitat for pollinators.

In a detailed interview with chocolate maker Lauren Heineck (all of Lauren’s podcast interviews are great!), Dr. Sarah says that it appears the cacao tree needs the midge more than the midge needs the cacao. And she suggests that the next time we swat away at an annoying fruit fly, we might spare a thought for the humble midge and appreciate the important role it plays in bringing us chocolate.

See how we've used bugs at ICE in the video below!

Read more about the cacao plant and get hands-on in the chocolate lab in ICE's Pastry & Baking Arts program.