What’s the latest news from ICE's New York campus? The Chocolate Lab at ICE’s new facility is fully operational, and chocolate making on our bean-to-bar Cacao Cucina equipment has begun in earnest. Large and small batches are ready for tasting, featuring beans from a wide range of origins, including the Dominican Republic, Ecuador, Trinidad and the Ivory Coast. And after many a dark chocolate batch, our first milk chocolate just rolled off the assembly line with a heady 50% cocoa solids.

As we gear up for increased production and the first of our bean-to-bar classes this fall, I’ve compiled some surprising facts about the different stages of the chocolate-making process. These observations may be old hat to professional chocolate makers, but they are rarely — if ever — considered by chefs and consumers. 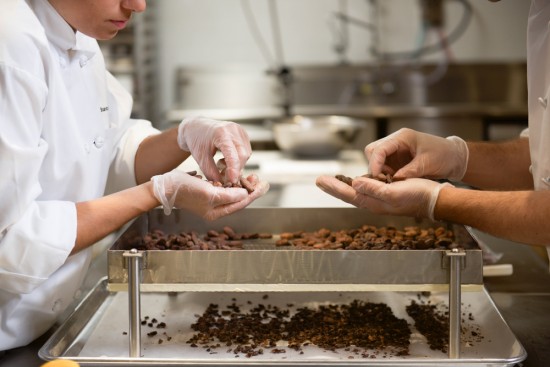 Straight out of the bag, fermented and dried cocoa beans present a serious microbiological risk, including E. coli and salmonella. Outbreaks linked to chocolate are rare, but the risk necessitates proper handling and storage. Simply put, I treat raw beans as if they were raw meat. Also, raw beans must be carefully sorted and cleaned of the various debris found in each bag (flat and moldy beans, stones, leaves, sticks, etc.). If that’s not enough, it isn’t uncommon for tropical moth eggs to hitch a ride on the surface of a cocoa bean! All of the beans that arrive at ICE’s lab are immediately bagged, sealed and chilled until roasting — before any of those tiny wings get an opportunity to hatch.

In addition to providing the only bacteria and moth “kill step” that renders the beans safe to consume, roasting allows for critical flavor development of the cocoa bean, further developing the precursors created during fermentation. Roasting also reduces the moisture content of the dried bean (chocolatiers always seek to minimize the amount of water in finished chocolate), which upon delivery is around 6-8%. Roasting parameters vary by bean type, origin, quantity and the desired flavor profiles—but typically roasters aim for 30-60 minutes or more at temperatures in the range of 300-350°F. Determining “doneness” is mostly subjective and instinctive. Chocolatiers primarily go by smell and taste, but also closely monitor the temperature of the bean mass throughout the process.

After roasting, the beans must be cracked and winnowed, separating the nibs from the shell. The shell alone can account for almost 15% of the roasted bean by weight and adversely affects the flavor and texture of finished chocolate. What’s more, the shell contains elevated levels of toxic heavy metals. Unsurprisingly, the acceptable industry standard for shell content in processed nibs is less than 1%. 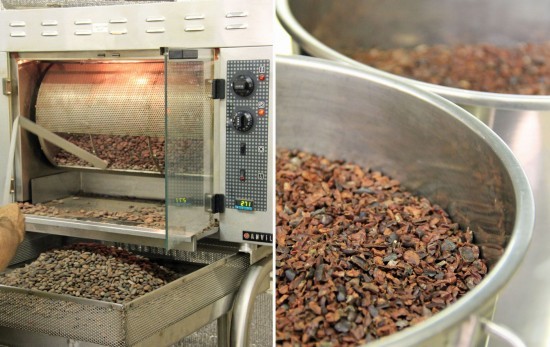 In most cocoa processing systems a “pre-grinding” of the nibs is necessary, to reduce both overall processing time and the eventual wear on refining machines. After grinding, the nibs are reduced to a thick paste referred to as “chocolate liquor,” with a mean particle size of around 100 microns. (And yes, the term “liquor” is confusing to many, as there is no actual alcohol involved!)

A portion of the liquor can be pressed to produce cocoa butter, which makes up roughly 50% of the beans’ weight. In the lab, this process takes one to two hours and nearly 65 tons of force. The remaining byproduct—known as “press cake”—can be further processed into cocoa powder. Unlike the deodorized cocoa butter most chefs are familiar with, freshly pressed butter reflects the flavor compounds from the original beans.

As most fine chocolate has a total fat content of 35-40% by weight, this additional cocoa butter can be added to boost the final percentage. For some single-origin enthusiasts, this added butter makes or breaks a product’s bean-to-bar status, depending on whether or not the extra butter and original liquor are extracted from the same batch of beans.

Refining reduces the particle size of the liquor to an average of 20 microns. The human tongue can begin to detect grittiness at particle sizes larger than 35 microns, but reducing particle size below 20 microns increases the surface area of the cocoa butter, resulting in an unpleasantly thick consistency. Refining is also the point in the bean-to-bar process at which other ingredients are introduced: sugar, additional cocoa butter, whole milk powder, etc. This process is achieved by an array of machines, from stone melangeurs to roller refiners. Some systems, like our ball mill, work as a "universal," allowing for "conching" to occur simultaneously with refining, due to the addition of temperature and airflow control. 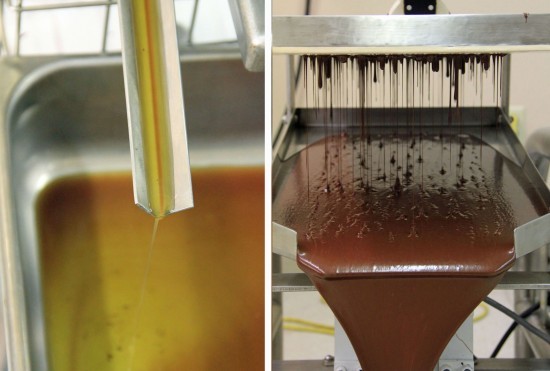 Conching, which involves heat, airflow and agitation, is critical for flavor development (removing unwanted volatile compounds), texture (coating the solid particles with cocoa butter), and further moisture reduction. This process can last for hours or days, depending on the desired results. However, conching time alone is not necessarily a measure of quality.

The final “recipe” for a batch of chocolate is determined by the addition of other ingredients and will vary depending on such factors as bean type, desired flavor profile and application. The percentage you see on the label of finished chocolate refers to the total amount of cocoa solids by weight — meaning the nibs or liquor plus any added cocoa butter.

This number alone is quantitative, not qualitative — a 70% chocolate may be 70% nibs or any equivalent combination of nibs and cocoa butter. Therefore, these percentages may not offer much insight into flavor, but they can tell us how much sugar was added. The percentage of sugar simply equals 100 minus the cocoa percentage (accounting for less than 1% additional vanilla or stabilizers like lecithin, etc.).

Before tempering, it is beneficial to sift or strain the finished chocolate through vibrating screens to remove any large particles that are difficult to refine — notably the “radicle” (or germ stem) that is a part of each bean. This hard stem is very bitter and can produce a gritty texture if left in the chocolate. Integrating a pass by powerful magnets into the sifting process can also eliminate the worry of any remaining hard metals in the chocolate.

While the aging process is not well understood or widely researched, both large manufacturers and small-batch artisans agree that several weeks of aging finished chocolate allows for better, rounder flavor. Large companies inherently allow for this process in their distribution network, while artisan producers will hold chocolate batches in reserve for two months or more before tempering, molding and packaging. None of our batches is more than three or four weeks old at this point, but I’m eager to experience the aging process for myself. I’m reserving most of each batch to evaluate the effects of aging, but with so many of our students and staff eager for a taste, I’m also already molding small quantities for the instant gratification of our efforts!

Get hands on with chocolate making in Pastry & Baking Arts.

How to Make Traditional Apple Strudel