Cause for Celebration: ICE is the Best Culinary School in America

Make sure your champagne (or seasonal cider) is on ice because we’ve got some celebrating to do: The Institute of Culinary Education has been named “The Best Culinary School in America” by The Daily Meal, a leading food and lifestyle website — and was awarded the same title by The Best Schools and EDinformatics. Add to this being named as one of America’s top culinary schools by FSR Magazine, and it goes without saying, it’s been an exciting year for the ICE community. 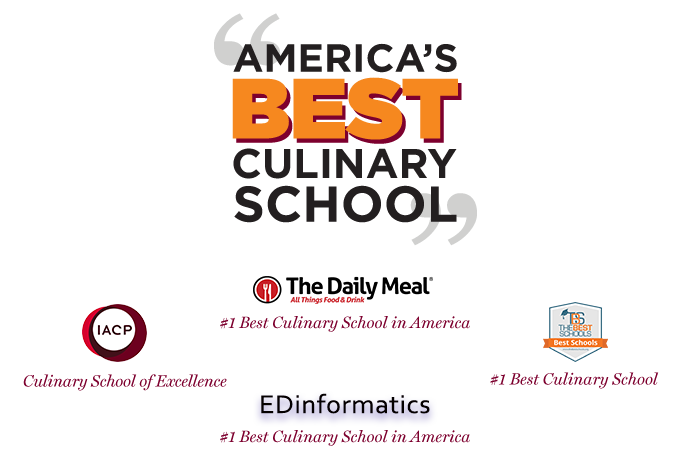 We asked Rachael Pack, cook editor of The Daily Meal, how ICE was chosen as the best culinary school in America. Having gone to culinary school herself, Rachael had been through the process of exhaustively researching culinary schools and was aware of the factors that prospective students weigh.

As she explained, “I used the factors that were important to me as a student coming out of college: the reputation of the school, location, quality of facilities, length of study…and finally, cost.” Though the competition was fierce, ICE was ultimately chosen for the top ranking.

“The top three schools were very close; they are also schools that have been at the top for a long time. For the final tweaks in the list, I fell back on my industry experience and perception of the schools now that I have passed that phase in my life.” Rachael continued, “In the past years I have, of course, made many friends in the industry with different educational backgrounds, so the conversations and interaction with real grads, recent and otherwise, also played a huge role.”

These latest recognitions haven’t been without dedicated work and innovative thinking. The ICE team has grown to include industry-leading chefs such as Michael Laiskonis and David Waltuck. Our new student housing program has opened the door for aspiring culinary and hospitality professionals from around the country to pursue their passions in New York City.

ICE’s new Brookfield Place location boasts over 74,000 square feet of state-of-the-art facilities, including an indoor hydroponic herb garden and the nation’s first education-focused bean-to-bar Chocolate Lab. ICE is honored to receive all of its recent accolades. Still, at end of the day, ICE is most concerned with continuing its mission to help you find your culinary voice.