The History of Chapulines

In the United States, a snack typically consists of chips, yogurt or an apple. However, in some parts of Mexico, a midday bite may include edible grasshoppers called chapulines. Most kids in cities like Oaxaca grow up eating these protein-rich critters without any perils. As chapulines gain popularity worldwide, finding them at ballpark games and local restaurants may become commonplace. To put the unconventional-to-some snack to the test, ICE faculty and staff taste-tested the delicious critters.

When it comes to chapulines, the expression “don’t knock it ‘til you try it” couldn’t be more relevant. The grasshoppers are commonly eaten in Mexico and other parts of Central America. Though some may cringe at the sight or thought of consuming these crunchy insects, others consider them a delicacy, a vital source of protein, and even a part of their cultural tradition.

How Are They Harvested?

To catch grasshoppers, farmers in Oaxaca wake up at the crack of dawn to begin their hunt. At this cooler time of day, the grasshoppers are less hyperactive and much easier to catch. To yield the maximum amount of chapulines, farmers typically wait until summer and fall — during their hatching season — to start harvesting. However, this cumbersome method of catching the agile critters by hand can often prove futile or unsuccessful.

As demand for these protein-rich bugs continues to grow, other forms of cultivating the grasshoppers have taken the lead. For example, companies like Israeli-owned Hargol FoodTech turned to commercial methods of farming the chapulines in controlled environments to enhance the quality and quantity of the harvest. Fortunately, though commercialized, manufacturing these insects yields far fewer adverse effects on the environment than the meat industry. Data shows that the commercial production of grasshoppers results in a very low water footprint, yields extremely low greenhouse gas emissions and is a zero-waste farming cycle, according to Hargol FoodTech. 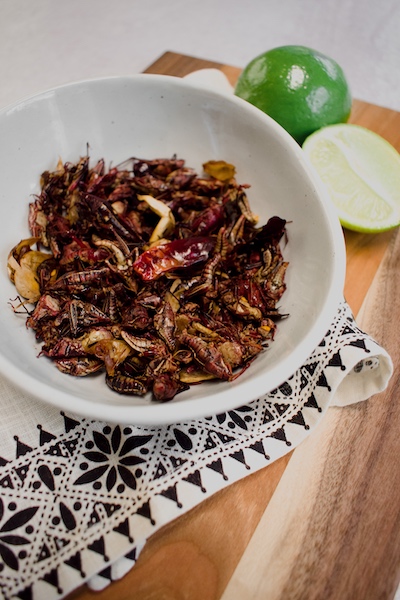 Significance of Chapulines in Mexican Cuisine

The consumption of chapulines in Mexican history traces back as early as the mid-16th century. During this time, the insects were a vital protein source before the Spanish conquistadors introduced domesticated animals to the region. Today, you can still find a bounty of flavored chapulines at the eclectic outdoor markets that line Mexico’s streets.

Traditionally, chapulines are prepared by toasting and frying on a comal, the flat, cast-iron griddle widely used in Mexican cuisine. Then, the bug is seasoned with garlic, lime, salt and chiles. On its own, a chapulín (the word for a single grasshopper) doesn’t have much flavor and is rather bland. When paired with zesty seasonings, the insect adds an exciting crunch to many popular Mexican dishes like tacos or tlayudas, Oaxacan-style pizzas. You can also find spiced chapulines served as bar food alongside a cold, refreshing beer for a more casual snack.

Though these humble critters may seem unappealing to some, they are regarded by many in Mexico as an honor of tradition, which is reflected in their often hefty price tag. Contrary to popular belief, chapulines aren’t as cheap as you may think. Due to the difficulty of sourcing them, one pound of these critters retails at about $50 online.

When attending a baseball game, you can typically expect snacks to range from hot dogs to peanuts to popcorn. However, fans of the MLB Seattle Mariners may have tried chapulines at the team's stadium, T-Mobile Park. In Los Angeles, the Oaxacan restaurant Poquitos serves chapulines for just $5, offering a zesty and crunchy snack.

In Mexico City, an establishment on Latin America's 50 Best Restaurants list called Sud 777 serves a margarita with chapulines. Besides the grasshoppers, you can find other critters on the menu like escamoles — ant eggs dubbed the caviar of the desert — served atop a tlayuda and paired with a serving of guacamole.

In the heart of LA's Koreatown, you can find roasted and seasoned chapulines tacos served at Guelaguetza. Don’t worry, that’s not the only item on the menu. If you’re not feeling too adventurous, this destination offers other authentic Oaxacan foods and flavors like mole, various mezcals and tlayudas with toppings like chorizo or cactus!

We put our Los Angeles campus faculty and staff to the test trying chapulines. Some were experienced chapulín connoisseurs and were not shy taking on the challenge; others squirmed at the mere thought of consuming an insect.

At first bite, “they’re really tough, but they’re salty, spicy and very garlicky,” described Valerie Sanchez from the Admissions department. To our amazement, LA Campus President Lachlan Sands was incredibly eager to indulge in one of his favorite snacks. “I can see their eyes!” he said as he took a generous spoonful. After crunching for a few seconds, he exclaimed, “They’re delicious!”

Chef-Instructor Stephen Chavez gave a thumbs up, while chef-instructors Alan Kang and Eric Mickle were left speechless. After a series of nervous giggles, Director of Admissions Gabriela Arzate gave them a try. “It’s really good; I could have another,” she excitedly noted. Overall, the edible grasshoppers were received with a generally positive consensus, with some asking for more! And now we know more about the tradition of consuming them.