Classic Canelé: The History of the Fluted French Pastry

Originally called cannelé Bordelaise, these small, baked, custard pastries are temperamental and time-consuming, requiring skill to make and so very worth it. In the U.S., these complicated yet ever so simple treats are a dying breed, which is a real shame because they are so satisfying and unique when prepared properly.

As with most classic French pastries (and food in general), these delicacies come with a varied and diverse history depending on what you read, and like most great recipes and dishes from France, they have not changed for generations – the authentic, original recipes being guarded under lock and key. These are classically baked in fluted copper tins, which give the canelé its signature shape.

The name canelé comes from the French word for “fluted.” According to cookbooks, the cannele Bordelaise could date back to anywhere between the 15th and 18th centuries, and most of the history books concur that the pastry originated in various convents around the winemaking regions of Bordeaux in Southern France. Winemakers used egg whites to clarify wine and would give the excess egg yolks to nuns to make food for poor children. With the addition of a few other ingredients, the canelé was born.

Like with most great pastry items, the ingredients are relatively simple, and the technique and execution are key. Egg yolks, flour, butter, salt and milk are mixed together in a very specific order and left overnight so the flour can absorb the milk and hydrate before baking. The ratio of these ingredients is very similar to that of a basic crepe, but with a totally different execution — the results couldn’t be further apart. As Bordeaux is a port, this recipe natural evolved into having rum and vanilla added to it, key components adding distinct flavor profiles. 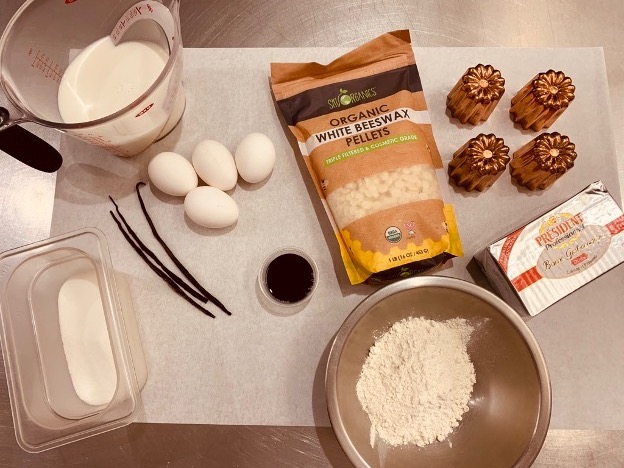 Many revolutions and battles happened within this time period, which would explain the lack of more precise history (as many books were destroyed), but it appears that these cakes have come and gone numerous times in the Bordeaux area, until around 1985 when a group of patissiers’ (88 to be exact) came together to protect and cement the recipe and standard of the cakes and make them the property of Bordeaux. These chefs took an oath to uphold this standard and use a secret recipe, which is kept in a vault and hopefully will be passed down to future generations. To confirm their authority, they dropped one “n” to create “canelé,” which has been seen around the globe.

To have countries like France protect their heritage and maintain their standards is so important in a world of food trends, fads and pure desperation to create something “new” and different, often regardless of authenticity, integrity or flavor. French food may not change but what French chefs do, they do perfectly.

The main variation among canelés can be the color from baking. Pastry chefs such as Pierre Herme have asserted that a canelé should be black in order to get that bittersweet flavor and crunchy outside texture. In France, going that dark is totally acceptable and really at the discretion of the chef, however having lived in the U.S. for a long time, I don’t think this would work here. Customers will either think the pastry is burnt or a chocolate flavor. Either way, it has to be baked lighter for this market, which is actually my preference also.

There are many variables when making the mix, from the method of mixing the batter, to the length of time it rests, to what you use to grease the molds. Below are my suggestions, but there are many other variations I am sure produce the same, if not better results. However one non-variable is the copper tins.

Are they expensive? Yes.
Can you use a silicone mold? No.
That’s it.

Why? Copper is a great conductor of heat and allows the molds to get really hot, which helps create the crust and crispy shell. The silicone molds do not reach that heat, so they will always come out pale (with less flavor), soft and stodgy.

There are also many renditions of greasing the molds: nonstick spray, melted butter, clarified butter, beeswax, butter and beeswax, or “white oil” (a mix of oil and beeswax).

The most classic way is using beeswax and butter, which stops the batter from sticking and gives the canelé a nice gloss when it’s turned out. Using pure beeswax is expensive and can give the pastry a dull appearance.

The mix has to rest. I like to leave for 48 hours, which gives a deeper, better flavor, allows the gluten to hydrate and results in a smoother texture.

To grease the molds, warm the copper tins slightly in the oven just so they are warm, not cold. Fill one mold to the top with the beeswax-butter mixture and then immediately pour out and leave to drip on a cooling rack. It’s really important to get as much excess out, especially at the bottom of the mold. If there is excess, you have what the French call white bottoms at the top of the canelé. Although this does not really affect the flavor, it would not be acceptable in many French patisseries.

Canelés should ideally be eaten an hour after coming out of the oven. Anything after that could be salvaged by flashing in a very hot oven for less than a minute.

As we are not in France, we are allowed to experiment with different flavors, either added to the mix or filled after baking. I have been experimenting at ICE, and some of my favorite flavors are matcha, coffee and earl grey. Some filled canelé taste great with dulce de leche and a lemon curd, but my favorite is still the classic vanilla.