Anthony's teaching the art of [serving] the drink. 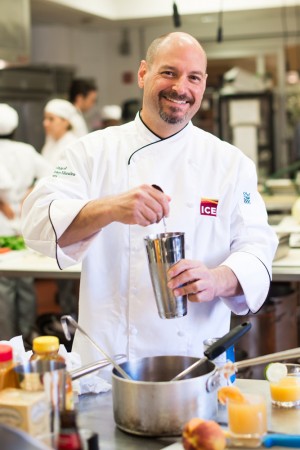 What do mechanical engineering, theater and cocktails have in common? Stir them all together and you get ICE Director of Beverage Studies Anthony Caporale — straight up. Over the course of his multifaceted career, Anthony has consulted on the bar programs for Bobby Flay’s Mesa Grill, Bloomingdales’ Flip! Burger and 48 Lounge in Rockefeller Center.

He has also spearheaded YouTube’s very first bartender training series, Art of the Drink, and garnered rave reviews for his off-Broadway show, "The Imbible: A Spirited History of Drinking." Before he became one of the industry’s leading bartending educators, Anthony was a teenager in suburban Long Island.

His best friend’s family owned a chain of regional theaters, and the pair spent their weekends immersed in the creative craft, serving as ushers for guests or lending a helping hand to the set design crew. By the time he reached college, Anthony had grown into a bona fide performer, starring in or helping to produce a wide range of shows.

Anthony then pursued an undergraduate degree in mechanical engineering at Duke University. Unsatisfied with the college’s social scene, he and his friends started hosting a weekly cocktail club, with Anthony playing the role of bartender. By the time he graduated, these weekly parties had garnered a healthy following.

Questioning his long-term interest in engineering, Anthony opted to try his hand in the restaurant industry. After waiting tables for just a few months, Anthony was promoted to shifts behind the bar. “When people ask me how to get into bartending, I always tell them the same thing — and my answer hasn’t changed for 20 years,” says Anthony. “Join a restaurant as a server and be the best server on the floor — because a bartender has to be everything a server is and then some.” In fact, within months of starting out as a bartender, Anthony was training the rest of the restaurant’s bar staff.

As Anthony was training the staff at various bars and restaurants, he realized that his mechanical engineering background added value to his consulting portfolio. Shortly thereafter, he was consulting on bar build-outs and landed the opportunity to own and operate a bar on Franklin Street in Chapel Hill, North Carolina. Transforming a rudimentary beer bar into an establishment with a full liquor license and kitchen, Anthony fulfilled the roles of contractor, owner and general manager.

“I essentially earned my MBA that year, with everything I learned by building and owning my own business,” Anthony notes. “Ultimately, I realized that I enjoyed opening other people’s bars more than I liked owning my own.” After successfully selling his bar, Anthony took a break from the restaurant profession, balancing days of mechanical engineering with nights in the theater. Yet soon enough, Anthony found himself stopping in at the Maggiano’s restaurant next to the theater to inquire about bartender openings.

That opportunity led to a role as a corporate consultant for Maggiano’s locations across the country, where Anthony’s bartender trainings were so notorious for their entertainment value that the restaurants’ guests would ask to sit in. “Art of the Drink was born out of those trainings,” Anthony explains. “Legally, we couldn’t have restaurant patrons staying on the premises after hours, so I was encouraged by management to create a video version of the trainings. Little did I know that I would be creating the first web video series to focus exclusively on bartending. From there, the opportunities just kept coming.”

Anthony’s newfound notoriety and roots in New York soon inspired a move from North Carolina to the city, where he consulted on projects ranging from bar training for Bloomingdales’ Flip! Burger, to Bobby Flay’s Mesa Grill, to representing Drambuie as the liquor brand’s national ambassador. Having spent so much of his career teaching, it was a natural fit for Anthony to become ICE's Director of Beverage Studies, teaching recreational cocktail classes at ICE, as well as bar management for ICE’s Culinary Management students. Today, Anthony’s multidisciplinary talents have made beverage management one of the most dynamic elements of ICE’s career programs: “Being a great bar or beverage manager used to be a bonus for front-of-house professionals, because all the cocktails were standardized.

But today, with the renaissance of cocktail culture, it’s expected that restaurants put as much thought and expertise into their bar as their food menu — otherwise, every single reviewer will destroy you.” As part of his curriculum, Anthony performs the role of mixology myth buster, exposing the economic and human resources issues that can sink even the most exciting bar program.

“People always say you make all your money behind the bar in restaurants. It’s laughable because you’re literally tracking liquid, which is much, much harder than noticing the disappearance of silverware or chicken breasts. In fact, most restaurants are losing money behind the bar because they haven’t properly trained and motivated their staff.”

Watch as Anthony breaks down bar economics, including bar theft:

For ICE students and bar professionals alike, Anthony’s no-nonsense take on the industry is as refreshing as a summertime gin and tonic: “Good bartenders always remember that the craft is not about making the drink, it’s about serving the drink. People will forgive a mediocre drink if the service is amazing, but they won’t come back for an amazing drink served by a messy or rude bartender.”

How to Saber a Champagne Bottle This New Year’s