These seven graduates have some of the best restaurants in the country.

After a two-year hiatus, the James Beard Foundation is once again doling out its prestigious awards within the restaurant industry this June. On February 23, the Foundation announced the semifinalists for their Restaurant and Chef Awards, and among them, a number of ICE alumni.

These ICE graduates are receiving national recognition from one of the most prestigious culinary organizations, the James Beard Foundation, despite the uncertainty the restaurant industry has faced in the last two years. 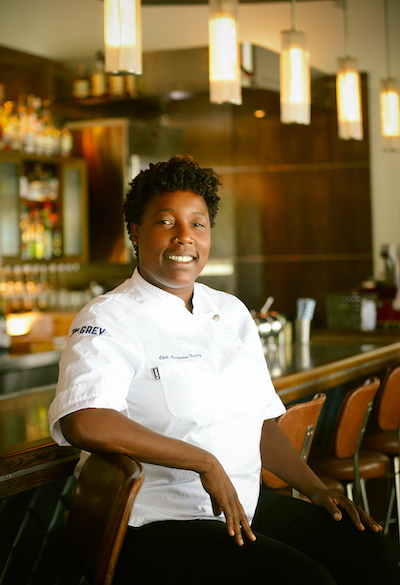 Chef Mashama’s The Grey is one of the country’s standout restaurants. Now in operation for nearly a decade, the Savannah, Georgia-based concept was named one of TIME’s Greatest Places 2018, and was the subject of an episode in the latest season of the hit Netflix show, "Chef's Table." Her menu uses regional ingredients to create comforting and creative dishes that have attracted diners from around the world.

After graduating from ICE, Chef Rachel worked in fine dining throughout New York City before moving to Seattle in 2007 to open her own restaurant with her partner, Seif Chirchi. Joule serves refined Korean fare using classic techniques, and it almost immediately put the two chefs on the map. They landed a spot to compete on “Iron Chef” in 2010 and have been consistently nominated for the James Beard Award for Best Chef: Northwest. Now Chef Rachel and her partner are in the running for the country’s most outstanding chef.

When Chef Mary took over as Executive Chef of The Musket Room, a Michelin-starred restaurant in Manhattan’s Nolita neighborhood, in February of 2020, she took the bold step of transitioning the then seven-year-old restaurant’s menu of New Zealand cuisine to a menu that featured more global fare.

Clearly, the switch has paid off.

Chef Helen worked in real estate for a decade before enrolling in Culinary Arts at ICE New York. After working her way up at Chef Nicolas Abello’s L'Appart and Chef Daniel Boulud's eponymous two-Michelin-starred flagship, she opened her Vietnamese comfort food restaurant, Saigon Social, in 2019.

Chef Ayesha is on a culinary roll. Her Shuka offshoot, Shukette, was recently recognized by the New York Times as one of the city’s best new restaurants in 2021. Now she’s in the running for Best Chef in the state for her accomplishments at her first restaurant, Shuka, a Mediterranean eatery she opened in 2017.

Ever since earning her diploma in Health-Supportive Culinary Arts from ICE New York, Chef Shennari’s star has been quickly rising. Her vegan soul food restaurant, Cadence, has earned much acclaim from the likes of the New York Times, Tasting Table, Esquire, Resy and VegOut. Now the James Beard Foundation is recognizing Chef Shennari for her talents, putting her in the running for emerging chef.

Chef Sohui is another ICE graduate to be honored by both the New York Times and the James Beard Foundation. The first iteration of Gage & Tollner was open from 1879 to 2004, but it wasn’t until 2021 when Chef Sohui and her business partners brought the iconic restaurant back to hungry New York City diners. Patrons and critics alike are happy to see the famed institution return.

Chefs Ayesha, Shenarri and Sohui were all recognized by the New York Times for having outstanding restaurants in 2021.

What Is a Sous Chef?