Have you been to a fine dining restaurant in, oh, say, the last twenty years? If so, you may have wondered about the mysterious ant-sized leaves carefully placed on top of your dish—probably using tweezers and perhaps some under-the-breath cursing.

Where did they come from? What are they? Are they grown using smaller seeds? Are they grown in tiny pots? Are they harvested by children? If I’m paying $38 for a main course, why is everything on the plate so small? Unless you haven’t read the title of this blog post, you won’t be surprised to learn that these leaves are called microgreens. Whoever christened them had a wild and fanciful imagination. But seriously, microgreens are very cool—the nuttiness of arugula packed into a tiny, pretty leaf; the bold pink color of an amaranth petal; a note of basil with just the right intensity to balance a bite of tomato. No chewiness, all flavor. You can see why they’re so popular among chefs.

The Birth of Microgreens

No one’s completely sure when and where microgreens first started turning up on plates. It was most likely in San Francisco in the 1980s. The area had the perfect terroir for the growth of microgreens—the soil, California climate, and not to mention, the constant flow of fresh, green, Silicon Valley dollars to support fine dining. But there’s no strict USDA definition of a microgreen, versus a cress, a sprout or a baby leaf—green varietals which many would argue predated microgreens.

Technically, “cress” refers to the stage when a seed has just sprouted its first cotyledons—those teensy first sprouts, normally two, but occasionally one or more. Plants with two cotyledons are called “dicots.” Inside the cotyledons is a “food reserve” for the plant, to be used until it can extract enough energy and nutrition from the sun and the soil (i.e., begin photosynthesizing).

After that stage the cotyledons either start photosynthesizing or drop away. In some types of plant, the cotyledons last only a few days; within others they can exist for a year or more. These minute cotyledons on a fine stem are what people normally think of when talking about microgreens.

Getting Your Hands On Microgreens Now that you know about cotelydons, the question becomes: where can we find them? You can often find microgreens at your local farmers’ market. For example, at the Union Square Greenmarket in Manhattan, usually there are at least two high-quality vendors selling a few varieties of live and cut microgreens. Not to mention, at Farm.One, we grow over fifty varieties to order.

Larger restaurant suppliers often carry them as well, though these sources can be hard to access for a home chef. Many chefs try growing their own micros. Unfortunately, the labor, climate and knowledge required to grow them successfully often leads to chefs giving up.

Some restaurants order live microgreens, still rooted in their growing medium, which extends their usable life and keeps them fresher. The downside is that the micros need to be cut by hand and take up a fair amount of space.

Planting & Growing Your Own Microgreens

What if you're determined to grow your own microgreens? Technically, almost any herb or green can be grown as a microgreen. In practice, many varieties are too spindly or weird-looking in their awkward childhood phase—ugly ducklings that won’t help a plate’s appeal.

Many also simply don’t have much of a taste until they mature, putting them into dangerous non-functional garnish territory. And sometimes the seeds are just too expensive to grow en masse. You can plant microgreens in anything neutral that allows them access to moisture, nutrients, air and some light.

Since micros do develop roots, you want something porous and thick enough for them to build a little foundation for themselves. At ICE, we mostly use rockwool, which is sort of like an inert cotton candy made of stone, or sometimes coconut husk.

Microgreen seeds are planted very densely, but far enough apart to avoid mold and so that the seeds get enough light without crowding. They should also be close enough together for an efficient use of space. Growers will often use a certain weight of seeds per square inch, rather than the traditional concept of spacing individual seeds.

For example, we plant our micro basil at 0.177 grams per square inch. (Hopefully this mixture of imperial and metric units made you wince.) Within a standard 10” x 20” grower’s tray, you might be using hundreds or even thousands of seeds for some varieties.

Talk about efficiency. A selection of different micros can be grown together, which provides an attractive array of tastes and colors. For example, micro amaranth, arugula and kohlrabi commonly appear together. But not every mix will work, as different varieties have varying growth rates.

For this reason, mustard (fast) and beets (slow) would be a difficult mix to grow successfully. The mustard would quickly crowd out the beets and you’d be like, “I should have read that ICE blog post more carefully before I wasted 12 precious grams of seeds.” Told you.

At ICE’s hydroponic garden, we grow our micros in trays in a “flood and drain” hydroponic system. A nutrient solution floods them either eight times a day, or twice a day depending on the growing medium. We use LED lights and waft a gentle breeze across the plants to discourage too much moisture buildup causing mold. And for those sexy wind-in-the leaves photoshoots. 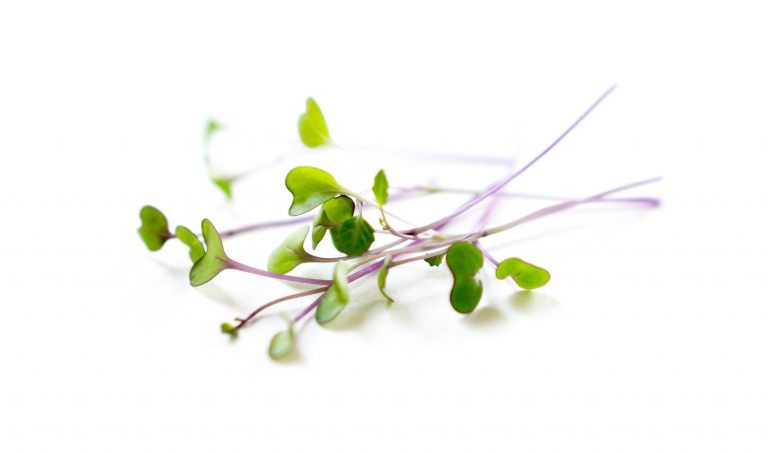 Harvesting those Greens Depending on variety, many micros are ready to harvest between 7 and 14 days old. You should be looking for a healthy mini plant that is 2-3 inches tall and has developed the leaf structure that you want. This could be cotyledons or it could include a number of mature leaves. It really depends on the plant and the aesthetic you’re seeking on the plate.

If not selling the live plant, many growers simply harvest by hand with scissors, but this can be incredibly time-consuming, making the whole process completely uneconomical. The more adventurous use a chef’s knife and cut horizontally, like filleting a fish as shown here. It’s possible to get things done faster with mechanized shears, demonstrated here. A lot faster.

But if you have a phobia of losing a few fingers, probably best to stick with the scissors, go slowly and not use SnapChat at the same time. If you’re just using micros for your own cooking, you can cut as you need and the other, uncut micros will happily live for several days or longer.

More nutritious? Maybe… Glucosinolates are one of the micronutrients in kale that makes the plant so healthful that pretentious people wear t-shirts about it. Interestingly, the food reserves of those little cotyledons in microgreens turn out often to contain far more glucosinolates than an equivalent weight of a mature plant. It’s for this kind of reason that a small number of recent studies suggest that microgreens are more nutritious than mature leaves.

For example, red cabbage microgreens have six times more vitamin C than mature red cabbage of the same weight and nearly seventy times more Vitamin K. The most nutrient-dense micros seem to be red cabbage, cilantro, garnet amaranth and green daikon radish. Growing broccoli sprouts at home may be the easiest way to access this kind of nutrient boost.

However, microgreens have not been extensively studied and to date there have been no large-scale epidemiological trials. Maybe because there are very few non-billionaires eating measurable amounts of micros on a daily basis. So it’s probably safe to say they are very good for you and leave it at that. But also best not to assume that sprinkling a few microgreens on a heaping plate of fried chicken will balance everything out. 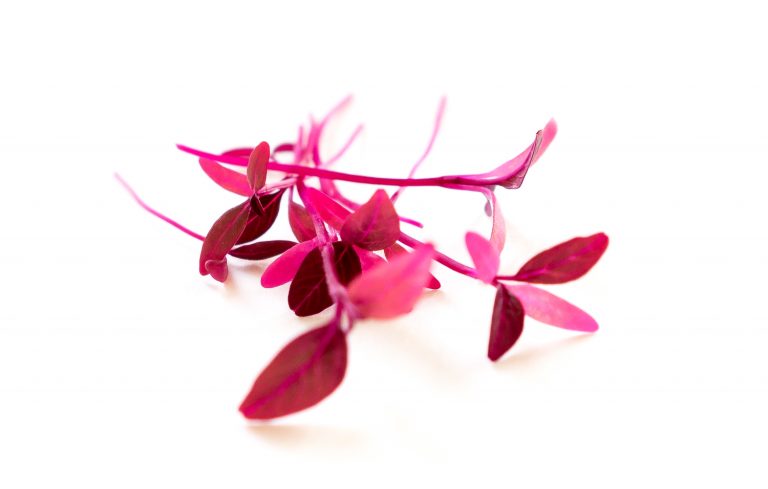 Everything in moderation Like chili oil or a touch of wasabi, micros are perfect in small doses and in the right places. Used to complement the flavor and composition of a delicate dish, they can be delightful, subtle, even exquisite. But sprinkled with abandon throughout a menu, they lose appeal.

If we all use microgreens with abandon, they might soon be as uncool as the once-ubiquitous sprig of curly parsley. If you find yourself casually dropping a random handful of micro amaranth onto a plate of overcooked steak and lumpy mashed potatoes, with the hope of somehow elevating it to a higher plane, STOP. Make the food great and only then occasionally use a micro to add an accent.

For the home cook, microgreens can be a fun and simple way to add a bit of color to your dishes and can help take your dinner party to a more sophisticated level. Look out for them next time you’re at the farmers’ market, and give them a try—or better yet, try growing your own.

You're invited: Click here for more information on ICE's career programs, then come visit the hydroponic garden yourself.