With training that spans Manhattan’s finest kitchens and more than eight years running product development for FreshDirect, it’s safe to say that ICE Culinary Arts & Culinary Management alum Tina Bourbeau can tackle even the toughest of challenges. We checked in with this all-star grad to learn more about her path from student to the distinguished title of senior director of research & development. 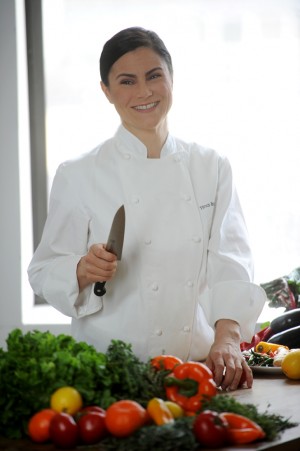 “My whole career has been defined by connections—knowing someone who knows someone has almost always led me to my next job,” says Tina. “For chefs just starting out, I think that’s essential—realizing the value of a strong network.” In fact, it was a family friend who first introduced Tina to ICE (then called Peter Kump’s New York Cooking School), kick-starting her New York City culinary career.

Prior to studying at ICE, Tina pursued a bachelor’s degree in anthropology at the University of Florida in Gainesville, FL. While in college, she worked at a range of different restaurants—vegetarian, Lebanese, pizza, continental—but of all the styles she experienced early on, it was Japanese cuisine that ignited her passion most. When Tina arrived in New York, she was enamored with the Japanese-influenced, seafood-centric style of Oceana. While studying at ICE, Tina worked at the fine dining restaurant part-time, eventually finishing her externship there and then taking on a full-time role. Soon after Tina was hired full-time, famed chef Rick Moonen took the helm at Oceana and became a mentor to her. “I loved working for Rick. He was a maniac, and I was so down with that. He was unlike other chefs. For example, when he learned about my obsession with Japanese food, he took me to the newly opened Nobu for dinner—with the intention of making an introduction so I could potentially work there. Who does that for their line cooks?”

Years after Tina worked for Moonen, he continued to be a staunch supporter of her projects. “It was Rick who later recommended me to be a contestant on Top Chef  (I was selected to be a contestant for Season 10), and my experience with him is a testament to the importance of maintaining strong professional connections.”

Despite Moonen’s efforts, Tina would have to wait a few more years for an opportunity at Nobu. Her next job came at CT, a three-star Michelin outpost headed by Chef Claude Troisgros (of the famed French culinary dynasty) with Laurent Tourondel as chef de cuisine. There, Tina worked alongside some of the world’s most noteworthy culinary leaders. “Paul Bocuse was Claude’s mentor, so he came and did a one-week degustation menu with us, and we did a similar project with father and son team Pierre and Michel Troisgros. This was a time in New York dining when French restaurants were the hottest thing.” When Claude decided to close his New York outpost, he generously continued the campaign to get Tina a position at Nobu by way of a personal introduction to Drew Nieporent of Myriad Restaurant Group. That meeting provided Tina with the coveted chance to work directly under Chef Nobu Matsuhisa himself. “At that time, Nobu was a person—not a corporation—and there was no chef, no person more fascinating to work with. On the very first lunch service I worked, I spotted both Alice Cooper and Luciano Pavarotti in the dining room.” Tina stayed with Chef Nobu for two and a half years. Eventually, she became the head kitchen chef for the opening of Next Door Nobu, which, under Tina’s supervision, gained a New York Times three-star review. 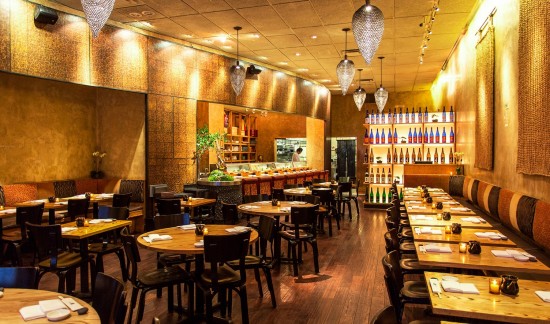 Then Tina got a call from her former chef de cuisine, Laurent Tourondel. He was opening a new restaurant called Cello and asked her to join the staff as sous chef, which she readily accepted. “The cuisine at Cello was super haute French seafood—similar to Le Bernardin but much smaller. At the time, Cello, Danube, and Union Pacific were the big three restaurants in the city, so everyone knew everyone, and it was a very elite group of chefs and cooks. I have a photo on my desk today of the people I worked with at Cello—almost every one of us became incredibly successful.”

After years in the city’s top kitchens, Tina began to wonder if there might be other opportunities outside of restaurants. She returned to ICE to pursue a diploma in Culinary Management while also freelancing for various projects. Eventually, Tina found herself back in the kitchen as the executive chef for Nicole’s—one of NYC’s original farm-to-table restaurants in designer Nicole Farhi’s boutique. “I changed the menu six times a year at Nicole’s, keeping entirely with the seasons,” says Tina. “It was a new concept in the city at that time, and it was also my first glimpse into a lunch-only service situation. What’s more, it was the first time I wasn’t working the typical nocturnal schedule that most chefs keep.” A couple of years later, Tina’s husband (who is also a chef) put her in touch with a contact at FreshDirect. At the time, the company was creating the position of director of research & development and was looking for a chef with extensive restaurant experience. When they learned of Tina’s interest, they jumped at the chance to bring her in for an interview. “No matter where you work, if you end up doing hands-on work in the food industry, technique and foundation come first. Period. I didn’t specifically have product development experience before my time at FreshDirect, but I had applicable skills that allowed me to take on that challenge,” explains Tina.

Today, Tina’s skills are put to the test daily at FreshDirect. From recipe conceptualization, tastings and product evaluations to leading the team that transforms each idea into customer-ready products, it’s a much different ball game than a restaurant kitchen. “Every single day, I’m doing something new. Our volume of production has increased dramatically from when I started. But my restaurant training proved to be invaluable—I modeled all of the processes I put in place at FreshDirect around the intense restaurant structure I was so accustomed to.” What makes Tina’s accomplishments even more impressive is that, throughout her career, few other women were working in restaurants. “I was almost always the only woman in the kitchen,” says Tina, “but that motivated me. For me it’s not about standing apart, it’s about being a great chef—no matter your gender. If you make delicious, beautiful food, the work speaks for itself. It shouldn’t be about anything other than that.”

Ready to kick-start your restaurant career? Click here to learn about ICE’s programs in Culinary Arts and Culinary Management.