In Search of the Perfect Fish and Chips Batter

Growing up in England, it was common for me to eat fish and chips regularly. A Friday night at the “chippie,” as we would call it, meant standing in line at the local fish bar, experiencing a sensory explosion while shuffling to the counter to place our order. The endless sounds of sizzling, batter-drenched cod, the sight of steam clouds rising from the deep vats of fat jostling a fresh batch of chips, and the scent of malt vinegar sprayed onto paper-lined parcels at the checkout cling tightly in my memory.

In England, fish and chips are a humble, affordable and tasty staple, mostly served with mushy peas that are made of mashed peas, seasoned with salt and pepper and a splash of vinegar and neatly packed away in a Styrofoam container. The fish of choice is cod, though haddock is being used much more frequently as the overfishing of cod diminished the natural supply. The chips are peeled and “chipped,” cut by machine into finger-length pieces, blanched at a low temperature before being fried until golden and crisp, liberally dusted with salt and doused in malt vinegar.

In my culinary career, I really haven’t had too much experience cooking fish and chips in the dining room. When creating such an iconic dish, I want to make sure that it’s nostalgic, delicious and ultimately as crunchy as possible. The chips are no problem nowadays. Heston Blumenthal has paved the way for the triple-cooked chip and its formula has become a standard operating procedure among kitchens worldwide, as demonstrated by Chef Palak Patel in the video below. Recipes for the batter are more varied and in my recipe bank alone, I have several variants of fish batter, all for the same application, and I had to test which one is best.

In recent years, fried foods have been scoffed at due to the demand for healthy food items. However, it must be noted that if a piece of fish is battered and fried correctly, the fish and the batter should be very limited in fat. When the batter does its job correctly, it forms a firm and full layer around the fish, in fact steaming the fish delicately inside this protective coating, repelling the oil. Once placed onto absorbent paper or other material, residual grease on the batter is at an extreme minimum.

I set about testing to determine my perfect batter for fish and chips, which must touch several points for success. First, it must relate to traditional fish and chips in England. It is common nowadays to morph culinary applications so far through research and development that often the memories that we are attempting to capture are lost through the transformation. Second, it hits all the key characteristics of a well-made piece of battered fish: The fish must be beautifully cooked inside, the batter adhered correctly to serve as a barrier to the oil and perfectly steam the fish protected inside. The color must be an even golden brown, and above all, it must be crisp and flavorful.

To begin my test, I considered the components of a batter: milled wheat, added starch, a liquid, and often an agent for formulating air within the batter for light texture, along with binders and thickeners for stabilization. I would make five batters and conduct a sensory test to evaluate adherence, color, texture and flavor, with scores from 1 to 10. 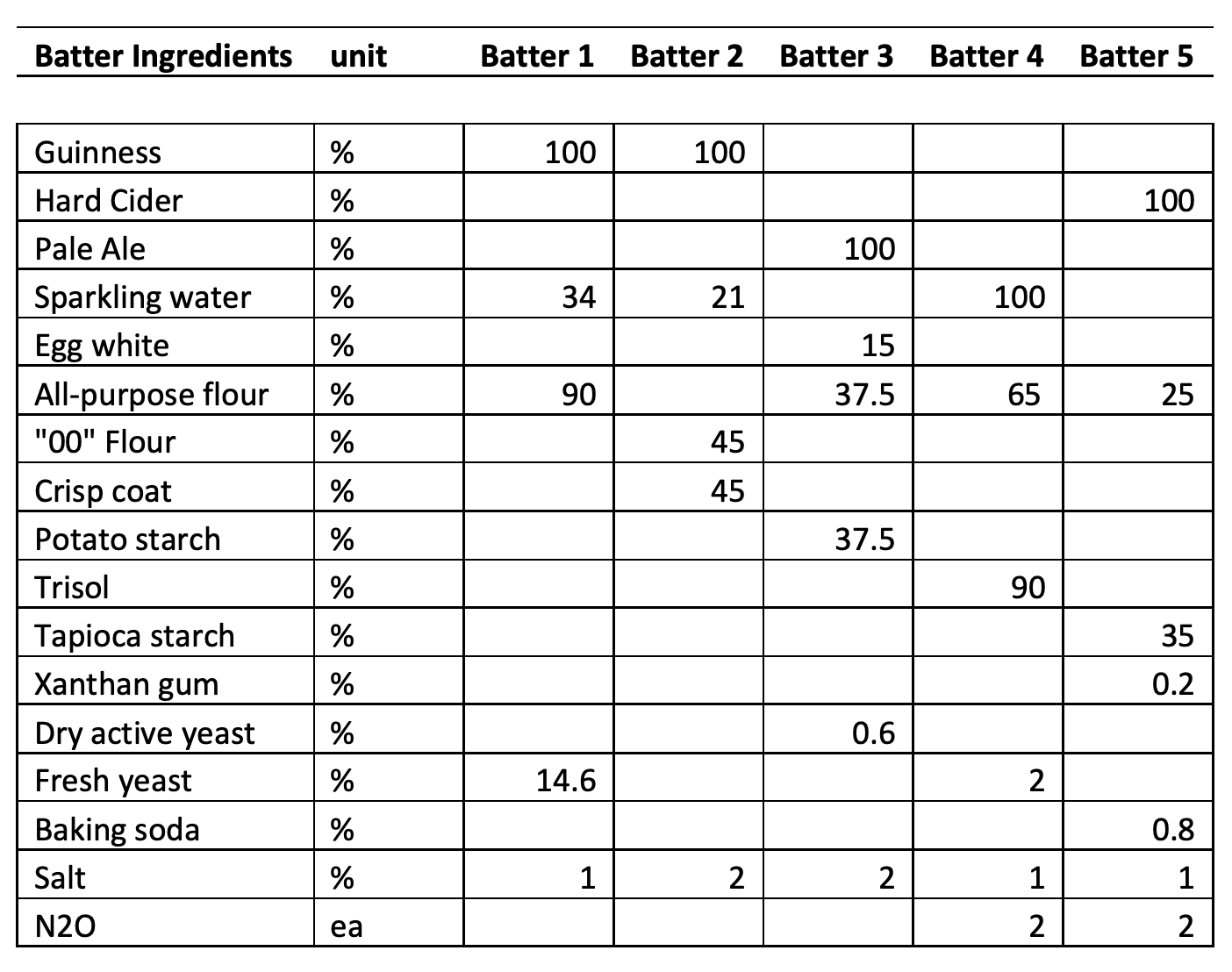 For the tests, I cut even pieces of cod weighing at 100 grams. Each was seasoned with Kosher salt and white pepper and then dredged in all-purpose flour before being placed in the batter. I cooked each piece of fish at 185 C/365 F until golden brown and buoyant. Once the fish was cooked, I placed it on absorbent material and inspected for color and texture. Once marked, I split open the fish and inspected its timing (how correctly the fish is cooked) and its flavor.

Although the test is purely sensory without scientific metrics in terms of investigation, this method gives me a clear indication of results and allows me to revisit my findings with greater focus if needed.

The highest performer, as indicated in the table above, was Batter 1, made with Guinness, sparkling water, all-purpose flour, kosher salt and fresh yeast. The batter is whisked lightly until just combined and left for 45 minutes for the yeast to do its work and for the gluten to relax. This batter scored evenly across the board and produced the best flavor. Other batters, such as Batter 4, scored higher for texture but were lacking flavor and adherence. I have noted that the purpose for that batter may be more aligned with something a touch more delicate such as shrimp or langoustine. 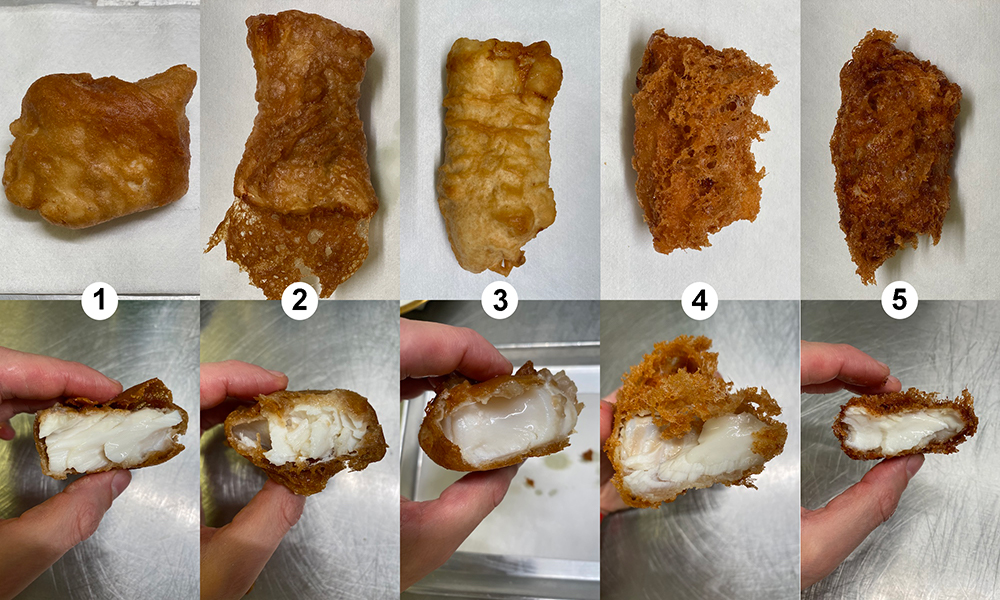 After this initial testing, I was interested to see if I could expand the experiment by optimizing some of the exceeding characteristics of other batters for an even better formula.

For example, I noted that batters 4 and 5 were in fact crisp but not as delicately crunchy. Batter 4 was made from Trisol and all-purpose flour. All-purpose flour is a common ingredient in batters due to its moderate protein content of around 11%. For more delicate batters, the protein content is often lowered by exchanging a percentage of wheat flour with cornstarch or rice flour, which tend to fry crispier than wheat flour. In Batter 4, the crispiest in the sensory test table, Trisol, a wheat dextrin, was used. This created a beautiful coral-like batter made from many strands, which was indeed crispy but did not work well for the fish and chips application as it was too light. Instead, I would add a mixture of cornstarch and wheat dextrin in a product known as Evercrisp. Wheat dextrin is a byproduct of cooking wheat such as the crispy brown top of a loaf of bread. In the formula of Evercrisp, it is mixed with cornstarch and acts in conjunction with wheat flour at a ratio of 4:1 (flour to Evercrisp) to aid in texture and coloration.

Next, I needed my batter to remain buoyant and have many air bubbles to crisp. Carbonation in lager, beer and sparkling water do this job well, however there is a common problem with using the tasty Guinness as I did for this batter. Once the Guinness has settled, the texture relies on the active yeast and the sparkling water to maintain its light nature. Modern batter applications often use nitrous oxide (N2O) to maintain this. The solubility of carbon dioxide increases when the batter increases in temperature, so less soluble Nitrogen can be added to maintain or improve this.

This final batter (5) was where I was able to stop. I achieved a more delicate crisp, a well-timed piece of fish along with the coloration of the batter, and most importantly, the flavor was where it needed to be to send me down memory lane.

One of the most beautiful things about the culinary world is the capability of new ingredients, science and equipment to enhance already fulfilling dishes and recipes. Some are afraid to dabble with classic recipes for fear of losing the dish's identities or being scoffed at by traditionalists.

However, it is human nature is to adapt and improve. It’s what we do best. This test offers a path to explore other applications, such as the use of Trisol for more delicate fish or vegetables. For now, I’m content with this version that has become my perfect batter.

Connect with admissions to see more research and development in the Culinary Technology Lab on a campus tour. Study fish cookery with Chef Barry in Culinary Arts.

7 Surprising Ingredients You Can Grill