This Culinary Arts grad made the switch from back of house to front of house.

David Schneider built his restaurant industry resume working for Union Square Hospitality Group and Altamarea Group before becoming the Director of Operations at Portale Restaurant. Familiar with career changes, David had to leave the kitchen for management due to a medical condition and has flourished since.

From a young age, food was a major influence for David Schneider (Culinary, ‘02). “I grew up in a family of foodies,” David says. “In Huntsville, Alabama, there weren’t a tremendous number of great restaurants. When we were on trips, our itinerary was based around the restaurants. While dining, we were always planning that next meal.”

Despite these childhood culinary joys, David tested out a few professions before he pursued cooking as a profession. In his early 20s, he moved to New York and tried his hand at real estate, bartending and acting — none of which were a fit. “Regardless of what I should’ve been doing, like studying a monologue or preparing for an apartment showing, I was always in the kitchen practicing and coming up with that next dish,” he admits.

After about a year in the city, David realized that food should be more than a hobby and enrolled in Culinary Arts at ICE. He took night classes while working as a server at Petrossian during the days and weekends. The knife skills, discipline and insights from instructors that David gleaned from culinary school were coupled with exposure to a high-end restaurant, providing him with a well-rounded education that prepared him for his externship. 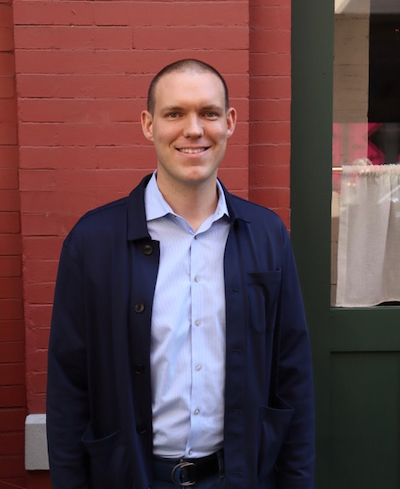 David completed his mandatory hours at 71 Clinton Fresh Food and stayed there for nearly two years as a full-time cook gaining experience as garde manger and expediter along with working the fish and roast stations. “I was able to wear all the different hats, which was a dream come true,” he reflects.

But when David hit his 18-month milestone, trouble arose. “I noticed that my skin was really starting to deteriorate on my fingers, hands, wrists and forearms,” he recounts. “I learned from a dermatologist that I had a bad case of eczema and that the conditions were exacerbating the situation.”

David didn’t take the news lightly. “I didn’t want to just walk away from it,” he says. “I got a few different opinions and that was the consensus. As long as I subjected myself to those conditions, my skin would continue to find itself in that miserable state. I was faced with having to pivot and figure out something else.”

At a crossroads, David decided to apply to college. He considered hospitality programs but ultimately followed his passion to study film at Columbia University and worked as a server on the side. “I never really stepped away from restaurants completely,” he explains.

While he enjoyed the classes, film school actually deterred David from a career in movies. “I met a lot of very talented filmmakers and screenwriters who were still struggling professionally and it painted a picture for me that was less than attractive,” he describes. “I didn’t feel like talent was enough to achieve success, which ultimately scared me away from doing that.”

After graduation, David determined that restaurant management was his desired path and set his sights on Union Square Hospitality Group (USHG). “I read Danny Meyer’s "Setting the Table" and knew that was a restaurant group that I would die to work for,” he says. So when he got hired at MoMA’s Terrace 5 and Café 2, he was thrilled.

The gig proved to be the ultimate introduction to management, and David’s supervisor was a seasoned USHG general manager who imparted her wisdom to him. “She helped me establish what I felt was a really strong, principled management foundation that I’ve tried to continue to build on all these years later,” he shares.

In search of a fine-dining job and opening experience, David secured a manager position at A Voce Columbus, where fellow ICE alum Missy Robbins (Culinary, ‘95) was at the helm. “It was fantastic to work closely with a chef of her caliber, and I lucked out again to have another great GM as a mentor,” he says of the rewarding and grueling post.

Then David was presented with an opportunity to become a floor maitre d’ at Marea, which he couldn’t pass up. The unique, service-focused role combined captain, maitre d’ and beverage responsibilities and kicked off his eight-year tenure with the Altamarea Group. “It was a very exciting environment: busy every night, a celebrity-filled room, 10 billionaires shoulder-to-shoulder at any given time, an incredibly high check,” David says.

He was promoted to opening general manager at Ristorante Morini for almost three years, followed by stints at Ai Fiori, Vaucluse and Marea once again. David had no plans to leave, as he was happy, fulfilled and had space to grow, but he was approached with a compelling offer.

Celebrated chef Alfred Portale wanted to partner with David to debut Portale Restaurant, a seasonally driven, contemporary Italian spot in Chelsea. “It was a no-brainer,” David says of his decision. “It was time for that next challenge.” So he took a leap of faith, left all his close colleagues and pushed himself outside of his comfort zone.

Portale premiered in mid-November 2019 to much fanfare. Into the beginning of 2020, the restaurant received positive reviews and the demand for reservations was “through the roof.”

Of course, the pandemic was a major blow. Portale closed for five months, reopened in August, closed again for the bitter winter and reopened again in March. “It was particularly hard being a young restaurant that had just gone through the review period,” David admits. “We were looking to double down on that attention and all that momentum has been lost.”

Now, the team is joyfully reconnecting with loyal guests and meeting new diners looking to return to a version of normalcy. With better weather and higher vaccination rates, they're optimistic, and David has found his calling.