Cheese rinds are understandably mysterious, as something that’s definitely a part of the cheese, but also seemingly apart from the internal paste that makes up what we love most about cheese. As a cheese instructor, the question that is almost always asked at every class is, “can I eat the rind?”

The short answer to that question is, yes, you can eat the rind — any and all of them.

If you’ve ever taken a cheese class, you may have already heard a certain chestnut that cheese instructors, (myself included) love to share: “All cheese rinds are edible, but not all cheese rinds are palatable.” The edible part is easy enough: all manner of cheese rinds, including non-dairy materials such as wax, cloth, leaves or bark are technically edible. They must be food grade in order to participate as part of the cheese, so yes, you can eat them, and they will cause you no harm.

Whether they are palatable or even delectable is a different issue. It’s a matter of whether or not a particular rind enhances your experience of eating the cheese. In the case of the extraneous materials listed above, the answer is probably no. The thick, red wax of a gouda won’t kill you if you eat it, but it’s hardly appealing as something that enriches the cheese’s flavor or texture. (You’ve probably ingested food grade wax more often than you think, however. Those shiny apples at the grocery store are coated with it, and the sturdy rind of certain Manchegos also may have some wax involvement.)

Here we’ll focus on those rinds that aren’t extraneous materials, and that evolve as a natural part of the cheese. These primarily fall under three categories:

What are cheese rinds?

First things first, what are cheese rinds, actually? How are they formed, and what are they made of?

Josh Windsor, an affineur for Murray’s Cave Aged cheese program in New York City, is well-acquainted with cheese rinds. (To note: affineur comes from the French affiner, “to refine,” and refers to people who work in cheese caves on the aging process, ushering cheeses from their adolescence as mostly flavorless, colorless wheels, into the glorious varieties of finished cheese that they will eventually become.)

“A cheese rind is a microbial community that grows on the outside surface of a cheese,” says Mr. Windsor. “It can be formed of a handful of organisms — like the powdery white Penicillium camemberti mold that gives us Camembert — or a multitude of microbes living in complex communities like the rind of clothbound cheddars. These microscopic populations break down the fats and proteins in cheese and contribute greatly to texture, flavor and aroma as the cheese ages.”

An affineur’s job is to control the atmosphere in cheese caves in terms of temperature and humidity, to encourage certain microbes and discourage others during the formation of the cheese rinds. Various cheeses may be moved between atmospheres, flipped to ensure even ripening, washed, soaked, vacuumed, coated, massaged or patted down during the process, all of which have an effect on the developing rind.

Not all cheeses have rinds, however, as is the case with fresh cheeses like feta and mozzarella that don’t undergo any cave aging, or certain blue cheeses whose exteriors are controlled with aluminum foil or other materials to prevent a rind from forming. 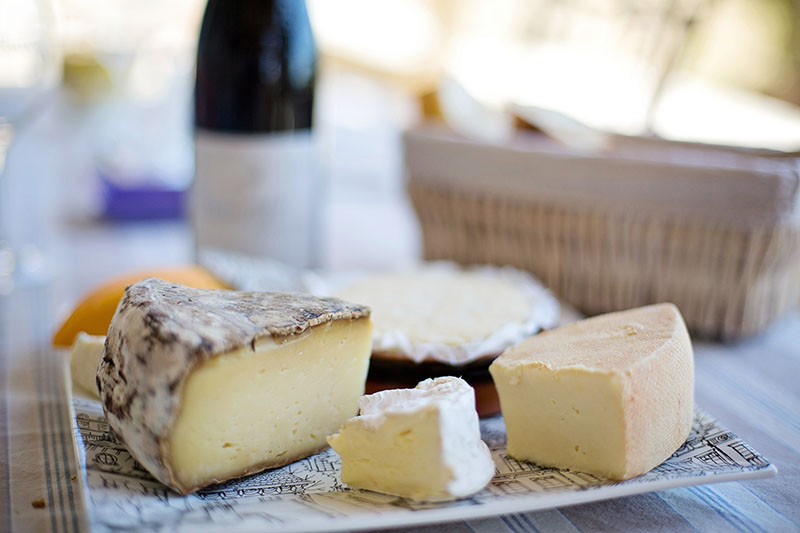 One of the key ingredients of cheese are cultures: certain microbial strains that are used to inoculate the milk and govern what the cheese is destined to become. In the case of bloomy rind, or soft-ripened cheeses, this is typically one of two strains: Penicillium camemberti, as Windsor describes above, or Geotrichum candidum.

Penicillium camemberti is easily identified as the snow-white, mostly smooth rind that coats wheels of Brie and Camembert, and many other cheeses that are made in the bloomy rind-style. (In actuality, Penicillium camemberti is a very fluffy mold. It’s the frequent patting down of the mold by the affineur that enables the smooth outer texture.) Geotrichum candidum rinds also have a mostly white look about them, but additionally take on a wrinkly, mottled, almost brain-like appearance. In high-quality cheeses, these types of rinds should be very much connected to the cheese. A desirable, gooey creamline may develop between the paste and the bloomy rind due to the continual breakdown of milk protein by the cultures, but bloomy rinds should not easily separate from the paste.

Whether or not to eat the rind of a given cheese is a largely personal decision, but it’s important to at least try most rinds — unless they are obviously wax or bark, etc. — to get a sense of what they contribute to the cheese, and whether that enhances your experience of eating it. In the case of most bloomy rinds, however, I’d argue strongly in favor of always eating it: a majority of the flavor for these types of cheeses comes from their rinds. (No more scooping out the Brie from under the rind.)

Washed rind cheeses came to be because someone actually attempted to clean aging cheese wheels from mold that was forming on their outer surface. A saltwater solution applied to cheese, instead of stopping mold from forming, instead gave rise to a different strain of bacteria: Brevibacterium linens, which is the source of the telltale sticky, orange, aromatic mold that characterizes cheeses of this nature.

Although washed rinds happened by accident, the result was weirdly appealing. The aromas of washed rind cheeses can be complicated and even off-putting for some, but the interiors of these types of cheeses reveal meaty, earthy, umami flavors.

Washed rind cheeses come in varying strengths. Harder washed rinds, like Gruyère, can still have a meaty flavor, but only a little bit of funk from the rind. Taleggio is a good entry-level washed rind that is softer and definitely aromatic, but gentler on the nose than something like Époisses, which is famous for its pervasive aroma. Again, all of these rinds are edible, but the rind is definitely the strongest part of what is already a strong cheese.

If you’re trying to teach yourself to appreciate these kinds of cheeses, you may initially find the paste more palatable without it.

Natural rind is the broadest category of cheese rinds, encompassing everything else that occurs naturally in the aging environment when the milk hasn’t been inoculated with the bloomy rind cultures, the affineur isn’t washing the cheese to encourage that type of rind, or otherwise taking measures to prevent a rind from forming.

As evidence of the wide variety this category represents, Parmigiano-Reggiano, Stilton and Mimolette are all examples of cheeses with natural rinds. (Pro tip: if you’re not eating it, save the rind from pieces of Parmigiano-Reggiano to add flavor and texture to soups, stews and pastas or risottos.)

Natural rinds represent a mosaic of microbes, woven together by air to create the outer layer of a cheese, which can also be affected by the ambient flora of the cheese cave itself. They can have a range of colors, flavors and textures, and may or may not be especially delectable to eat along with the paste of the cheese. Some find that the older natural rind cheeses get, the tougher and less interesting the rind is to the palate, but some still have a surprising amount of flavor and enhance the overall taste of the cheese.