She’s been teaching a plant-forward life for two decades.

“I grew up with hippie parents with macrobiotic leanings…but also Julia Child and cheesesteak,” says ICE’s Director of Nutrition, Chef Celine Beitchman, about her roots. The Philadelphia native grew up in a (very) creative household; her father was a writer and a teacher while her mother was an artist, craftsperson, full-time parent and jack-of-all-trades. Chef Celine’s deep-seated roots also lie in the south of France — Marseille, specifically — as the family moved there when she was only three years old. That early-on exposure to different ingredients and simple cooking stayed with Chef Celine when she returned stateside.

It was during her high school years and her enrollment in City-As-School (CAS) where she began navigating the world of hospitality, working as an apprentice under Annemarie Colbin at the Natural Gourmet Institute, acting as a kitchen assistant and washing dishes. “My route was very old school, built out of European tradition, apprenticing and finding my curriculum through various kitchens,” she says, recalling of constant persistence and meeting with chefs like Daniel Boulud for advice. (After all, this was pre-Internet.) Wanting to return to France, Chef Celine, with the help of her father for translation purposes, sent off applications to some 50 restaurants in Paris. “I got 20 responses from people who were willing to take me on,” she says. “I chose those that were most interesting and that would pay.”

She landed at the lauded Le Dôme in Paris, serving up high-end seafood fare to Left Bank diners. “I was there for about a year,” she says. “It was pretty brutal — the hours were crazy.” Chef Celine recounts going in at 5 a.m. every morning to break down fish and prep bouillabaisse, work lunch service, take a nap in the service quarters where some of the other commis lived and then be back at the restaurant at 5 p.m. for dinner service. “I smelled like fish…cats would follow me home.”

Chef Celine returned to New York at 22 years old and landed at Larry Forgione’s American Place as a prep cook before snagging a line cook position that opened up when a hot-headed chef quit. “If you’re doing prep, it’s a great position to be in,” she says. “You have a lot of opportunity to see what’s going on when you’re doing monotonous work. (Tip for Students: Chef Celine’s point about having the opportunity to observe is even more true for students on their externship. “Look around you — be ready [to learn],” she says. 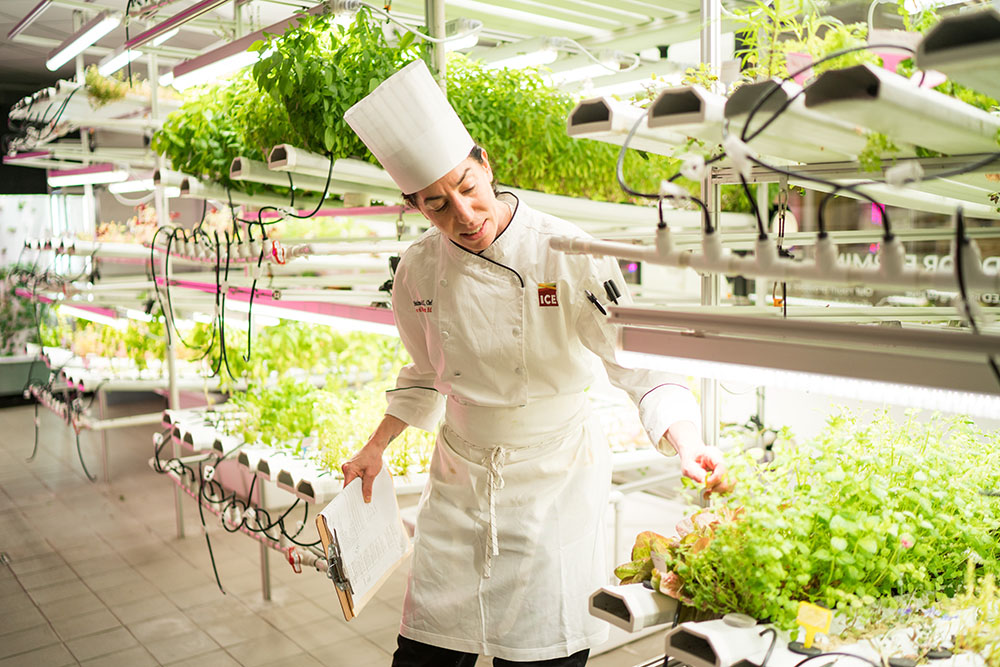 From there she went on to catering, landing at mega companies like great Performances and Creative Edge. Prepping for parties ended up being the bulk of her career. “It was the 1980s and 90s when catering was mayhem — a lot of work but super fun,” she says. (Her catering gig path even introduced her to fellow ICE Chef-Instructor Barbara Rich.) “For me, catering and private cheffing were the most valuable experiences in the kitchen, in that it was a constant challenge and it was a new menu every day, requiring honing production, practice and repetition,” she continues. “It was like a MacGyver era — there were no rules and you just had to figure it out, versus a fully-equipped kitchen where you can get used to routine.”

Catering then led to private cheffing, and then back to where it all started: Natural Gourmet Institute. Chef Celine taught classes at the Natural Gourmet Institute for over 17 years and continues spreading the good word (and work) here at ICE; her favorite lesson to teach doesn’t involve cookery at all. “I really like teaching the lecture-based nutrition classes because I really get to hear from my students when there otherwise isn’t time for it, to be able to parse out and contemplate some of the things we race through,” she says. ““I like to help them make connections with everything that we’re doing with the program, and with their own lives.”

She also encourages her students to move away from the term ‘plant-based.’ “I like to use the term plant-forward because it’s been totally co-opted by the vegan community and doctors who advocate that lifestyle,” she says. “Plant-based has lost its definition — it means that’s what we’re leading with but not that we’re exclusively plant-based. There’s a misunderstanding, in that we aren’t advocating a lifestyle, but introducing our students to a range of healthy dietary patterns and food choices that fit those.” This methodology is incorporated into her classroom.

In her free time, you can find Chef Celine cooking simple flavors out of her home kitchen in Brooklyn, as well as traveling, hopefully partaking in far-flung flavors she can’t replicate at home. “I really get excited by food that I can’t make myself,” she says, adding that Vietnam has sensational cuisine. “It’s either so simple and unadulterated or so extravagant. I think that extends to my cooking at home.”

Even outside of the classroom, she’s always teaching, whether it be to fellow colleagues, friends or even acquaintances. “We are the promoter of food sustainability,” she continues. “We are feeding the trends and we are birthing the trends here and that’s via our students. They’re seeing that.”