Fundamentals of Cheese: The Difference Between Parmigiano-Reggiano, Grana Padano and Pecorino

Italy has no shortage of firm, salty cheeses that have numerous culinary applications. They can be nibbled on their own, grated on top of pastas and salads or used to add texture and umami to soups and sauces.

When it comes to Italy’s top cheeses of this type, however, understanding the nuance between them can be the difference between creating a dish that is merely good, and creating one that is extraordinary. To that end, here we examine the differences between Parmigiano-Reggiano, Grana Padano and pecorino cheeses.

Along with Balsamic Vinegar of Modena, Parma Ham and many varieties of Italian wine, Parmigiano-Reggiano cheese is one of Italy’s most important culinary exports, and is referred to by many culinary enthusiasts as the king of all cheeses. (One New York City cheese shop — Saxelby Cheesemongers — only sells artisanal American cheeses with the exception of Parmigiano-Reggiano, because there’s simply nothing else that comes close.)

But how much do we actually know about the beloved Parm?

Parmigiano-Reggiano, as well as the other cheeses on this list, have PDO status, standing for “protected designation of origin.” This is a legal distinction used throughout the European Union, applied to products that have strict geographical boundaries and production standards.

Read More: How to Approach a Composed Cheese Course

Parmigiano-Reggiano has been in existence for over 1,000 years, and can only be produced in a pocket of Northwestern Italy, centered around the province of Parma. It is made from the raw milk of cows that are grass-fed in pasture, and collected both in the morning and the evening. The milk for Parmigiano-Reggiano begins the process of becoming cheese within hours of having been collected.

Both the fact that the cows only eat grasses and not additional grains, and the unpasteurized milk, are important distinctions of traditional Parm, which contributes to its incredible depth of flavor. Raw milk cheeses are permitted in the U.S. so long as they have at least 60 days of age, and Parmigiano-Reggiano is aged for a minimum of 12 months. This age distinction is also one of the major features of Parmigiano-Reggiano, deepening its flavors and contributing to its crumbly, almost granular texture.

Flavor-wise, it is both delicate and rich, with grassy, fruity, nutty and even meaty flavors in wheels with advanced age.

Grana Padano shares many similarities with Parmigiano-Reggiano: it’s a PDO cheese with a regional distinction in Northern Italy, made from unpasteurized cow’s milk and aged for a significant amount of time.

The differences in production, however, are what lead to the nuances between Grana Padano and Parmigiano-Reggiano. Cattle used for Grana Padano are allowed to feed on 50% grain matter in addition to grass-feeding, and wheels are aged for a minimum of only nine months. The grain-feeding creates a slightly fattier and sweeter milk, and the younger age creates a paste that, while still granular in texture, is slightly creamier and less crumbly than Parmigiano-Reggiano.

While Parmigiano-Reggiano enjoys a greater level of importance in the minds of consumers, Grana Padano is actually the best-selling PDO cheese in the world, with over five million wheels produced yearly. It is often less expensive than Parmigiano-Reggiano, which is an important consideration for a discerning chef.

While domestic parmesan is no match for Parmigiano-Reggiano, Grana Padano is an alternative that is well-worth considering, especially if its additional sweetness and body have something to contribute to your dish.

Looking for a recipe for some Grana Padano? Try out this Chef Frank's fettuccine alfredo. 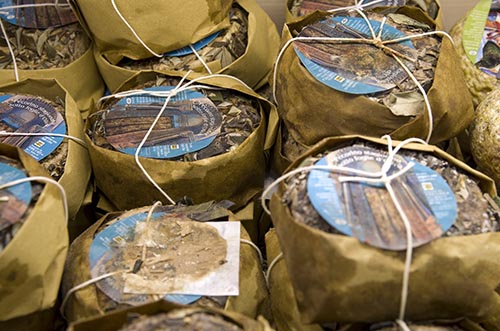 Pecorino (pictured above) is the name given to any sheep’s milk cheese produced in Italy, “pecora” meaning “sheep” in Italian.

On its own, pecorino is not name protected, though several specific versions of pecorino have PDO status: namely Pecorino Romano, Pecorino Toscana and Pecorino Sardo, among a few others, that refer to the places where they are made according to exact specifications.

While Pecorino Sardo, from the island of Sardinia, is actually the most widely made version of Pecorino (and also derives the storied Sardinian cheese casu marzu; google at your own risk), Pecorino Romano is the most widely known variety outside of Italy.

Pecorino Romano is actually older in recipe than Parmigiano-Reggiano, believed to have been first made over 2,000 years ago, and is a pasteurized milk cheese, aged for a minimum of eight months for grating varieties. Unlike the above cheeses, younger pecorino versions are available that are used more for snacking than grating because of their creamier texture.

The elephant in the room — or in this case the sheep in the room — is that animal milk is the biggest difference between Pecorino Romano and the aforementioned cheeses. Sheep’s milk is naturally fattier than cow’s milk, has an almost starchy, or lanolin texture to it, and a distinctly earthy or grassy tang in its flavor profile. (Feta and manchego are two other common sheep's milk cheeses, if you want to help yourself identify the particular flavor of sheep’s milk.)

As a cheese instructor, I can almost always identify hard, sheep’s milk cheeses for having an aroma that to me is unmistakably “pasta water.”

Speaking of which, Pecorino Romano is the hollowed-out wheel preferred for Roman pasta dish cacio e pepe, and is also frequently used in other Roman pasta dishes such as spaghetti alla carbonara.

More from this series: