Jeff Katz visited our New York campus for the August iteration of Meet the Culinary Entrepreneurs, speaking to Restaurant & Culinary Management students about managing a team, morale, investors and service. Jeff has been with Del Posto for 13 years and opened highly acclaimed Crown Shy in the Financial District this year.

Director of Restaurant & Hospitality Management Rick Camac asked Jeff about his transition from tenure with a well-established restaurant group to an entrepreneurial endeavor with Executive Chef James Kent. Here are the highlights from Jeff’s insights: 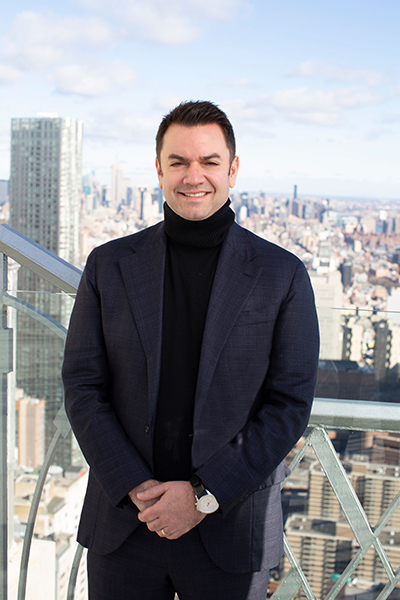 On his success at Del Posto:

I stayed. I often see a resume and someone’s worked at four of New York City’s best restaurants in the last three years: Why haven’t they stayed at any? To me, that’s more of a red flag than anything. In the kitchen scenario, it depends on how long those tenures were, where they were and how good their references are. In the kitchen, if you do a great job in one house, it’s not as frowned upon to jump to a new place. There, you’re learning techniques specific to cuisines or styles. On a management, dining room or operations team, you should stay there for a bit. You want job titles that sound like they’re getting bigger and better. At Del Posto, my title changed four times until it most recently changed to managing partner.

When you stay somewhere, you learn a culture, you create a culture, you become part of that fabric, and you can make that place your home. But when you jump in and out of roles, you’re always learning and always starting over. That’s one of the secrets to my own particular success. Land somewhere you really like and try to learn what seems to work.

On first jobs out of school:

Generally speaking, I never recommend joining a brand-new restaurant or restaurant group right out of school because it’s a little messy. My operation at Del Posto is tight because it’s been worked on. We’ve done every process eight times and decided which one of the 18 million processes that we do, works best for that restaurant. Whereas at Crown, we’re still throwing things at the wall and seeing if it sticks. It’s going well, but it’s still evolving. We’re not as good as we want to be, and we had a very charmed opening because James and my backgrounds attracted a great team and great press.

The wins and the losses are different because it’s the beginning of our public career on our own. Dining room guys very rarely get any real shine — the chefs always get the limelight. It’s changing a little bit, there are more known restaurateur personalities out there, but at the end of the day, you’re building the chef’s brand in a lot of ways. I’m lucky, my chef partner is an anomaly. He’s a great guy: even-keeled, level-headed, charming. We have to work on decisions together in a way that I have not had to do in a long time. From an entrepreneurial perspective, we get to make decisions and we live and die by them.

“The ambitious American restaurant, from former NoMad executive chef James Kent and business partner Jeff Katz, is reason alone for those who still think the Wall Street area closes up at 5pm to check out the scene.” - @nypost @stevecuozzo #crownshy #crownshyness

You definitely want to make sure as you go out looking for investors, that you are hiring and working with people who understand or can at least see the long-term vision. Restaurants are not equipped for quick turn around in terms of money.

If you’re thinking about starting a restaurant: all of the press, all of the Instagram, all the social media that you can do cannot get a customer to come back in the second time. That will just bring a person in the first time and it’s on you to win them at that stage.

At the end of the day, what happens at the table is the only thing that matters. New York City is fickle and it’s full of haters. You really need to win at every possible exchange — there are just too many restaurants out there.

“Good restaurants don’t rain down from nowhere, but Crown Shy came close” @nytimes ⭐️ ⭐️ ⠀⠀⠀⠀⠀⠀⠀⠀⠀ Thank you @nytimes and @pete_wells. We are so excited to join ranks 🙏🏼 #crownshy

Attitude is 90% of the game. I don’t care if you’re at Sweetgreen or Eleven Madison Park, you need to have the same amount of care. You never know who you’re going to meet. You never know the opportunity that’s going to pass you by because you weren’t being professional. More importantly, you need to be happy.

On his management style:

I’m pretty easy-going and forgiving as long as I think you care. Negativity spreads like cancer and can ruin the culture. If you find yourself with negative employees, you have to get rid of them. You give them a chance to get better. For the most part, we’re more teachers and coaches than anything else, assuming you care. The team is representing us. You have to show improvement and you have to show you care.

Pursue a career in Restaurant & Culinary Management at ICE.

Want to Launch a Food Product? This Book Can Help

Exit Strategy: How to Get a Greater Valuation For Your Concept