One of the great things about studying at ICE is the wealth of experience that each instructor brings to the curriculum. Culinary Management instructor Alan Someck is no exception.

As general manager of two perpetually packed Long Island restaurants for decades, Alan developed an understanding of what makes a restaurant not only successful but an integral part of the community. Between this role and his years of consulting work, Alan has the kind of expertise that only comes with time and the opportunity to study changing trends in the industry. At ICE, Alan shares his insights with each aspiring restaurant owner or food business entrepreneur who walks into his classroom. 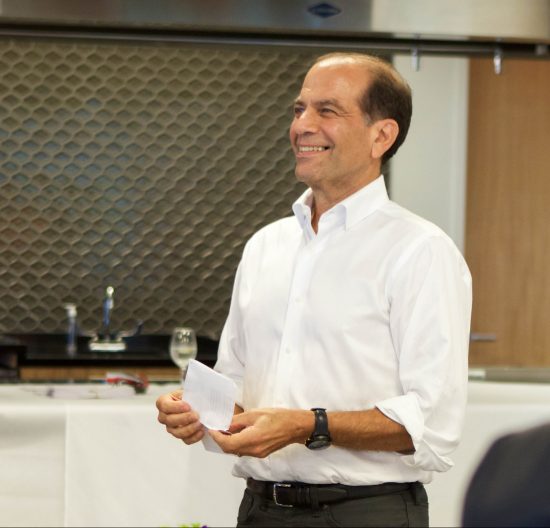 A native New Yorker with the restaurant industry in his blood (his father owned a seafood restaurant in Brooklyn), Alan didn’t initially gravitate toward the culinary world. It wasn’t until after college when he moved to San Diego that Alan was inspired to join the food industry.

With a shared desire for local, fresh produce, Alan and friends began a food co-op — a small operation where members would assemble in someone’s backyard and handpick their weekly produce. The co-op, which doubled as a community center, grew until it eventually relocated to a larger space that was previously a pool and dance hall.

It was during this era that Alan learned to tap into local needs and organize ways to meet them. Though he loved the Golden State, Alan eventually relocated back east, where he took the helm of two popular North Fork restaurants, both called Millie’s Place. Recognizing that the restaurant space had evolved into more than a place to eat, but rather, an extension of people’s homes, Alan infused Millie’s Place with the same sense of community that he helped to create in the San Diego food co-op.

Asked about the lessons gleaned from his time running Millie’s Place, Alan says, “Hook into the community. Get involved and create relationships with customers.” This entails everything from getting to know your customers by name to giving back to the community — Alan’s staff used to cook Thanksgiving dinners for seniors in the area.

A second lesson is to observe what’s going on in the industry. Alan explains, “Once a week, I would go out to another restaurant. Go to restaurants and food shows and learn from them. Your food should adapt to the current trends.”

Alan’s final piece of advice? Choose the right location. More specifically: a location that fits your concept. This and other vital elements involved in launching a food business or restaurant are the kinds of discussions that Alan has with each of his students.

Says Alan, “I start with the premise of, 'What’s the experience you want to create?' Let's work backward from that.” With New York City as a backdrop for his classes, Alan is also able to incorporate local restaurants and entrepreneurs into his curriculum.

From a guest lecture by Gabrielle Hamilton, author and chef/owner of the acclaimed East Village restaurant Prune, to a field trip into the bakery of Amy’s Bread, guided by owner and ICE alum Amy Scherber, Alan ensures that his students receive a comprehensive food business education.

Today, Alan continues to advise restaurant startups, franchises and restaurants aiming to solve operational conundrums. An avid cultural observer, especially when it comes to the way people eat, Alan keeps a constant pulse on the evolving food industry. Whether inside of the classroom or out, Alan is inspiring the next generation of food visionaries and helping to make their lofty business dreams a (profitable) reality.

Want to study with Alan and start mapping out your own food business? Click here to learn more about our Culinary Management program.