Behind the Product Development Process

As I took some time away after a busy holiday season to recharge and plan for the future, I thought more about creating a signature dish and finding a specialized niche. Even as a pastry chef, developing my own dessert recipe has always felt intimidating, especially taking into account the precision of baking and the difficulty of troubleshooting “in real-time.”

I was grateful to have my former chef-instructor from ICE's Pastry & Baking Arts program, Penny Stankiewicz, share some wisdom about the process.

“With recipe testing, the first thing I do is research recipes from my most trusted sources,” Chef Penny said. “I find at least three versions that have differences in them and compare those differences ... and I think about how that might impact the recipe.” She reiterated the importance of understanding the functional properties of your ingredients and how they work together. Sugar and butter, for example, affect not only the flavor but also the structure of your resulting product. “Being curious about your ingredients will lead you to learn so much and have much more success at creating your own recipes.”

Chef Penny also advised that when recipe testing, it’s most effective to change one aspect at a time in order to accurately isolate the difference it makes and proceed accordingly. “Changing too much at once will make it hard to know what is working best.” She continued, “And I keep excellent notes about my experience with it so I know what to fix.” As with any serious study of a subject, good note-taking is crucial.

Largely driven by curiosity, I wanted to create a mini bundt cake recipe and perused online recipes and ratios for a general framework. I had a vague sense that I could make a fresh and versatile take on mini bundts and that I was aiming for a moist, pleasantly dense cake with some structure, but not much else was fleshed out in my head. 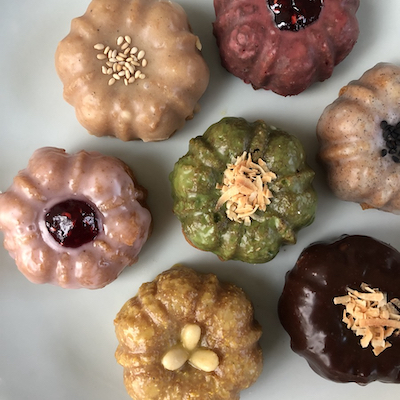 My first stab at a recipe turned out neither sweet enough nor moist enough — but I had a starting point. For Version 2, I tried upping the sugar, decreasing the egg and adding sour cream in hopes of boosting the moisture and sweetness. Although Version 2 was better, it was clear the cakes could be even more moist and flavorful. My mind wandered to cake flour: Would a combination of all-purpose and cake flours contribute to a more tender crumb that still retained structure? The answer was no: Version 3’s cake turned out overly moist. I did want to keep the increased vanilla and sour cream, however.

At this point, I was feeling discouraged — with every change I made, there appeared to be something else that needed fixing and adjusting. I decided to test a Version 4 that incorporated mochiko (sweet rice flour) along with all-purpose flour and increased the amount of egg back to Version 1’s recipe to note the effect on texture while keeping the amount of sour cream and milk the same as in Version 3. Turns out, I’d hit the nail on the head. The cake was soft, almost plushy, but with distinct structure. It was light and substantial at the same time, with good flavor.

Batches of mini bundts later, I had landed on a workable recipe. Through the numerous “errors,” I became more sure of what I wanted the end product to look like. Having three built-in taste-testers in my family was a huge plus, as was framing the process as experimentation rather than a strict, deadline-based project. 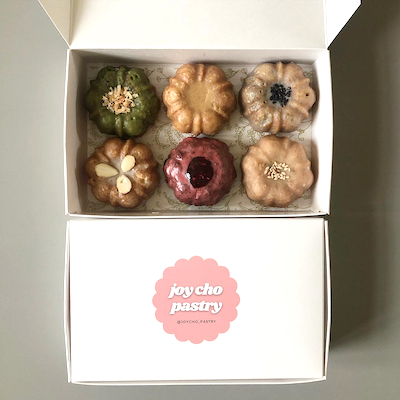 I named my product Gem Cakes because dressed up in glaze, they resemble gems visually and also represent little gems of flavor. I experimented with glaze flavors like black sesame, misugaru and maple-almond, ordered packaging and labels that are both functional and aesthetic, and began to roll out marketing in preparation for orders in New York City. (Stay updated on my website and Instagram @joycho_pastry.)

After testing various glazes to go with the Gems, I actually ended up scaling back the amount of sugar in the cake recipe. The composed cake was too sweet in tandem with the glaze. Even now, I know that my base recipe, and any of my glaze recipes, are subject to adjustment. Nothing is entirely set in stone, and there is a certain beauty to that fluidity — not to mention all the glaze possibilities out there!

As I put Gem Cakes out into the world, I’m increasing the number of taste-testers who can make the product even better. I learned that sometimes the starting point is not really knowing what you want to be known for, discovering that along the way, and continuously iterating and tinkering. Recipe testing your own signature dish takes patience, time and trust in the sometimes-wonky and often-frustrating process, but it is entirely worth it and the most hands-on way to learn. I can’t wait to do it again.

Follow Joy's entrepreneurial endeavors and explore your own dessert business with a dual diploma in Pastry & Baking Arts and Restaurant & Culinary Management.