After coauthoring 11 cookbooks, including Chrissy Teigen and Candace Nelson's, Adeena's first solo project focuses on her own Israeli recipes.

With three New York Times bestsellers under her belt as a coauthor, Adeena Sussman (Culinary, ‘06) decided it was time to publish a cookbook of her own. Based on her culinary experiences in Tel Aviv, "Sababa: Fresh Sunny Flavors From My Israeli Kitchen" is a culmination of a decades-long career in food and a lifetime of writing and cooking, using the Hebrew word for “great.”

In 2015, Adeena moved to Israel after meeting an expat American who is now her husband. She lived in Jerusalem shortly after college in the 1990s and visited the country frequently over the years. With a deep connection to its food and culture, as well as motivation from her relationship, Adeena chose to relocate to Tel Aviv and pivot her professional ambitions toward showing people how she cooks and lives there.

Adeena resides on the edge of the city’s famous Carmel Market, a bustling center for fresh produce, spices and more that is at the core of “Sababa.”

“The book is all about how to use all the staples of the Israeli kitchen in fun and fresh ways, through the eyes of an American woman who’s living in Israel and shopping in the market,” Adeena says.

Published in September, the book has been a hit, appearing on best lists by Bon Appétit, Food & Wine, and The New York Times. Adeena describes this industry recognition as a validating career milestone and feels equally thrilled by the public reception. Recipes like chewy tahini blondies and melted green cabbage have gone viral, while her oven-roasted artichokes and garlic dish seems to be among the most popular dishes of the worldwide quarantine.

Of course, this isn’t the first time Adeena has seen massive success. Before she embarked on her first independent project, Adeena spent 10 years writing cookbooks with other people. She co-authored New York Times bestsellers “Cravings and Cravings: Hungry for More” with Chrissy Teigen and “The Sprinkles Baking Book” with Candace Nelson. Lee Brian Schrager is another close collaborator.

Despite these credentials, Adeena wasn’t always on the culinary path. As a young adult, she considered pursuing culinary school after high school graduation, but chose to earn a degree in communications at Boston University instead. “At the time when I graduated from high school, culinary school was just a little bit of a different proposition than it is now,” Adeena explains. “I’m happy that it has become a viable option for people right out of high school.”

She spent a handful of years working in television before she entered the culinary industry. “I didn’t really start my food career until right before my 30th birthday, which was about 19 years ago,” she says. She was freelancing in New York City, accepting any writing jobs related to food that she could get. She wrote short reviews for Time Out New York and articles for various local papers.

Then, Adeena secured a position at Gourmet magazine as a copywriter in the marketing department and stayed in the role for three years. “That's where I learned all about the publishing industry, how magazines worked, and how advertising and editorial differed and where they overlapped,” she says.

Once she had gained this significant experience, Adeena was ready to bring her career to the next level. She knew that culinary school would help her achieve this transition. “I wanted to draw a line in the sand between the marketing work I was doing and move into more creative pursuits. I felt like culinary school would be a great way to get me oriented and on track quickly toward the direction I wanted. At that point, I knew I wanted to work somewhere at the intersection of cooking and writing,” she says.

In 2005, Adeena began courses at ICE, where she was sharply focused on her goal. Her class was composed of nine students so she was able to receive plenty of personal attention from her instructors. She used her time in culinary school productively and absorbed an immense amount of information. “I learned a lot, and I continued working on the side, both to help pay for school and to continue advancing my career,” Adeena says.

She completed her externship at then-trendy Soho spot Kitty Chai, cooking Asian-fusion cuisine at the cold station. Though she had fun in the professional kitchen, Adeena knew that she didn’t want to work in a restaurant setting. “I was already considerably older and it wasn’t something that I was interested in doing, both from a career point of view and the way I wanted to structure my life and my hours,” Adeena explains. “My work was always intended to be in the home kitchen for home cooks and that was the direction that I steered my career.”

After completing her education at ICE, Adeena tried lots of jobs within the food space. She dabbled in food styling, catering and delivery private cheffing. She knew that these experiences would be useful once she determined what exactly she wanted to do. “I tried to approach everything with enthusiasm and I always asked to be paid, even if it wasn’t a lot. I always felt like if there was a transaction of money that both of us would take the work more seriously,” Adeena conveys.

After some trial and error, it became evident that recipe development was the right profession. One of Adeena’s first freelance jobs out of culinary school was developing recipes for Food Network star Ellie Krieger. The two worked together on a healthy cookbook, “The Food You Crave," and Adeena continued to develop recipes for Ellie’s subsequent books. “[Ellie] allowed me to use that work as a springboard to introduce myself to editors at health magazines like Health, Self and Women’s Health. I wrote articles and developed recipes for all those publications,” Adeena says.

Though she was working on recipe development and testing for both magazines and cookbooks, just one medium stole Adeena’s heart. “I realized that my real love and passion were cookbooks. I read cookbooks like novels,” she says. “I really was inspired by the career of Melissa Clark. I felt like every cookbook I got my hands on had this woman’s name on it, and I didn’t even know that cookbook coauthoring was a career choice. Through Melissa’s work, I sort of developed that as a goal, to work as a cookbook coauthor.”

In 2010, Adeena got an agent and began her first cookbook writing assignment soon thereafter. From there, one project spiraled into another and another. Eventually, Adeena was introduced to Chrissy Teigen by the model’s agent, after interviewing for another project a few years earlier. Adeena and Chrissy hit it off and have been working together ever since.

“I love coauthoring with other people,” Adeena reveals. “I love learning about different cultures and different recipes. Every cook has something to offer and something to learn. It’s really fun to be able to combine my love of cooking and my love of writing in such an exciting and collaborative way.”

Now, Adeena is writing for herself. “I can’t even believe my dumb luck,” she says gratefully. “I just pinch myself every day. It’s really a dream come true for me.” Nonetheless, the dream wasn’t accomplished without challenges. The adjustment from coauthoring to authoring was a stark one.

“When you work with someone else, you can really focus all of your energies and efforts on developing their voice,” Adeena says. “It’s really fun to help someone realize their vision. All of a sudden, when you have to revert to your own voice, you ask yourself if you have what it takes to put forth your own platform and ideas. When I started writing “Sababa,” it took me a little while to find my footing as an author, as opposed to a coauthor, and to have confidence that what I had to say was going to matter and resonate with people.” 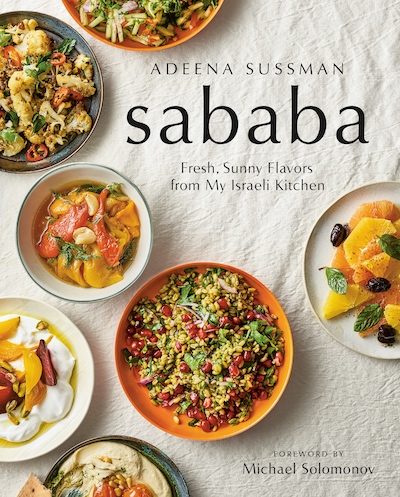 Ultimately, Adeena has moved from the supporting role to the starring role with grace. She completely owns her work and feels she has grown by doing so. Naturally, though, Adeena was nervous for publication day. “There was so much buildup to the big day that my book came out. There’s so much thinking about it and once it’s go-time, you just kind of go. You don’t worry about whether there’s a quarter of a teaspoon too much salt in one recipe. Once the book’s out, the book’s out,” she says.

Since “Sababa” has been introduced into the world, Adeena has experienced rave reviews and sold-out book tour events. She visited 20 cities around the world, from Los Angeles to Toronto to London, combining work and pleasure throughout her travels, visiting with old friends and connecting with chefs. She hosted dinners at acclaimed restaurants, talks at Jewish community centers and demos at festivals.

“I had a wonderful book launch and a book tour, which is a real luxury these days because of coronavirus,” Adeena says. “I definitely don’t take for granted the fortuitous timing of my book coming out this past fall. It was a really exciting time, and I’m still enjoying the long release of ‘Sababa’ as people continue to cook through the book while being quarantined at home.”

Though she’s staying safe in Tel Aviv, Adeena hasn’t stopped celebrating and promoting the book. She’s been teaching online cooking classes and giving lectures on Zoom to her many fans. Most importantly, Adeena is working on her next cookbook, a continuation of “Sababa” that highlights Israeli weekend cooking, to be released in Spring 2022. We’re already counting down the days.

Pursue one of the many career paths in food with ICE's diploma programs.