It was a surprise visit by one of the world’s top toques.

What would you do if one of the best chefs in the business came into your class to taste your food and give you advice?

ICE students at our New York campus experienced just that first-hand when acclaimed chef Daniel Boulud, who was named Best Restaurateur in the World in 2021, dropped in for a video shoot - and a bite to eat.

Chef Daniel came to campus to shoot a segment for TF1, one of the most popular television channels in France. Chef Daniel himself made the choice to come to ICE for the shoot so he could "highlight that the school has wonderful young chefs that end up coming to work for him," according to his publicity representative.

A post shared by Institute of Culinary Education (@iceculinary)

“I’m impressed by the commitment and the evolution of the school,” Chef Daniel said. “We [in the restaurant industry] depend so much on good education for the students.”

Culinary Arts Chef-Instructor Chris Arturo’s class really felt the heat: they had a two-Michelin-starred chef drop in to taste their dishes as they were gearing up for their final practical exam of the program.

Chef Daniel assisted Chef Chris in tasting each student’s presented dish, asking about the thought behind it and the different techniques used before offering up constructive criticism about ratios of protein sizes to their accoutrements, and color and height in dishes. 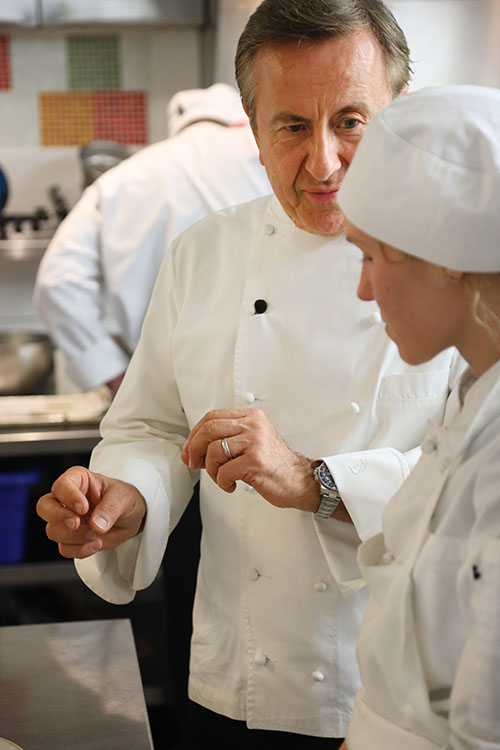 After spending over an hour touring ICE's facilities, tasting dishes, and meeting the next generation of culinary artists, Chef Daniel’s parting comments boosted the confidence of those embarking on their restaurant externships.

“It’s a gratifying thing for an executive chef or a sous chef to see you progress and to see you becoming trusted,” Chef Daniel said. "We [all] take pride in mentoring young chefs.”

Though it may have been intimidating at first, the word in the halls was that Chef Daniel's visit was an invaluable experience.