Sam Guber worked his way up the ranks to his new role at the popular Los Angeles restaurant.

Sam loved cooking from a young age. A native Angeleno and an explorer of all cuisines, he describes that some of his favorite childhood memories took place around his family’s dinner table. With an increasing interest in pursuing a career in the culinary industry, Sam enrolled at the Institute of Culinary Education in 2019 to fulfill a lifelong dream.

"My parents were very busy when I was growing up. They worked a lot but always made time for dinner," Sam explains. "I never really connected it myself at first, but then I realized much later on that food really brought people together." Though he initially didn’t start his path in the culinary industry, he was always drawn by tasks that involved his creativity and handiwork.

"I always excelled in classes that involved using hands, like woodworking or robotics, where I really liked to build and make things and have something come together," Sam says. He also always loved being in the kitchen as a kid and grew up baking. "I like the sweets," he admits. "That gave me a good understanding of the fundamentals of what cooking takes and how it builds from there. Once you get the ideas and the exact amounts that comprise something, then you can start experimenting."

Though his love for baking prevailed during his childhood years, Sam started enjoying cooking savory elements as he grew older. "In college, it was the first time I was really cooking for myself, and I realized that I could make something delicious. I started cooking for some friends. It was a great way to bring people together, and it brought me back to my childhood memories," he says.

While studying creative writing at the University of Colorado, Sam spent a good portion of his time barbecuing and grilling for his close friends, secretly longing for cooking to become more than a pastime. "My father is a writer as well; he always shared the importance of telling a story," Sam explains.

"When I graduated college, it was definitely that time when I was thinking, what do I want to do with my life? I worked some different jobs," Sam shares. "I kind of saw myself being able to choose that now’s the time: If I want to spend the next six months to a year doing something, let me pursue my passion for a while; if it doesn’t work out, then it doesn’t work out."

Sam decided to see if he had what it took to work in a professional kitchen. "There was a Japanese restaurant opening up called Osaka’s that served things like okonomiyaki pancakes and yakiniku. It was really interesting Japanese food that wasn’t very prevalent in the area but delicious and all along the lines of what Americans like to eat," he shares. Before he knew it, Sam’s six-month trial period of working in a restaurant turned into a year, as he quickly realized he had a true knack for the job.

"I had a passion for it, and there was room for growth and advancement at the restaurant," he says. However, at that point he decided to relocate back to his hometown. In L.A., he knew he could likely land a job somewhere, but he wanted to explore fine-dining establishments and a faster-paced restaurant, which he was not yet prepared to do on his own. 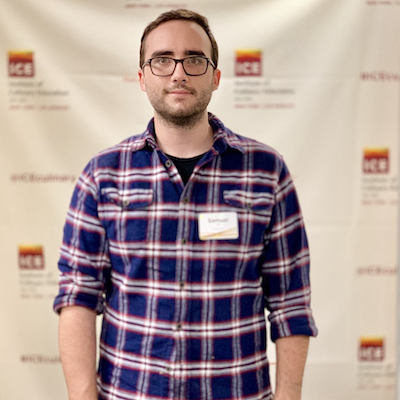 "I chose to go to culinary school because I just wanted to have an idea of what I was really getting into," Sam says. He wanted to develop a stronger foundation as he stepped into the competitive cooking scene in L.A., so he studied Culinary Arts at ICE.

Sam completed his culinary externship at Jon & Vinny’s, an Italian restaurant recognized with a Bib Gourmand designation in Michelin Guide California from chefs Jon Shook and Vinny Dotolo, the owners of several popular Los Angeles concepts like Animal and Son of a Gun. Sam accepted a full-time line cook role at the restaurant's Brentwood location, where he quickly progressed through the garde manger, grill and pasta stations. While on the line, he recalled some of the fundamental lessons that he learned during culinary school, like the importance of gathering your mise en place, prepping your station and kitchen cleaning standards.

After a few years working through the different stations at the restaurant, Sam received a promotion and became the newest sous chef at the restaurant's Fairfax location. "Being a line cook gives you a full understanding of what every station does and what the line needs, which is very important when becoming a sous chef," he says. "One of the sous’ job is to make sure that the line runs smoothly, that everyone’s prepared; you’re the fallback and the last line of defense.

"At the same time, it’s a very difficult and big challenge — a great challenge. This is my first time in a management experience role and my first sous chef job," Sam explains. "I still have a lot to learn, and luckily I have an amazing support staff there, people that are very experienced and know the job well," to coach with him along the way.

As Sam grows in his new position, he hopes to encourage his peers with his attention to detail and superior work ethic. "There’s never too much getting prepared for a night," he says. As a sous chef, he wants to "lead by example. If you work hard, they will work harder. People want to see you sweat just as much as they are. It’s a tough job, and motivating others is something I’m still new at and still learning to do the best way."

In the future, Sam hopes to open his own restaurant. "I’m currently in the stage of building ideas and concepts. The most important thing is the food. It’s gotta be right and unique. It’s hard to create something that’s truly unique and individual," he says. "That’s what’s so interesting about the world of food; what you want your restaurant to be is truly endless. That’s the fun part!"

Pursue your path to a professional kitchen with career training at ICE.