Claudia Fleming’s winding food road, from over-the-top pastries in the '80s and '90s to writing her second cookbook in a Long Island cottage, has landed her back where it all began with Union Square Hospitality Group (USHG) as executive pastry director.

She first started working in kitchens while pursuing a career in dance, but at age 29 decided to fully commit to cooking and enroll at the Institute of Culinary Education, then called Peter Kump’s New York Cooking School (Claudia and her classmates called the school PKU: Peter Kump University). Back then it was in a two-kitchen brownstone on East 92nd Street. “I remember being over-the-moon enthusiastic about going to school every day,” she says. “It was a happy time for me. Just learning and absorbing all that new information was very exciting.”

Claudia started on the savory side of the menu — and at some high-profile New York restaurants. In 1984 she was working at Jams, Jonathan Waxman’s restaurant that brought California cuisine to the East Coast. Then she had a stage at Drew Nieporent’s Montrachet and, while attending ICE, worked at Union Square Cafe, her entry into Danny Meyer’s restaurant group.

One summer she needed a break, so she went to Aspen, Colorado for some time off. When she came back to Union Square Cafe, then-chef Michael Romano said the only spot available was assisting the pastry chef. Claudia wouldn’t pass up an opportunity to learn something new.

“I did that and then I just never looked back. It was a great experience for me working right next to the pastry chef. Just the two of us together is a rare experience,” she says.

Now Claudia’s come full circle at Union Square Hospitality, except this time she’s leading pastry development for the entire restaurant group. She rotates between restaurants, dedicating time in each kitchen. Right now she’s at soon-to-open Ci Siamo, an Italian restaurant with a wood-fired hearth oven where Claudia is working on something she hasn’t done before: Italian desserts. 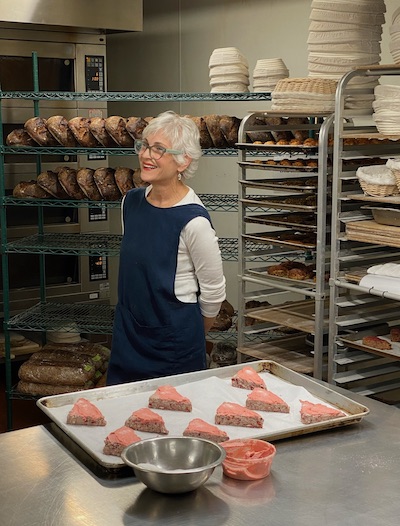 “While I'm not literally cooking in the hearth, I'm smoking nuts to garnish a dessert with, and I will probably roast some fruit that will go with desserts,” Claudia says, thinking of what she’ll include on the menu. “It's another element to be able to play with, to be able to put into my toolbox, so that's fun.”

Claudia says her cooking style skews more toward simple, comforting dishes through which the ingredients get to shine. That’s in stark contrast to her early days of pastry in the '80s and '90s when staffed-up restaurants were throwing multiple sets of hands into desserts, building tall edible structures showered in gold leaf. Claudia remembers a high-end New York restaurant scene enamored by fantastical desserts, investing in people and equipment to make them happen, which was “super cool and moved the industry forward but not sustainable.”

Now she says pastry departments are generally smaller and desserts are often less intricate. Those smaller kitchens, plus the rise of home bakers starting their own small businesses over the last 18 months, have made pastry programs all the more important, Claudia says.

“If you're going to work in a smaller company or for yourself, then culinary school is a necessity,” she says. “It's very hard to create in a vacuum. Working at home by yourself is so challenging. If that's how you choose to go, then I would say cooking school is a must.”

Claudia experienced some of that struggle while working on her second cookbook. After selling her acclaimed restaurant and inn, North Fork Table, in January of 2020, she remembers writing it while holed up in her Long Island kitchen cottage. Finished with her book and back in New York City, she says she’s happy to be focused again on making desserts.

And when the ICE alum isn’t writing, she’s often reading. Claudia says aspiring chefs should do the same, pushing students to know their food history.

“Know who Maida Heatter is. Know who Jacque Torres is. Know who Francois Payard is. Read 'Larousse [Patisserie and Baking]',” Claudia says. “Just read, and read about technique. Know the history of the craft. It's important to know where these things come from, and it's very inspirational, too.”

Overall, she hopes future pastry chefs will “read more and look at pictures less” because something can look great on a screen but not taste great on the plate. “It's really about what it tastes like,” she says.

Pursue a career in Pastry & Baking Arts at ICE.