“I decided to do this preparation today because no one does it,” Chef Paul Liebrandt explains as he presents the unfamiliar, dark red and black carcass of a wild Scottish hare to students. “When you taste this hare, you will understand — there’s no going back. It’s very strong.”

Lièvre à La Royale, or hare royal, dates back to the 1600s in France and was worthy of royalty by 1775, when Parisian Chef Antoine Carême made the recipe infamous. The disc of braised wild hare stuffed with foie gras and pork topped with blood-wine sauce has the mad-scientist feel that Chef Paul channeled when he disrupted New York’s food scene early on in his 27-year career.

Indeed, no student in the room has tried the historic dish when Chef Paul presents it at his November iteration of our Elite Chef Series. He reviews each part of the hare with the audience, noting that the liver, kidneys and heart have always been used out of respect for the animal.

Chef Paul marinates the bones and legs, and brines the loin, which has the most flavor from muscle and fat. He cooks the hare sous vide rather than the traditional braising to get the natural taste of the meat with a modern approach. 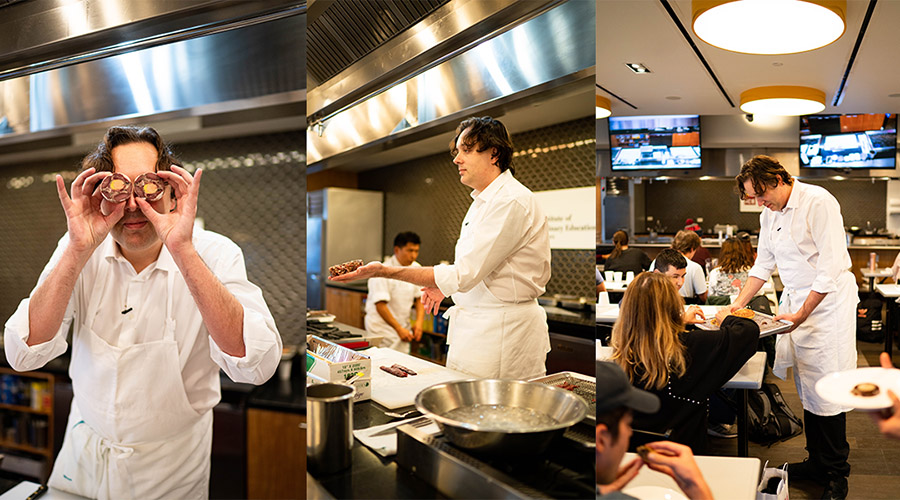 His acquired skills come into play for the farce (stuffing of pork butt, brioche, garlic confit and thyme) with which Chef Paul emphasizes the precision that goes into proper mixing and rolling. “We have a lot of ingredients and a lot of techniques, but for certain things you can only learn by working in a kitchen from someone who learned and passes it down,” he explains. “It takes years and years to build muscle memory. You can’t just butcher a hare, you have to learn where to cut, the proper temperature, how to mix. The amount of pressure when you roll the ballotine — you have to do 1,000 times to learn.”

As he encases the loin, farce in crépinette (or caul fat, the membrane from an animal’s organs), mesmerizing attendees with the all-but-forgotten technique, Chef Paul is as thoughtful as he is methodical, relaying the reasoning for each step in the recipe: Natural and wild ingredients are best; thyme is used because it grows in the Scottish Highlands and hares nest in it; the Maldon sea salt comes from the U.K.; the outside of cinnamon trees is preferable to the core because of its distinct aroma; Activa binds the hare and farce.

He instills practical tips for fundamental cooking: Keep everything ice cold when working with fats; beware of vacuum sealing pulling your fillings out of place; always test temperature and seasoning as you go. And as he advises that the chef’s duty is to give diners a memory, “something they can think about at night,” he imparts unforgettable guidance to the next generation of chefs:

After nearly three hours of careful preparation and plating, the entire room experiences the aggressive flavor that Chef Paul described: rich meat, black truffle, and wine, port and chocolate sauce thickened with blood, but there’s a delicacy and balance from the intentionality of his preparation. The taste is as strong as was promised, but it’s pleasing and purposeful, and we are bound to remember it beyond tonight.

“There’s a story behind the dish: It’s meaningful. It’s not just game on a plate,” Chef Paul emphasizes. “This dish dates back hundreds and hundreds of years, and you’ve never seen it. I’m passing it on and hopefully you will one day.”