During his eight-year tenure as Executive Pastry Chef for Le Bernardin, ICE Creative Director Michael Laiskonis was often praised for his innovative desserts. Yet, while he was given a good deal of creative freedom in that role, there were still significant restraints on his dishes. First and foremost, they had to make sense in the context of the Le Bernardin’s fine dining menu, and there was always the essential question of food costs. 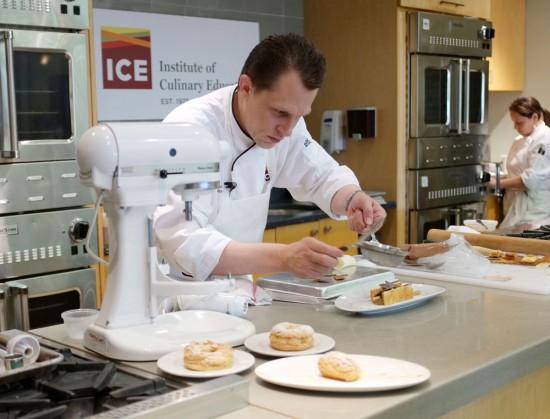 Since joining ICE’s team in 2012, Chef Michael has had the opportunity to push his creative boundaries, with both sweet and savory dishes. From working with the IBM Watson team on the cognitive cooking project to exploring the regional dishes of his Latvian ancestors, it’s clear that he has been hard at work. This fall, Michael took a moment to reflect and share both the results and the lessons of his new discoveries with ICE students and alumni. Learning to think creatively is one of the primary goals of any aspiring chef.

However, Chef Michael insisted, before one begins innovating in the kitchen, he or she not only needs to practice many classic recipes, but also should understand the underlying science of culinary techniques. For example, you may have the brilliant idea to add a fruit purée to your crêpe batter, but without the knowledge of how that will affect the moisture content, cooking time and overall sweetness, you risk meeting more failure than success. Dreaming up the perfect dish is one thing, but having the know-how to execute it is what truly separates chefs from cooks. Which is why Michael regularly applies scientific principles to his day-to-day work. For example, consider that there are about a dozen sweeteners commonly used in the professional kitchen.

How might a chef begin to select the best sweetener for, say,  an experimental ice cream flavor? Michael suggests that you could look at the water content of each, as water content greatly affects the freezing point and the crystal formation during churning. A chef should also consider the sweetening power of each ingredient and how each sweetener interacts with heat and cooking.

But before he applies such scientific ideas, Michael first needs to come up with the idea for each new dish. In certain cases the inspiration—as with Michael’s carrot pistachio caramel—arrived in the form of a dilemma: how might he create a sugar-free caramel that was appropriate for diabetics or less harmful to dental health? As for Michael’s Rupjmaizes Kartojums, his idea was to create a play on flavors he encountered during a visit to distant relatives in Latvia, a country where desserts are commonly made with dense black rye flour. On other occasions, it’s the innovative ideas of his colleagues in the field that spark Michael’s imagination. Where, for example, did he get the idea for his cylindrical tart croustade with praline cream? The idea came from a photograph of a crisp geometric pastry shell created by another chef in a magazine. Having no recipe to reference, Michael reverse engineered the shell, taking into account all the issues that a classic pastry dough might have in keeping such a delicate shape.

Believing that the journey is more important than the destination, Chef Michael’s presentation focused on the lessons he learned over the course of creating each dessert. Most notably, it was apparent that the end result is rarely the same as the initial concept of a dish. However, the joy of experimenting is that once in a while, the revision of your initial idea ends up far surpassing even your most creative expectations.

Want to study with Chef Michael? Click here for a list of his upcoming workshops at ICE.