ICE Students Volunteer with Wolfgang Puck at the Oscars

Students worked with Chef Wolfgang Puck at the Oscars

On Sunday evening, Hollywood’s biggest stars gathered for the 92nd Academy Awards ceremony. After the award for Best Picture was announced, celebrities made their way to the Governor’s Ball, the Academy of Motion Picture Arts and Sciences’ official post-Oscars party. For the 26th consecutive year, legendary chef Wolfgang Puck and the Wolfgang Puck Catering team prepared the celebratory menu — with help from Institute of Culinary Education students for the first time.

More than 20 ICE students from our Los Angeles campus assisted the chefs for the occasion, preparing the intricate, plant-forward menu for this year’s bash at the Ray Dolby Ballroom. “I’ve worked the Oscars red carpet as a publicist, but I never got to see behind-the-scenes, where I get to be a part the experience,” said Culinary Arts student Tracy Cahill. “When we took the shuttle down Hollywood boulevard and then got up to the kitchen, the first thing we saw was Wolfgang Puck, and I think all of our jaws dropped.” 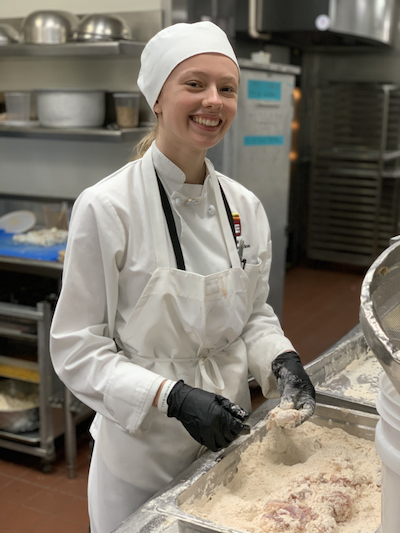 Upon arrival, students were divided for varying assignments for the first few hours of prep. After tasks like chopping cherries, de-stemming arugula and prepping cilantro for guacamole, students moved to kitchens to work on plating amuse-bouche and passed hors d’oeurvres, including puffed air bread; avocado tostadas with crunchy cabbage and chipotle glaze; mini taro root tacos with braised hibiscus; and tomatillo salsa, and cucumber rolls with green chickpeas, avocado and citrus confit. “We had puffed up wonton wrappers, like pillows, which we filled with whipped aquafaba and folded in hummus,” Tracy explained. “It was super airy, almost like the consistency and texture of light, whipped cream.”

This year, the Governor’s Ball menu was 70% plant-based and 30% vegetarian, fish or meat. Only seafood from the Monterey Bay Aquarium Seafood Watch recommendations list was sourced. “The timing couldn’t have been better for me being in the Health-Supportive Culinary Arts program as the menu this year was 70% vegan,” said student Sandy Surrett.

Sandy worked four stations: first filling piping bags with guacamole with Chef Paul, next prepping remote carts for pre-award show appetizers and transferring agrodolce shallots to containers for Chef Chloe. Then it was on to working with fellow Health-Supportive Culinary Arts student Caitlyn on preparing cucumber rolls with green chickpeas and citrus confit for the amuse-bouche. Lastly, during the Governor’s Ball service, Sandy worked on the line preparing a vegan mushroom bolognese.

A little peak at a just a few items served at the Governors Ball last night. I was able to help out with the Wolfgang Puck catering team preparing food for approx. 1500 guests attending the Oscars. A primarily plant-based menu with some killer duck tacos and Wolf style burgers to satisfy those who still enjoy delicious meat. #oscars2020 #wolfgangpuckcatering #wolfgangpuck #governorsball #pinchmeimdreaming #iceculinary

Students worked with a number of chefs from all around the Wolfgang Puck organization and the world. “Overall, it felt like it was a teaching community and they were very inclusive of us,” Sandy said. “I worked with several amazing chefs, namely Chef Chloe and Chef Paul. These two provided such an incredible learning environment and positive feedback. It made me love being a part of this effort and gave me such inspiration.” Other students echoed Sandy’s sentiments. “Chef Chloe was so kind, patient and calm, and her creative and completely vegan appetizer menu was amazing,” said Culinary Arts student Amy Baer. “Chef Eric was inspiring with his dedication to hospitality and instructions he gave to the servers.”

Though it was a long and intense day, students felt prepared for the day’s demands. “I am proud of my performance due to what I’ve learned at ICE,” Amy said. “Everything from kitchen etiquette to speed to familiarity of ingredients.“

“In the few hours I was there I learned an incredible amount,” Sandy said. “Experiencing the pace, organization and preparation of how the food was executed was amazing.” Amy adds. “It was an amazing, unforgettable, educational and inspiring experience all around.”

It didn’t hurt that a few celebrities made appearances as well. “Shaking Wolfgang Puck’s hand was a thrill, being within four feet of Joaquin Phoenix and Rooney Mara was another," Sandy said. “I feel very honored to have had the chance to see how the Wolfgang Puck team successfully produced such extraordinary food for 1,500. I’m not sure this culinary experience can be topped!”