Marcus Samuelsson on His Most Important Work Ever

The Red Rooster chef and restaurateur reflects on his culinary career, community, culture and impact.

"I miss my community, I miss the guests. I miss creating food. I miss the cooks. I miss arguing back and forth with chefs, like 'how are we going to do this next dish?' 'What’s going to be on the menu for spring?' All of that: what it means to be part of the hospitality community. The giving part, the way Red Rooster’s built between music, food, menus, storytelling. I just miss it."

The chef of 12 restaurants around the world, author of seven books, star of "No Passport Required," and judge on "Chopped" began cooking with his grandmother after school in Sweden before traveling and cooking in Japan, Switzerland and France between ages 18 and 21. "That really transformed my life," he said. "This was a field that I could be part of. I didn’t exactly know where or how or what. Food and the making of food was something that I was deeply connected to."

Marcus studied at the Culinary Institute in Gothenburg and began his career at Victoria-Jungfrau in Interlaken, Switzerland, working in the garden and then all the stations with a French and German-speaking kitchen, before sharpening his skills in France.

"A chef told me that I had to lower my ambitions because I wanted to own a place one day. He said there is no black chef in the world that has the ambition that you have. You can work in a restaurant kitchen but you can’t own one," Marcus relayed. "I didn’t know how to take that, it’s obviously very, very disappointing and challenging as a kid, but my parents were the ones who said, 'You should go to America. You should go to New York.' So the experience of diversity that America is still working through was better here at that time than anywhere else. Those experiences wouldn’t have happened unless I would have been born in Africa, unless I would have been an immigrant. For any student now, you may go through obstacles now whether it be financial or language-wise, whatever, but once you overcome that it can also be one of the things that is very much yours and it can be something that you can add on to."

Of course, he did, after making a name for himself at Aquavit in Manhattan. "Through 9/11, I cooked in Midtown at a very high-end restaurant, but I was looking for a home. Not so much as a restaurant but a community, I didn’t know my neighbors and I wasn’t engaged in Midtown. It was a great place for clients but not necessarily for me to live. I decided to move to Harlem," he explained. 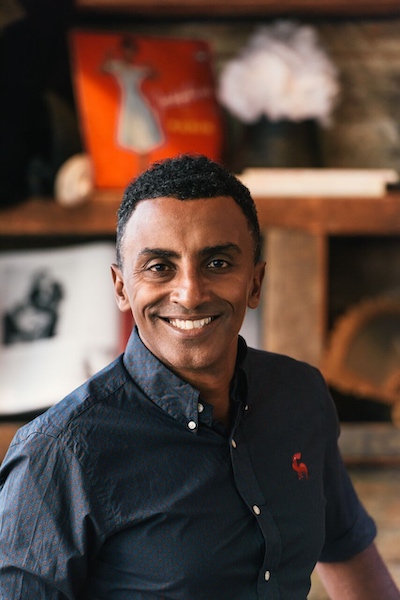 "Red Rooster is a reflection of many years of searching. I met amazing people here and the community guided me and really informed me of what Harlem was in terms of culture. And then I started to see cooking on a different level: The food was in the parks. Great food was at an after-church program, not so much from high-end restaurants. That all informed me to open Red Rooster in 2010, creating a space that was in the community built of the community. Ever since that, 180 of us have been working on it, and we have 70 musicians on top of that. It’s a very layered experience, and we can’t wait to come back fully to the Red Rooster as people know us."

That's because the restaurant converted to a community kitchen in partnership with World Central Kitchen (WCK) in early March, thanks to its connections. "What does it mean to be a chef? It means to engage people, whether it’s purveyors, whether it’s staff, whether it’s the customer base. You’ve gotta create a place that’s of desire, that’s sticky and delicious. I’m lucky enough to know dishwashers, cooks, servers, but also a lot of wealthy people. And I know Jose Andres," Marcus said of the WCK founder and fellow humanitarian chef. "We were up within a week in Harlem and then in Newark. Together we have great partners in Newark, like Audible. The CEO asked how they could help out and raised over $1 million so restaurants in Newark could come back. As a chef, it’s about looking through your contacts and figuring out how to get the infrastructure of hospitality back. Us serving 42,000 meals gets cooks back to work. The farmers now have an infrastructure to send to us so we can get back to work as soon as we can."

His teams here and in Miami are preparing and distributing thousands of meals a week for takeout and delivery. "The regulars now might be a blend between first responders, people who lost their jobs, some are homeless, all of them are in deep need of Red Rooster being open," Marcus said. "We’re probably doing the most important work that we’ve ever done. I couldn’t do it without this incredible staff. It’s not an easy environment for the hospitality industry at all, but I admire — the heroes for me have been — my staff right now."

As for getting involved, Marcus advised students: "You can help out, volunteering and engaging. It’s not always about needing a check. You can help with anything from technology skills to marketing skills. Just being a young person, there are so many different ways you can help out. Reach out to that local cafe that’s struggling to stay open, say, 'Hey I have a couple of hours a day, how can I assist you?' Being home does not mean that you don’t have work ethic or that you don’t have a skill set to offer."

He advocates culinary school for structure and is optimistic about the next generation of chefs. "Going to a very designed program like at ICE, I think it’s a great choice because it’s in a very urban, active area like New York City so you have access to your internship at great restaurants and you can volunteer on weekends. A quick, smart, targeted program is ideal because there are some things in school that you can just learn about in school. And it’s a very unique moment: When you’re in school you’re with other students that you can share ideas with. Once you’re out in the open market, your hours matter. You’re costing someone money. So that open book is not going to be the same."

Marcus remarked that the restaurants that opened in New York after 9/11 had a new way of connecting with clients, and he expects a new wave. "It’s not a bad time to be in school to learn the traditional skill set and come out at this pivotal moment. How exciting for a student to come out in the birth of that."

The globally influenced chef recommends learning through travel, too. "As a chef, you are inspired by where you go, how you live your life and where you come from," he said. "I’ve been lucky enough to cook from Australia to Brazil to London, Sweden, America, Asia, Southeast Asia. Travel has changed me, formed me and transformed me. Any young cook that wants to get in the field, when things go back to normal, travel. Traveling online is one experience, but nothing beats do. I remember the first day when I was a teenager and I walked into that kitchen in Japan. That is different than just seeing it online: It smells different, the way you communicate is different, the way you understand umami is different. There’s a real experience. The way you connect with your eyes when you don’t speak the same language. You learn so much."

More recently, Marcus traveled around America for the first two seasons of his PBS show, "No Passport Required." On taking time away from his dozen restaurants to film, he said "storytelling in food is very important. Being an immigrant, being somebody who can relate to these various cultures’ challenging times right now. When you’ve been fortunate enough to do something that you love so much, you should share those stories."

When asked how he has time to cook among all his professional endeavors (which include virtual cooking classes for his son's school during the shutdown), Marcus explained, "cooking is a creative muscle for me that needs to be stimulated and activated. I love working with my cooks because they kick my butt if I don’t stay on top of it. It’s like sports, you have to have somebody to practice with that is hungry that pushes you. I have a very exciting team that is ambitious and diverse and enjoys the industry. To me, people that work in hospitality are the best people in the world. It’s a very difficult time right now, but we’re going to get through this, and I can’t wait to do it with the people that I worked with before."

When viewers expressed their ambitions to work for Marcus one day, we asked what he looks for when hiring: "Desire and passion around food," he emphasized. "Everything else you can teach. You can teach pure cooking skills, you can teach how to do something. There are going to be times when you question the why on cooking, and you’ve gotta have a deep love for food, people, process and craftsmanship. Be curious about craftmanship."

Marcus' desire, passion and curiosity have led him from 10 years of success with what's become a Harlem landmark to concepts in London, Montreal and the Caribbean, a food festival celebrating his community, and the opportunity to fight food insecurity in three cities.

"I feel blessed to have been in cooking for such a long time. I’m more curious about food today than when I started. Anyone who can have a job for over 25 years and be more excited, that means that you’re in a good field. Even in this tough, challenging, super difficult time. And there are some great things that are coming out of this. The Independent Restaurant Coalition (IRC) came out of this. I wish that we would have thought of that earlier, but I see more work together and teamwork today than I’ve seen at any other time. Maybe after 9/11 it was similar. The word restaurant means to restore your community, and never has that been more important than now."

Find more inspiration from our Instagram Live guests and pursue a future in that good field with ICE's career programs.