In the first five minutes of my culinary externship, I was asked to shuck oysters. (We’re talking oysters on the half-shell that would be whisked from my newly occupied station to a table in the dining room.)

Was I prepared for this? Theoretically, yes. Emotionally, less so.

While I of course expected to be put to work right away during my externship, and had shucked oysters several times in my culinary curriculum at ICE, it was nonetheless an intimidating moment when faced with the knowledge that someone in an elegant restaurant was about to consume something I had prepared, even if no actual cooking was involved. At $4 to $5 each, I had to be quick — and they had to be beautiful.

Oysters, like cheese, charcuterie and other cold preparations, are an easy, value-added menu item for restaurant owners and chefs. They’re a great way to boost revenue, with the only labor cost being the time it takes to shuck them (with an even greater profit margin if an intern is doing the shucking) plus whatever time and ingredients are perhaps required for a house-made mignonette or cocktail sauce. (More later on the relative merit of such condiments.) They are also considered one of the most sustainable forms of animal protein, thanks to the success of responsible, modern aquaculture practices.

Really understanding oysters can be a lifelong pursuit, but a worthy one for any chef with restaurant aspirations.

You're not selling your food, you're selling a story.

“The most important thing for anyone is knowledge,” says Chef Patrick McMurray, world champion oyster shucker, author of “Consider the Oyster: A Shucker’s Field Guide,” educator and occasional ICE masterclass instructor. “Because, as a chef, you're not selling your food, you're selling a story.”

With his own lifelong pursuit of the story of oysters, Chef Patrick “Shucker Paddy” shares his knowledge, and discusses several key points to help expedite a deeper understanding of this versatile culinary product.

While terroir is the idea that certain foods and beverages are influenced by their sense of place, and all of the factors that influence the earth on which they are raised, the same holds true for aquatic foods, for which we have the term “merroir.” (Where “terre” means earth, “mer” means sea.)

“Various regions [where oysters are cultivated] have seasonality, and the oyster changes within that year,” says Chef Patrick. “Oysters change with salinity drops or increases,” he explains, which can be impacted by simple meteorological factors such as rain. “So your oysters can subtly change flavor-wise, on a day-to-day, or week-to-week or even order-to-order basis.”

This level of understanding of the nuances of the particular oysters you are serving is equally as important as the technique of shucking them and presenting them well.

“A very good oyster shucker should be able to explain to a client what they're going to experience, just like a sommelier would with wine,” he says.

As oysters come with a variety of textures and flavors that express their unique merroir, Chef Patrick often discourages the use of popular oyster condiments, at least initially.

“Try the first one with nothing on it to get that base flavor,” he says. “Slide it in, two-bite chew and aerate as well because the olfactory and the palate work together. You get more out of it because you get those subtle flavors that you won't if it's covered in ketchup and horseradish and hot sauce and all that.”

For that matter, he also mentioned that the fewer the condiments the higher the profit margin, which is an important consideration when developing an oyster program.

“The less you do with the oyster, the more you're gonna get out as a restaurateur," Chef Patrick says. "Your actual best price point is when there's nothing on it.”

Tips From a Restaurateur: How To Run Your Business > 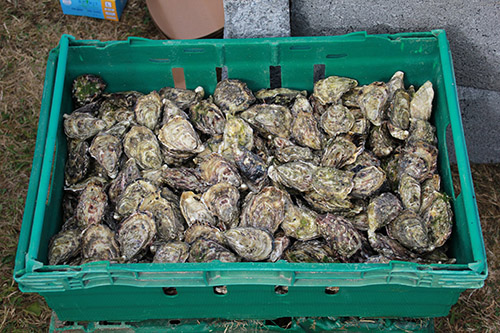 Understanding the specific flavors and textures of the particular oysters you are serving is key, especially if the selection or selections change from day to day, however Chef Patrick admits that one question will likely come up over and over again, and as a restauranteur or chef, it’s good to prepare yourself and your servers for the inevitable: what’s the difference between West Coast and East Coast oysters?

“I got really good at explaining this because you never have a lot of time,” he says. “So to that question I go, ‘East Coast oyster: salty-sweet, West Coast oyster: ocean sea salt, sweet cream, melon, cucumber.’ That's the difference.”

“Like any good chef, you play to the seasons,” says Chef Patrick. “Same thing with the oyster. There are certain times a year where you're going to see certain oysters.”

Historically, there’s an idea of a fixed “oyster season” that begins around the same time as the Northern Hemisphere autumn, and perhaps you’ve heard the adage about consuming oysters only in those months that contain an “R,” as in September through April. However, “it’s evolved over the years,” according to Chef Patrick.

As he explains, the idea of all oysters only being in season during certain months goes back to the 1500s in Europe, when there was a move to maintain the local oyster stock by not disrupting their natural reproduction cycle. This is less of a concern now because of modern aquaculture practices, and so while various oyster festivals do tend to occur in accordance with this old calendar idea, in contemporary practice oyster season is year-round, depending on variety.

“We think of it now as a water temperature issue,” says Chef Patrick. “It does fit true to some oysters, but we can still get great oysters all year long.”

For real oyster aficionados, on the half shell will always be the best way to appreciate their subtleties, but of course oysters are capable of fitting into any menu category.

We’d previously covered oysters as one of the surprising things you can grill, and there are many classic dishes featuring oysters such as Oysters Rockefeller and fried oysters (on their own or in a New Orleans po’ boy sandwich.)

Chef Patrick also recommends avoiding food waste by saving oysters that were not beautifully shucked (which should never be served raw) for future preparations: “Save that oyster, put it in a little jar in the fridge in your shucking station. After your service, put it in the freezer and keep topping it up until you’ve got five or six liters, then make a chowder, cook with it, fry with it, whatever.”

“They're so good just on their own, but that being said, watching people on Instagram from around the globe doing things with oysters, I'm totally inspired,” says Chef Patrick. “There’s so much you can do with it: poaching in chili crisp, turf-smoked oysters; I do classic American oyster stuffing and stuff a lobster on the half shell, steak and oyster tartare with mid to late summer Pacific oysters, curing salmon belly in oyster liquor…” and the list goes on.

As someone with first hand, oyster shucking PTSD, I asked Chef Patrick for any shucking tips to take with me.

“Work on your knife program,” he says, “because quite honestly, most oyster knives out of the box need to be sharpened. You need to sharpen up the point so it's just right; not too sharp, but letter-opener sharp, just enough so it scrapes across easily and then focus on the technique.”