Chef Natsume is a classically trained pianist and music composer. She inherited her family's love of food growing up and pursued a career in music before she got burnt out and disillusioned, and the idea of a career change clicked.

"There are lots of chefs and wonderful cooks in my family," she says. "In Okinawa, Japan, making desserts with a grandmother is a big thing and I was probably eating mochi before I could walk."

She followed this interest to the former French Culinary Institute (FCI) in New York, where she met ICE's Director of Pastry Research and Development Jurgen David, who was teaching there at the time. 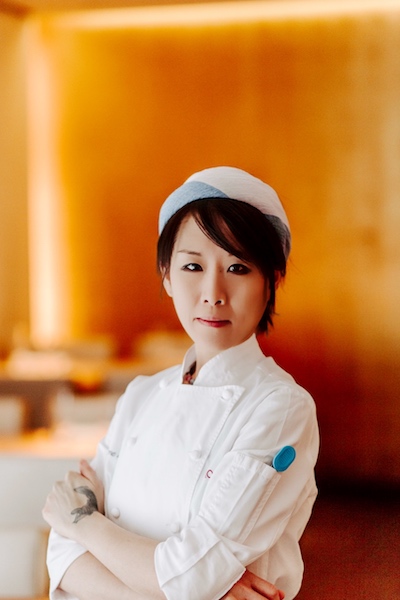 Chef Natsume gained front-of-house experience first, with positions as a server and floor manager during the days and attending pastry school at night. Then she staged at Mandarin Oriental in Hong Kong, decorated cakes at Gobo in Brooklyn and kicked off her back-of-house career as a line cook at Nobu 57, followed by Takahachi Bakery.

"Even before going into pastry school, I already knew I wanted to do Asian desserts, flavors that I’m very passionate about," Chef Natsume explained. "But obviously at FCI you're trained in French technique."

At Spice Market, she found a balance between the two with Chef Jean-Georges Vongerichten. "Jean-Georges' restaurants were the perfect combination of Asian flavors and French technique. That gave me a good background to jump off of to make plated desserts that are really balanced and composed of both disciplines."

She went with the restaurateur to Shanghai to open Mercato by Jean-Georges as the head pastry chef and stayed after three years to help an investor open a patisserie and cafe as both the food and beverage director and executive pastry chef. Then Chef Natsume needed a bit of time away from daily kitchen operation to refocus her goals.

She returned to Japan to study artisan baking at Le Cordon Bleu, Tokyo. "It was time for me to learn more instead of work," Chef Natsume reflects. "I delved into bread, which was a different discipline completely. You have less control with bread after the dough. The dough has a mind of its own. It doesn’t listen to you, you listen to the dough — you have to give up that control. Pastry chefs are all control freaks, I’m a control freak and I’m proud of it. When you bake bread, you have to be more adaptable to the weather and moisture content of the day — but the end product is more forgiving."

While Chef Natsume says her fourth foray studying an art was wonderful, the opportunity of her lifetime awaited. "Morimoto came calling and I came back to New York."

The chef's namesake concept from Starr Restaurants had established itself throughout 12 years in Chelsea, and Chef Natsume joined for the final three.

"I wanted the menu to resemble one that you would find in a fine-dining Japanese restaurant: very heavy Japanese flavors, ingredients that not all diners may be familiar with." That included a variety of ice creams and plated desserts rotating seasonally and featuring Japanese flavors like matcha and yuzu.

"Chef Morimoto gave me so much freedom that my identity formed when I was with him, so I’m very grateful," Chef Natsume says.

"That kitchen was very personal for me. I met some of my best chef friends there," she adds among her favorite memories of the restaurant. "The atmosphere was a little bit more competitive at the other restaurants. I’m very close to the savory side, I love savory also, and we had a good understanding of each other.

Morimoto closed in 2020 at the end of its 15-year lease, and Chef Natsume was among the final four team members shutting the 300-seat restaurant down. "We knew we weren't renewing, but COVID-19 hastened everything by about two months. We were hoping for a grand finale and to go out with a bang but none of that happened."

Chef Natsume said the realization that restaurants wouldn't be reopening was sobering and sad, but it was the best opportunity to search for something new.

"When we as chefs find our identities, when we’re in the environment where we have the best we can give, we’re very nurturing and like to teach," she adds. "In high-volume restaurants like that, people come in and out a lot, but I'm very proud that my station retained its original staff from the day I started to the day I left."

Going through consulting gigs with products, Chef Natsume "missed having cooks that want to learn new things that they’re not familiar with." Wondering if she'd find that curiosity in culinary schools, she reached out to former FCI instructors and inquired if they could see her pivoting to education.

"All chefs are teachers so this came very naturally," she says, adding that she taught music at the high school level before her culinary career. "It was a different kind of teaching but still teaching nonetheless. It comes back fairly easily." 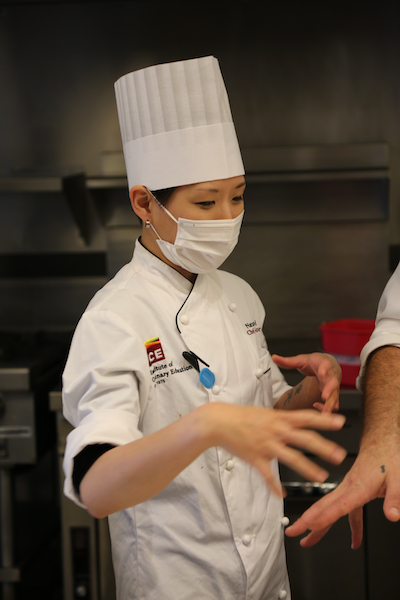 When Chef Natsume saw Chef Jurgen on campus at ICE, she knew it was a sign. Now she's trailed with him and other Pastry & Baking Arts instructors through each of the five modules, observing that the curriculum is more varied than the French and Japanese training she had, with localized techniques like American-style cakes.

"Module by module, I feel more incorporated into it," she says of ICE's program. "Now we’re doing a Mod 1, starting with a brand new group of students. They choose which way they’ll go, but you mold them and start them off how you’d want them to start."

Still consulting with a confectionery company and developing recipes, Chef Natsume says her hope is that she teaches each student one thing that they can use in their career — and she might impart her expertise with Japanese ingredients when teaching plated desserts. "I know not all of them are going to make marzipan fruit or six-tier wedding cakes professionally," she says. "I would like to be able to give away at least one statement or one piece of advice that each student can use at some point in their lives. It doesn't have to be a technique it just has to make their lives a little bit better or a little easier."

As for her career advice, after a decade of pastry success: "Be open to everything that you learn," she says. "Don't walk in here thinking you’re going to do it a certain way or only care about one topic. You will use everything you learn here at some point and you will be thankful for it."

Study with Chef Natsume in Pastry & Baking Arts at ICE.