One fateful talk show led Everton Tulloch on a new journey. Here's where the scholarship recipient is now.

An impactful interaction with talk show host Steve Harvey led ICE alum Everton Tulloch (Culinary, ’19) to pursue his passion for food, resulting in a fresh take on life and a new career path.

Four months after getting laid off and in a slump, the normally jovial Everton Tulloch was struggling to crack a smile. Wanting to end her husband’s sulking around the house, Everton’s wife suggested “doing something different” for the day. Little did he know, she'd booked a pair of tickets for the “Steve” show, hosted by Steve Harvey. When Everton heard the news, he felt excitement for the first time in a while — until the couple was seated in the very last row.

But during a commercial break, Steve decided to pay a visit to what he called the “nosebleed section” where the Tullochs were seated, and after meeting them asked, “What’s going on with you young man? Do you want to ask me something?”

It showed on Everton's face that he was hungry for advice. After working for the Coca-Cola Company for nearly 15 years, rising from an entry-level merchandiser to director of sales managing 12 representatives, Everton was laid off as a result of restructuring when his division was sold to another beverage company. Pursuing similar work opportunities, he consistently heard he was overqualified and became very discouraged about his prospects.

“How do you stay motivated when you’ve been out of work?” he remembers asking Steve, who he calls Mr. Harvey. After a bit more conversation between the two — despite producers' pleas to get back on track with the show — Steve gave Everton his best advice: “Sometimes God does that,” he said. “He takes what you think is a blessing to give you a bigger blessing. Your gift is going to make room for you.” Steve inquired what Everton had the most passion for, what his gift was, to which Everton responded, “I’m pretty good in the kitchen.”

Born and raised in Jamaica, Everton came from a long line of cooks — professional and amateur. “Food played a vital role in my growing up,” Everton says. His father was a chef in the army and his paternal grandmother owned a bakery, while his maternal grandmother was a cook at her husband’s restaurant.

Every Sunday, when the family got together for dinner, Everton paid close attention to how his grandmother prepared her dishes. “My cousins would be outside playing and I would be with my grandmother trying to learn everything.”

He continues to make those recipes to this day, and he learned the secret to her oxtails and curried chicken. But despite the joy he felt when in the kitchen, he didn’t consider it as a career. “I didn’t feel like it was my calling,” he says. “I had a knack for business.” 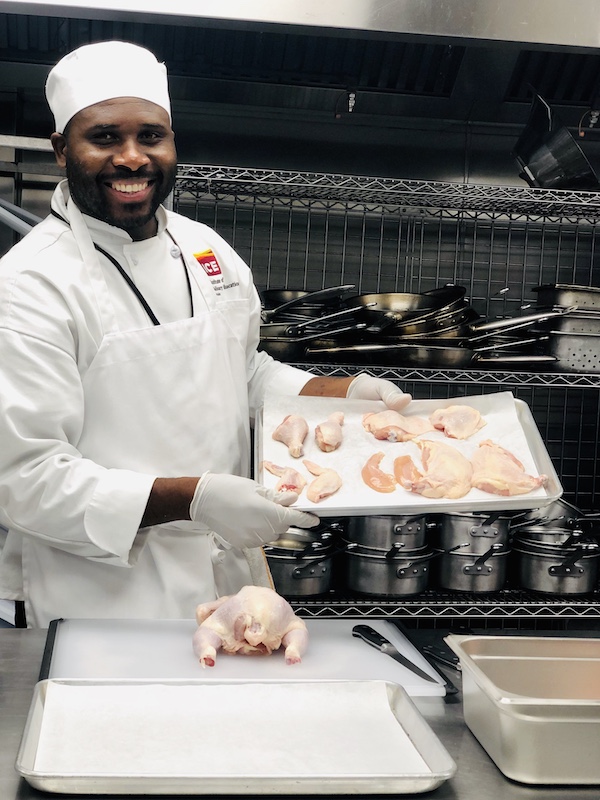 After completing the next segment of the show, Steve surprisingly offered to pay for Everton's professional culinary education. After the taping, Everton researched schools in Los Angeles where he might want to attend, and ICE’s Los Angeles campus came onto his radar. He took a tour with an admissions representative, and his excitement began to build.

“When I walked down the hallway to see the chefs that had been through ICE — chefs on TV, chefs with accolades or chefs whose restaurants I’ve eaten at — it was an overwhelming sense of pride once I was accepted,” he says. On day one, in awe of his new reality as a culinary student, Everton photographed himself in his full uniform before getting to campus. “I felt so amazing,” he says. “It was like one of those dreams you never knew you had.”

Everton was fortunate to start his journey at ICE with Chef Mike Pergl, who sadly passed away in early 2020. “He made everything a teachable moment, and he showed a genuine interest in our well-being,” Everton says of the instructor who instilled confidence fabricating chicken. “I can’t tell you the last time I bought parts of chicken. I buy the whole thing because I love to fabricate.” Everton shares that the loss of Chef Mike still has an impact on him. “The things he taught me I put into practice, and I made good on what I promised him: I would get a good job and start my own business one day.” 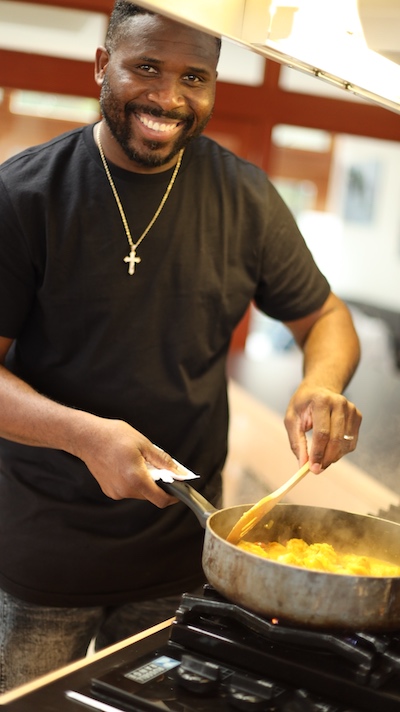 Since that first day at ICE, Everton has been carefully plotting the launch of his Jamaican food truck, and first, he learned the ropes of a fast-paced restaurant kitchen, completing his externship at Hollywood’s Beauty & Essex, where he still works today. “I’m now the trainer for all new hires,” he proudly says. “I train them on how to cook, prepare, clean, do inventory.” He’s worked on every station in the kitchen.

Just as he navigated his way up the ladder at Coca-Cola, Everton excelled on the line at Beauty & Essex. “ICE gave me the tools,” he says. “I’m not scared of anything in the kitchen. Before, I would shy away or try to avoid doing things. ICE is so extensive — from learning how to correctly hold a knife to all the cuisines. The program hits on so many different angles and scenarios. When you leave, you will be well-rounded because you have knowledge of everything food-related, period.”

Everton is grateful to the Steve & Marjorie Harvey Foundation for providing him with the funding to achieve his dreams and especially thankful that he was able to discover his gift. “Without passion, sometimes you feel like you have no purpose, but following your passion, your life will have purpose and you will do exactly what you have been called to do.”