How the McBride Sisters are Crashing the Wine Party

The McBride sisters started their wine business in 2005, six years after meeting each other for the first time. Now their women-led, Black-owned company aims to shake up the wine industry.

Half-sisters Robin and Andréa launched their California wine company, the McBride Sisters Collection, in 2005. First importing wines from New Zealand, the duo is making bottles (and cans!) from their own blends today, on a mission to transform an industry dominated by white men with a women-led, Black-owned business.

The McBride sisters grew up in the middle of wine country — continents apart. Robin is from Monterrey, California, and Andréa is from New Zealand; for the first half of their lives, neither knew the other existed.

Their biological father wasn’t around for much of either sister’s life, but before he died in 1996, he asked his family to help unite his daughters. Three years later, the sisters who'd been separated by an ocean met at New York’s LaGuardia Airport. As Robin and Andréa's relationship continued, they bonded over their shared connection with wine. 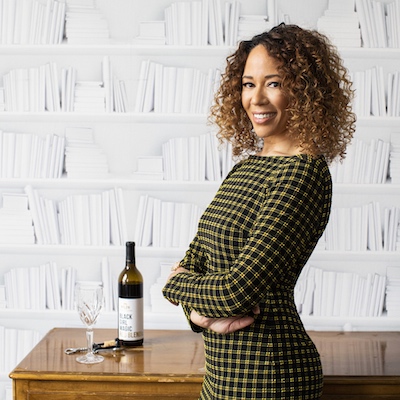 Andréa, who was 16 when she met Robin, moved to the U.S. and attended high school in Los Angeles, eventually attending the University of Southern California for her undergraduate degree. During that time, Robin would drive down from Northern California to meet her sister on the Central Coast, amid vineyards, wineries and tasting rooms. Eventually, the idea of starting a wine company together seemed obvious, but neither sister had previous experience in the industry.

Fear of the unknown did not stop them. Instead, they jumped in feet first and have since built their business into one of the largest Black-owned wine companies in the U.S.

Robin graciously joined us for a virtual event to share her journey in the wine world and offer entrepreneurial advice. Here are some of the highlights:

Note: This interview has been edited for clarity and conciseness.

What were your plans after you graduated high school before you knew you had a sister?

I actually finished high school in my sophomore year, I tested out early. Traditional academia was not the place for me at all. I went on to our local engineering school at Monterey Peninsula College and went into the sciences. I've always been a biotech/earth science kind of kid. But I didn't really know specifically what I wanted to do.

I started working early on in instrumentation and that’s where I got an appreciation for processes, engineering and all the things that go into developing a product and bringing it to market. I had this love and appreciation for nature and agriculture. I grew up in Monterrey near Salinas Valley. It’s all based in agriculture, called the salad bowl of the world, where all the lettuce, celery, broccoli, spinach and ground vegetables come from, as well as... Monterrey became a prominent wine grape growing region.

By the time that my sister, Andréa, and I met and got to know each other and understand what our experiences were as individuals growing up, we realized that we have this thread in common. Once we started to understand that about each other, and we had the opportunity to spend time together, it became something for us that was like, okay, you know, how many times do you need to beat us over the head?

How did you embark on that path?

We saw that this was a space where we can affect so much change and do so much good in terms of progress within the industry. However, that being said, wine is a very capital-intensive business, right? We had a few pretty ginormous issues: we didn't own a winery, we didn't own vineyards, we didn't know how to make wine. And, we didn't have any money to start a winery. We had this idea that we felt had legs and we felt that we were the people that were trying to do this. But we didn't necessarily have the experience or resources to launch into what is a very old boys club, right?

Can you tell us a little bit about how you got the business off the ground?

We initially felt that becoming an importer of New Zealand wines was the least capital-intensive way and the lowest barrier to entry. My sister Andréa had wine-making families that she was close to that were literally her neighbors where she was growing up in New Zealand. We thought we can become an importer and we can get a license, which I will never forget was precisely $895, probably all of the money that we had at the time.

My background in electronics and the business I had been in before I was in charge of importing and exporting goods. I knew I could get anything around this globe. Then we did a little bit of deal-making with the wineries down in New Zealand. We brought in these beautiful wines and we had a lot of great success, which speaks a lot to the wines. It also speaks to our tenacity because we really had no idea what we were doing. We just knew that there was an opportunity.

I spent my days cold calling restaurants, wine buyers, wine directors — whoever the buyer was for restaurants, hotels, stores all up and down California — saying we have these beautiful and amazing wines that you are going to love. I got hung up on a lot. I got yelled at a lot. What we didn't know was there's a way to go about this business, but we didn't know what we didn't know. We were in the space and really advocating for products that we believed in. We kind of did everything the wrong way, but at the end of the day, it worked in our favor. We got into a lot of really prestigious accounts.

When did you add your own name to the label?

At a certain point in 2017, we were convinced by one of our retail partners who said, “Why do you guys have all these labels? What's behind these wines and what's behind these brands?” So we listened to that, and in 2017 we launched McBride Sisters Collection. We produce wines that can be found in retailers like Target and Whole Foods. We're in the top 2% in terms of scale and amount of wine that we produce in the country. I say that not to toot my own horn, but also to say that it proves our point from when we started 16 years ago that there’s consumer resonance. People outside of what the standard has been, you know, older, white males, and here's a couple of brown women in this space, which is not typically seen as the standard for success. But a few years later, here we are.

How has the industry changed since you entered it?

Literally when we started, we could be at an industry event and we saw it: no people of color and very few women. It's come a long way since, but a few years ago we were seeing that, although the demographics from a total industry perspective showed there was a lot more women, a lot more people of color, the numbers within leadership — executive levels, ownership levels, really anything that’s sort of decision-making, which is going to determine the trajectory of the industry — were really, really low. They were out of proportion. So we asked, “What can we do?” The challenge is not so much getting into the industry, but getting into these positions that are meaningful and impactful to the future of the industry. We created the She Can Fund (She Can is also one of our brands). When we launched that product, which is wine from New Zealand and wine from California, we dedicated each of the wines to each of our mothers. At the same time that we launched the product, we launched the funds specifically dedicated to the professional advancement of women in wine and spirits.

Marketing is a huge part of your brand. Any specific campaigns that have performed well?

We do things that are very different from what wine and spirits companies traditionally do. We have a lot of collaborations that we've done. With Simon & Schuster we did a book and wine club, which for the wine industry is wild, especially during the pandemic. We've learned book clubs, even if they weren't meeting in person, were meeting virtually and there's always wine involved, right? It seems like a very logical space for us to be in.

We have this partnership, with our Black Girl Magic wines, to bring together black women authors and our wines that are paired with the book that's being featured.

What advice do you have for future entrepreneurs?

Don't act like you don't have challenges, don't act like you don't need [help]. Be really open and really receptive and talk your truth about wherever you're at. Make yourself available, through networking, to receiving that advice. And even if you don't see somebody who naturally you feel like, okay, they know exactly what I'm going through, cast a wide net and be honest and be open and see who is able to help you.

What’s next for McBride Sisters?

We have a lot of big ideas. We think really big, so we have a lot of innovation and, and for us, innovation is new products. A big piece for us is in furthering collaborations and expanding wine into other lifestyle areas. We're looking forward to a lot of collaborations with chefs, restaurants, hotels, travel companies... Also expanding outside of the U.S. In 2020, we were going to be moving into Canada, the U.K., the Caribbean, Bahamas, Australia, New Zealand, all those things. That all came to a stop for a bad reason and a good reason. The bad reason was because of a pandemic. The good reason is that everybody in the United States started drinking more wine. We actually got to a point where we literally didn't have enough wine. We definitely didn't have enough to go out into other markets. Now that we're sort of leveling out, we've got some more wine. So I'm looking forward to expanding into markets outside of the U.S.

Start your own business with a diploma in Restaurant & Culinary Management, and complement your education with a certificate in Intensive Sommelier Training.