Behind the Scenes of a Culinary Production Career

How an ICE graduate made his way to food media in LA.

After losing interest in his engineering studies, Maxwell Nerenberg left the academic world behind at the end of his junior year of college, focusing on his biotech engineering job while considering other options. "Cooking had been something I always loved ever since I could stand and hold a spoon," Maxwell says of the impetus to pursue a culinary education.

Maxwell’s mother would often come home late from work and they would prepare dinner together. "We would cook and then go watch cooking shows and see how we could learn and improve,” Maxwell says. Their celebrity chef cookbook collection often served as inspiration for new dishes and entertainment. "I have never been one to say no to something new to eat, it was always an adventure."

With amateur and professional experience after a job preparing small bites for guests at catering events in high school, he took to the internet and searched for the top culinary schools in the U.S. "I went through the list, what I could afford, what I couldn’t afford, locations I didn’t want to live..." said Maxwell, a native San Diegan. "I liked Southern California. I'd lived here my whole life, so why not go to LA?"

At the time, he thought going into the film industry would be "so cliché." Little did he know the worlds would collide when he enrolled in Culinary Arts in 2020. Contrary to his college experience, Maxwell felt engaged at the Institute of Culinary Education's Los Angeles campus.

"I loved ICE," he says. "It didn’t feel like a classroom. There were only 10 of us, so it was very easy for us to become a close family." In the beginning, given his prior cooking experience, the lessons came easy. As the program evolved, new cuisines were introduced. "I hadn’t been able to dive that far into those countries. Those lessons were my favorite — exploring flavors and techniques from around the world," he remembers.

Halfway through his program in early March 2020, Maxwell and his classmates were tasked by Career Services to prepare to apply for externships, when a lucky break happened. "I had just updated my resume, it was brand spanking new, and one of the jobs didn’t want a copy so I had it in my car," Maxwell explains. Before class began, a group of television producers working on a pilot was touring his classroom. Curious about their visit after seeing the Disney logo on the set mockups, Maxwell inquired about working with them. Though they needed dishwashers, Maxwell offered up his experience driving a box truck. The producer was intrigued, and Maxwell ran to grab the extra resume in his car. That weekend, Maxwell joined the TV shoot as a production assistant. "I blame part on fate and a hell of a lot of luck," he says.

His driving skills and willingness to do anything came in handy, and his culinary curiosity led him to find a mentor in producer Katie Allen, a former student of ICE Chef-Instructor Peter George, who offered to guide Maxwell should he be interested in production. 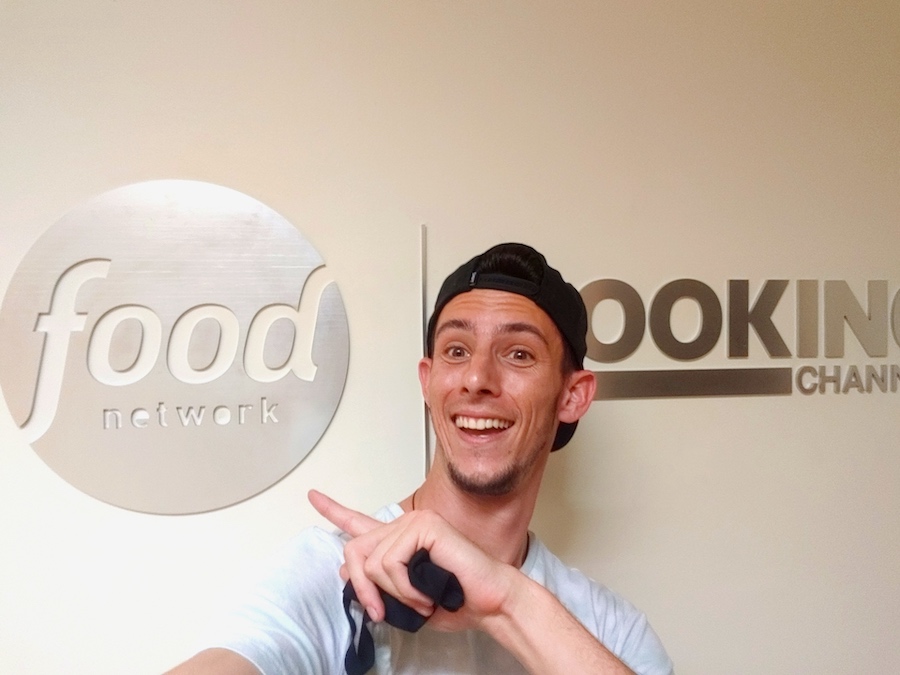 Maxwell took her up on the offer when he decided to pursue food media, starting with work on the set of Food Network’s "Supermarket Stakeout," where Katie taught him what happens behind the scenes. "I bounced around to different parts of the culinary team: I saw set design, equipment, helped set-up pantries, worked on beauties and plate design, I was in the control room and behind the camera and generally learned what it was like to be a culinary producer," he says.

After "Supermarket Stakeout" he went on to work on the "Battle of the Brothers," a new show with chefs Bryan and Michael Voltaggio, and then relocated to Texas to work on "Barbecue Brawl," filming two seasons over six weeks. By the beginning of the second season, Maxwell was promoted to assistant food stylist, working on beauty plates and on-set production duties.

The production path has afforded him the opportunity to travel. After Texas, Maxwell headed to Ben & Jerry’s in Vermont, where he worked on "Cold Wars." The most recent show filmed in New York City where Maxwell drove a 15-passenger van in the Big Apple for the first time, shopped unique food markets in Brooklyn and worked alongside Chef Michael Symon.

Maxwell never fathomed that he'd be working among the same celebrity chefs he once watched on TV with his mother. "I got to help [Bobby Flay and Michael Symon] cook, see recipes they were forming, talk about techniques and provide them with specific ingredients," he says, explaining that culinary production requires diligence, a roll-up-your sleeve attitude and attention to detail.

The work is tedious and can range from cleaning the incoming ingredients, like removing dead leaves, to readying produce for the chefs, like splitting up bulk herbs into smaller bunches. "Something like 'Barbecue Brawl,' which is completely outdoors, means we received produce every three days, and all of it has to look pretty for the camera."

"ICE trained me," Maxwell adds. “Though I went in knowing some cooking technique, being able to get a better sense of what I was doing — I realized I had been doing things wrong. ICE helped shape how I look at food, too. There’s a lot more to it." He credits ICE for helping him with understanding how to build flavors and design eye-catching plates, something he finds important in his work as an assistant culinary producer. "Seeing how we need to layer things and create something visual for the audience, all that was honed by being at ICE," he says.

"I would like to be a culinary producer one day," Maxwell adds. "I love being on set. It keeps me traveling, meeting people and experiencing new things."

Pursue a future in food media with a Culinary Arts diploma.