We asked Black chefs at ICE about who has influenced them in the food world.

There are so many influential cooks in Black culinary history, from modern celebrities to the storied authors we celebrated in 2020 to the indigenous Gullah Geechee who Mashama Bailey taught us about in a recent cooking demo — and of course, our own instructors and alumni impacting the culinary world every day. We asked a few of them to tell us about one Black chef they'd like to credit for making history. Here's who they chose:

"There are so many Black chefs that I admire, past and present. While there isn't the same representation that we see in, say, the French male category, there are still a lot of chefs and restaurateurs that have built tremendous careers that paved the way for so many of us today," ICE Chef Adrienne Cheatham explains. "One such person is Cheryl Day. I could talk about Edna Lewis, Lena Richard, Leah Chase, Patrick Clark or any number of other chefs, but it's Cheryl who has taken the mantle as a modern-day role model."

Cheryl is the baker and co-founder of Back in the Day Bakery in Savannah, Georgia, where she and her husband, Griffith Day, have specialized in Southern sweets since 2002. "Cheryl is at the top of her game: Her bakery is consistently written up for their amazing creativity, technique and delicious desserts," Chef Adrienne says. "She's written cookbooks and started an organization to mobilize restaurants in the fight against racism and for social justice."

A post shared by BACK IN THE DAY BAKERY 🧁🍪😷 (@backinthedaybakery)

The pair has co-authored five Artisan books, including "Cheryl Day's Treasury of Southern Baking" available for preorder now, and their pastries ship nationwide via Goldbelly. "Cheryl is also an example of how to run and pivot a food business during tough times while remaining true to the vision she set out to execute. She and her husband, with whom she owns the bakery, implemented a new schedule to provide a better work-life balance for themselves and their team," Chef Adrienne continues.

"While most savory chefs would likely choose someone on the same side of the kitchen, Cheryl is an obvious choice. She is passionate about food and its history, the future of our industry and the rich legacy of Black people in the American food conversation," Chef Adrienne concludes.

"Chef Jeff Henderson authored a book pretty early on in my career called 'Cooked,'" ICE alum Kwame Williams says. "His story was super inspiring because it was a typical chef story of coming from a broken place and the kitchen being a sacred place that takes your battered, beaten, wounded and addicted. The chefs I had previously come across were more polished."

Jeff become the executive chef at Cafe Bellagio and Caesars Palace after serving a decade in prison. Now the author and motivational speaker founded The Chef Jeff Project, providing culinary and hospitality training to "disenfranchised youth, formerly incarcerated individuals and those seeking a second chance." The concept began with the 2008 Food Network show on which Chef Jeff trained at-risk young people for his catering company Posh Urban Cuisine.

"In short, he learned to cook in jail and less than five years after being released, was named chef of the year in Las Vegas," Chef Kwame explains. "For someone who never cooked professionally and based a career on passion and know-how to be acknowledged in a few years was one of the biggest inspirations for me early on in my career."

Now Chef Kwame is intentional about inspiring the next generation. "I try to bring along as many young aspiring chefs into my situations as much as possible," he says. "If I’m going to events or awards weekends, I bring someone young with me so they can come out and mingle with other chefs that they admire. I’ll have aspiring chefs who haven't even made it to a prep cook yet, even dishwashers, and I can bring them places and show them: 'Yes, you’re where you are right now, but you can keep going and eventually do things like this.' When there are young chefs who admire me through Instagram or working with me hands-on, I bring them along on my own personal journeys."

"There have been many chefs that have left a mark on me — some leave behind a sprinkling of their pixie dust when it comes to the fundamental kitchen cooking techniques and how to better apply them. With others, it may be lessons in business, and they leave behind the knowledge on how to run the numbers, get creative with concepts and such," ICE Chef Chris Scott explains. "For me, the influences that stick the most are the spiritual lessons behind why we do what we do."

After leaving Birdman Juke Joint shortly after it opened in Connecticut in 2020, Chef Chris reflects, "when I opened that restaurant in Connecticut and had the most dreadful time in my career, I felt alone. I felt as if I had nowhere to turn personally or professionally. And then I met Chef Mona Jackson. Chef Mona is a legend in the Bridgeport community. She has the kitchen skill and knowledge of Leah Chase and the sass and personality of Moms Mabley. She is indeed a diamond in the rough located in a city not necessarily known for its food culture."

Chef Mona owns and operates an organization called Cook and Grow, which teaches cooking, nutrition and kitchen safety, including classes on how food can affect diabetes, high blood pressure and childhood obesity. These classes are for everyone, but her focus is mainly young kids ages 8 to 13. She offers scholarships for kids that excel in the program and is on the lookout for gifted kids in the Bridgeport school districts that may have an interest in cooking.

"Chef Mona doesn't need large-scale, nationwide notoriety — she keeps it real and keeps it local," Chef Chris says. "She is passionate about food and epitomizes, to me, what chefs should truly be about: inspiring, educating, paying it forward, respecting the craft and feeding people with love. Chef Mona basically piggybacked on what other chefs had already laid a foundation for me, but she also reminded me that it's always about the food and the craft, never about any individual chef. We're here to get the next in line prepared for the great journey of finding the perfect meal and continuing this amazing story of our great history with food."

"When I was in culinary school, my friends and I were reading through the 'Aquavit' cookbook, and I remember thinking, Wow! This chef is so talented and looks like me!" ICE Chef Nyesha Arrington recalls. "Up until that point, most television shows and cookbooks I saw were very Eurocentric. We were learning about French gastronomic art but very little time was spent on other regions and the diversity of chefs of color. I had the pleasure of meeting the cookbook's author, Chef Marcus Samuelsson, in 2014 and he has been an amazing mentor to me ever since."

Marcus is the chef-owner of Red Rooster in Harlem and a dozen other restaurants in California, Chicago, Miami, New Jersey, Sweden and beyond. He's published seven cookbooks since "Aquavit," including most recently, "The Rise: Black Cooks and the Soul of American Food." Chef Marcus has won five James Beard Awards, including the Who's Who of Food & Beverage in America in 2016. We spoke to him in 2020 about his work fighting food insecurity with World Central Kitchen.

"During elementary school, I used to run home from school and watch all the cooking shows possible. One chef I came across was B. Smith," Chef Nyesha continues. "She always had a poised elegance about herself and I remember wondering why there were not more chefs of color in the spotlight."

Barbara Smith was the chef of B. Smith's restaurant, a Midtown Manhattan landmark from 1986 to 2015. She opened outposts in Washington, D.C., and Sag Harbor, New York, in the '90s; hosted “B. Smith With Style” on NBC; and authored three books, including “B. Smith Cooks Southern Style.” B. Smith was also known for modeling, entertaining expertise and raising Alzheimer's awareness. She died of the disease in 2020.

"When B. Smith passed away, I felt compelled to continue living out her legacy of hospitality and entertaining," Chef Nyesha says. "To gather friends and family at the dinner table is to share in storytelling and the creation of memories."

"With the progression of food heading toward more sustainable practices of living, plant-based cooking is at the top of this dialogue," Chef Nyesha says. "Healthy eating is imperative for the output of a high-functioning person. When I switched to a plant-based diet in 2019, I saw positive changes in myself that will continue to grow over my lifetime. Bryant Terry was one of the first chefs I came across to celebrate a vegetable-based style of cooking while never sacrificing flavor and technique." 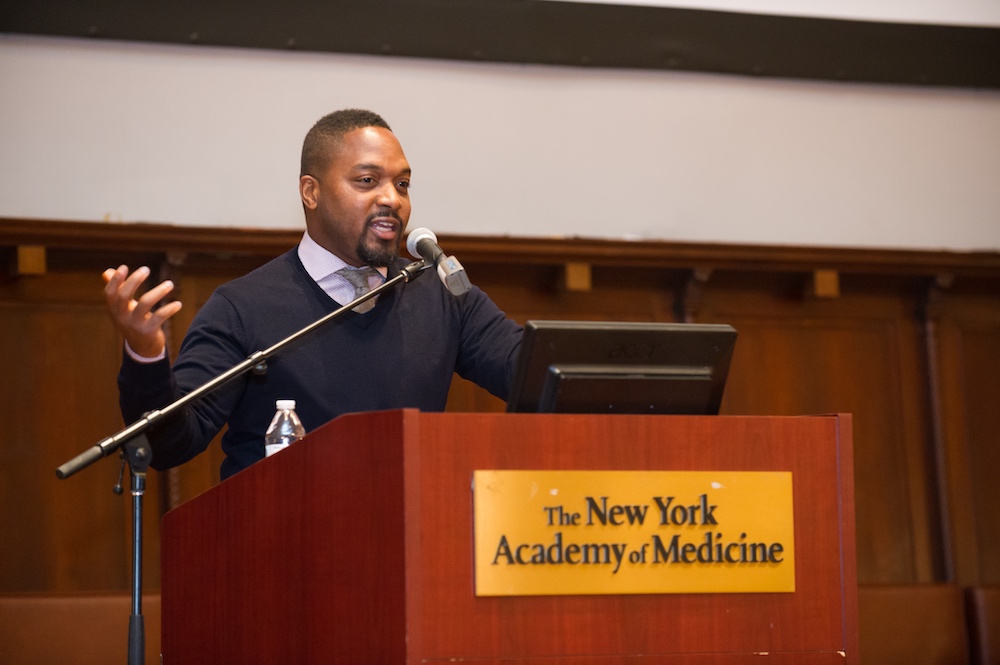 Bryant is a vegan chef advocating for health and sustainability through writing and education. He released "Vegetable Kingdom: The Abundant World of Vegan Recipes" in 2020, following the success of "Afro-Vegan," "The Inspired Vegan," "Vegan Soul Kitchen" and "Grub: Ideas for an Urban Organic Kitchen." He won the James Beard Foundation's Leadership Award in 2015.

"These chefs were some of the influences in my life, and there are countless more whose legacies will live on in recipes, storytelling and in our hearts," Chef Nyesha concludes.

Make your own culinary history with career training at ICE.

There was a time in this countries history, where white men did not cook a great deal; that was a job for women and slaves.During this time there were many renowned Chefs of African descent cooking in America. In fact, one of the first American born citizens to be trained in the French Culinary tradition was James Hemmings, a slave owned by president Thomas Jefferson and the brother of Jefferson's mistress, Sally. George Washington also had a black chef, his slave Hercules. Another name forgotten by many in recent years, is that of another great American Chef, Executive Chef Patrick Clark of Tavern on the Green in NY. Patrick was a MAJOR influence in the culinary revival that is still having an effect on chefs in this country today. Patrick was among the first to mix fine dining and bistro as well as one of the first to apply French technique to regional American cuisine.