ICE alum Kenneth Peterson Jr. prioritized fish and family on his journey to a Michelin-starred restaurant.

Family is incredibly important to Kenneth, who twice put plans to attend culinary school aside to care for his ailing parents, the people who fostered his love for food.

The Peterson family rarely dined out. Kenneth's mom and dad were home cooks, and every Saturday they’d serve their kids breakfast in bed. One Saturday Kenneth decided to return the favor, and while the biscuits were from a can, the eggs were watery and the bacon was undercooked, he had discovered his passion for cooking.

“My love started from my parents serving me and my sister,” he says. “Years later they told me they didn’t want to discourage me, but that I needed cooking lessons.”

That set Kenneth, a Louisiana native, on a course to better his culinary skills. He started cooking more alongside his maternal grandmother to learn her delectable recipes. “As I got older, I became the friend who cooked,” he says. Throughout high school, he hosted gatherings where he prepared drumettes, fried chicken, jambalaya and homemade crispy onion rings. “But when I graduated high school, I did not think about cooking professionally,” he says.

Instead, Kenneth went on to study business and psychology in college while working. He delayed earning his undergraduate degree and moved back home when his mother fell ill. During that time he worked at PepsiCo and then for a commercial cleaning business. Kenneth eventually graduated from the Southern University at New Orleans and during that time bought his own cleaning franchise, which would grow to 37 employees and 22 accounts.

“There was always a void,” he says. “My happy place was in the kitchen and anyone who knows me would second, third and fourth that.” 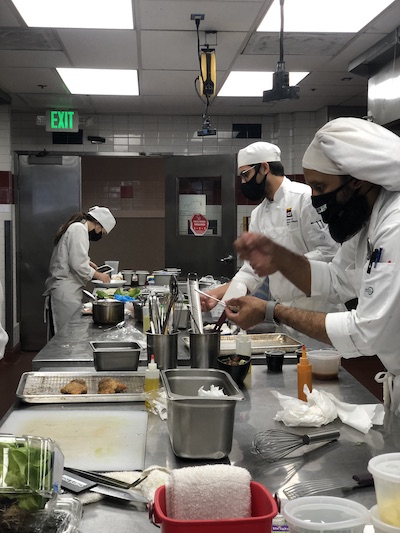 His mother fell ill again and unfortunately passed away, so Kenneth started caring for his father, a disabled veteran. It wasn’t until the pandemic that the timing was right to revisit the idea of culinary school. He happily discovered ICE’s accelerated program, just seven months, and toured the Los Angeles campus with an admissions representative. Finally enrolling was transformative.

“It changed me as a person as far as my awareness in the kitchen,” he says. “It changed my level of cooking and changed my plating. It opened me up to trying new dishes and helped me see food in a different light.”

Though a hurricane in New Orleans caused him to miss student orientation, Kenneth finally moved to Los Angeles enrolled as a dual diploma student in November 2020. In the mornings, he cooked in the kitchen classroom, and in the afternoons, he hit the books for the lecture-based Restaurant & Culinary Management program taught by Director of Restaurant & Hospitality Management, Mishel LeDoux.

“I can’t say enough about Ms. Mishel,” Kenneth says. “She brought so much experience to the program from being in the industry, real-life experience with celebrity chefs. She could show us real data versus examples from a book. It was amazing.”

On the culinary side, Kenneth put his knife skills to the test when he assisted Chef JJ Johnson at the South Beach Wine & Food Festival. “I had to fabricate 20 tunas,” he says. “Fish fabrication [in school] was great because I love seafood. I grew up on the bayou.”

Though his aspiration to attend culinary school was postponed by seven years, Kenneth is happy to have finally fulfilled his goal.

“I wanted to learn the fundamentals, I wanted to be respected as someone who went to school, has a diploma, and took the time and dedication,” he says.

For his final menu in the Culinary Arts program, Kenneth made a creole shrimp appetizer with sweet potato grits followed by poached salmon with manilla clams sauteed in white wine, butter and herbs. Eventually, he hopes to apply the knowledge from his programs to open a contemporary, New Orleans-inspired seafood restaurant. 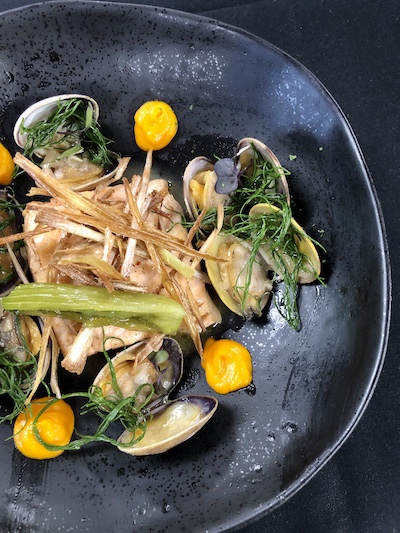 With Mishel’s help, Kenneth interviewed with Chef Michael who invited him to stage, cranking out Japanese cod, salmon and cooked scallops from 2 p.m. until midnight. He’d soon be asked to join the team full-time as a line cook on garde manger.

“We’re all about hospitality,” Kenneth says of New Orleans. “We thrive on travel and tourism, and at the heart of it, any great restaurateur knows what brings in the money.”