A lifelong learner, Chef Lachlan shares his motivation for leading a culinary school.

Chef Lachlan (left) listens as Chef Curtis Stone is introduced for a guest lecture on campus.

Our L.A. campus president Lachlan Sands has been enrolled as a student all but two years since high school, culminating in a Ph.D. in May. Chef Lachlan’s natural curiosity and desire to understand why people think the way they do is what led him to pursue his doctorate and a career in education.

Early in his professional life, Lachlan traded a stint in the healthcare industry to pursue his true passion: food. The Australian-born chef and president happily informs the Institute of Culinary Education’s incoming classes of students just how much he enjoys food — cooking it, reading about it, and of course, eating it.

Chef Lachlan’s restaurant career began in the kitchen at Water Grill, helmed at the time by Chef Michael Cimarusti, who Chef Lachlan credits for instilling in him the highest standards, something he applies each day at ICE. Here, the former president of Le Cordon Bleu Pasadena and Las Vegas opens up about what led him to culinary education and what he thinks it takes to be a successful student at ICE.

Where did your interest in food develop?

Growing up in a little country town in Australia, in the middle of nowhere, haute cuisine was fried things and British food — not like the British food you see today, the British food of the ‘70s. It was not of a high quality, but my mother was from Latvia and she had innate cooking skills. She’s a great home cook who has a natural way with food, so I really enjoyed eating. That’s the key: In order to enjoy eating after I moved out of the house, I had to learn how to cook. I liked cooking and I Iiked the end result of cooking. It brought me a lot of joy.

When did you know you wanted to be a chef?

In undergraduate, I double majored in biochemistry and history because I wanted to be a doctor. At 19 years old, I wanted to make money. That is the worst possible reason to become a doctor, which I realized when I got closer to the end of college. I ended up in the healthcare field for a couple of years and I really didn’t enjoy it. I went back to culinary school because my wife Jennifer knew I really wasn’t enjoying work, so she cut out an ad from the Sports section of the L.A. Times for the Southern California School of Culinary Arts and left it on my pillow. Two weeks later, I was a student.

What kind of culinary student were you?

I was a terrible student in college. I was unprepared. I was lazy. I was disinterested and disengaged. I barely made it through college. Then when I got out and had to work, life taught me a few lessons about work ethic, and when I went back to culinary school, I was so motivated by being there. I would miss a lot of days in college and when I was told in culinary school that for each absence I would lose 10% of my final grade, I was terrified. I thought I would not meet that standard. I thought I was going to fail. Fifteen months later, I had perfect attendance because I loved being there. I loved working with my hands. I loved working with food. It fit me perfectly, it was no effort coming to school. I never had to drag myself. I became a good student while I was in culinary school.

You’ve been a student for a very long time, how many years of schooling do you have?

I think I’ve been to every possible kind of school. I went to a community college for two years before transferring into UC Berkeley, so that’s five years. Then I went to culinary school, which was 15 months, and I went to graduate school at USC. Now I am graduating from Claremont Graduate University in May, and it took me 10 years to get my doctorate — that’s 16 1/2 years!

How did you end up teaching in a culinary school?

I started working in restaurants before the end of culinary school and right when school ended they asked that I come back to teach academic classes because they thought biochemistry and sanitation were related, which of course is not true, it just sounds good. So, I taught History of Food and Sanitation for about two years. After I was out of school for four years, they asked that I come back and teach Culinary Arts full-time.

What was the impetus for getting your master's degree at USC?

When I was promoted to a lead instructor, I realized I needed more education about education. I was a good teacher, but I knew I needed more fundamental knowledge about the teaching process. 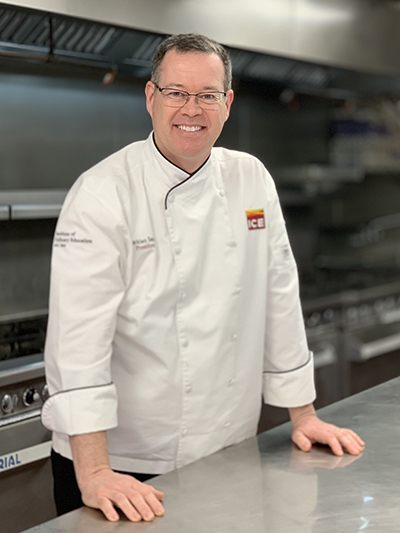 How have your many years as a student impacted your role as campus president?

My belief is that teaching and learning are two sides of the same coin. The best teachers we have are also the best students we have. By maintaining a close interaction with learning and making sure that I’m constantly learning, I’m also reminding myself of what my students are going through each and every day. I can empathize, I can sympathize, and I can make change that will help them. I can better recognize what their needs are because I’m a student at the same time.

What are keys to student success at ICE?

There are three things that we can’t really teach that students have to bring with them and that is: reliability, coachability and enthusiasm.

There’s a culture in the kitchen professionally that relies on people of their word. If you say you’re going to get it done, you need to get it done, and I, as a chef, need to trust that you are going to do it. Reliability, more than any other single trait, is the fastest way to promotion in a kitchen. It’s not just task-based, it’s also being at work on time, being at school on time, being in uniform, being professional – it’s all of the things I would expect you to do and the standard I expect you to live up to. I can’t keep chasing people to do this stuff, they need to do it on their own and be self-directed.

Coachability is being able to say, “yes, chef,” and watch the way someone is training you to do something and then be able to replicate that. Over time, as you get more skilled you will be able to improve on those processes, but on the front end you have to be open to different perspectives, techniques and proficiencies that you might not be used to.

And finally, enthusiasm. It’s a challenging industry that involves long hours and challenging days. But every single day we get to work with food and we get to create art with food. We get to feed our guests and have them smile and say, “that’s delicious,” and that drives people back to this industry, the fulfillment that those moments bring. You need to have that enthusiasm and that joy of food in order to be successful both here and in the industry.

You’ve lived in the area for more than 15 years, what do you love about Pasadena?

Pasadena is a crossroads for things that I value highly: culture, education and science. All of those things are a core part of the values of this city. We are just 25 minutes from Downtown Los Angeles, and yet Pasadena has a character and history and a pride completely independent of Los Angeles. They call it the Crown City because we are 1,500 feet above sea level here. We are at the base of the San Gabriel Mountains, we have access to beautiful natural wonders with hiking, we have great restaurants, and we have amazing, world-class educational facilities. We also have the Rose Bowl, the Rose Parade, Caltech, The Huntington museum, the Norton Simon Museum — it is an unusually rich city. It’s just a lovely place to be.

You’ve seen many students come through the doors. What excites you most about them?

I’m office-bound a lot, so one of the great joys is when I simply walk downstairs to one of the labs and see students learn. When they come back six months later and tell you about their experience and how they have blossomed into great culinarians, that really brings me a lot of joy. We have a lot of students come back here who haven’t really experienced academic success before, and they very often find it here because culinary school speaks to their soul. It’s so motivating to be here when they are academically successful.

Why is it a good time to be in Los Angeles?

It’s one of the most exciting food scenes in the country — so exciting that many New York chefs have traveled to L.A. in the last few years, and now we’re attracting international chefs — not just big names, but the biggest names. Massimo Bottura, who has one of the World’s 50 Best restaurants, Osteria Francescana, just opened Osteria Gucci in L.A.

Our dining expectations in Los Angeles are so diverse because we don’t have a Euro-centric core, we have authentic food from many parts of the world and a strong immigrant population bringing their food cultures, and instead of attempting to suppress those things, Los Angeles celebrates them. What that means is chefs can come to L.A. and be as creative as they want and they can combine flavor profiles from any country or region of the world and make their food truly emblematic of their own palates, which isn’t possible in most other food cities. That excites chefs. It means they can be true artists in L.A.

What does that mean for our students?

What keeps you most motivated?

Absolutely, 100% watching the students learn. There is nothing more motivating or fulfilling for me than helping students in their journeys. I’m very taken with the idea that my job is to support everyone else in the school, not just the students, but everyone who is here. My job is to help them help themselves. When I see students come in here, get to the end of the program, and be so much more confident and capable than when they started, we’re doing the right thing.

Meet Chef Lachlan on your free tour of our Los Angeles campus.