From Italian Restaurants to Inspiring Instructor

The first thing Chef Stephen Chavez remembers baking, with his mother’s help, was a pineapple upside-down cake that he discovered flipping through the pages of an issue of the children’s magazine, "Highlights," at 8-years-old. Chef Stephen grew up in the small town of Temple City, California, where family gatherings were frequent and featured dishes from his Spanish, Greek and Mexican heritage. “If you said to someone, throw me a tortilla, someone would literally throw you a tortilla,” Chef Stephen says. “That was my memory of food — gathering and being together.”

His interest developed in his teenage years when he took an entry-level job as a dishwasher and busser at a local Italian restaurant. His eyes often wandered from his duties to the orchestration of line cooks in the kitchen. “Eventually, I got up the nerve to ask if they could teach me how to cook,” Chef Stephen recalls. Before his shift, he'd study the restaurant’s menu and how to prepare authentic Italian pasta, doughs, pizza and sauces for the eatery’s recipes. That sparked a curiosity in the culinary profession, but before pursuing it as a career, he took a detour into the world of music, singing in a band, working in music stores and running promotions for bands. But he never stopped cooking.

“One day, I woke up and I was lost,” Chef Stephen says. “I wasn’t sure what I was going to do.” Though he loved music, reality set in that he was never going to be a star. He made a list of what he loved and cooking resonated as a new career path.

After working in a few kitchens, he determined that he needed to enroll in culinary school to get to the next level. “I went in knowing I had been cooking semi-pro for 10 years, but I still had a lot to learn, like proper techniques and terminology,” he says. Soon he discovered a passion for what originally piqued his curiosity: baking.

“When it came to pastry, I became inspired,” Chef Stephen says. “I found not only did I like it — I was really good at it.” He marveled at his aptitude for forming fondant flowers and his creativity when plating desserts. “I was making things look amazing to someone’s eye, and I never knew I could because I had never tried.” He credits his pastry instructor at the time, Chef Norma Salazar, who is now his colleague at ICE. 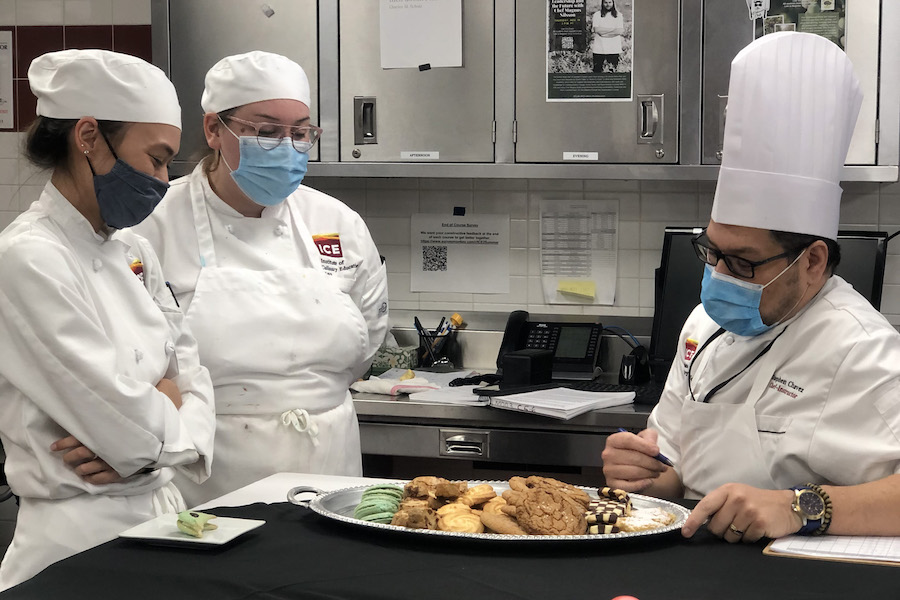 Soon after graduation Chef Stephen learned mass production as a professional baker creating desserts for venues like the Staples Center, Honda Center and the tony Jonathan Club in downtown LA and Santa Monica. After transitioning to sous chef at the venue owner’s restaurant offshoot, Chef Stephen had the opportunity to join the staff at Le Cordon Bleu, Pasadena. The chance to teach his passion was appealing as he came from a family of teachers and never shied from public speaking. He became an educator there for 14 years and taught every class in both the baking and culinary programs (and many academic courses). After an executive chef role at Tierra Mia Coffee Company and a stint working on the corporate side of the business at BakeMark USA, he returned to teaching when he joined ICE.

@iceculinary Welcome to Lemongrass. ✨🌱 As part of their curriculum, our Health-Supportive Culinary Arts students created a vegan, gluten-free fine dining restaurant for a day. #iceculinary#vegan#glutenfree#culinaryschool#eeeats♬ original sound - Institute of CulinaryEducation

Chef Stephen also loves teaching bread. “When the bread goes in the oven, I am excited and want them to check it out,” he says. His enthusiasm is evident and his knowledge of pastry is vast. He often gathers students for quick demonstrations, like glazing fruit tarts or breaking down sugar work, and provides one-on-one wisdom about instincts like proper cookie doneness. 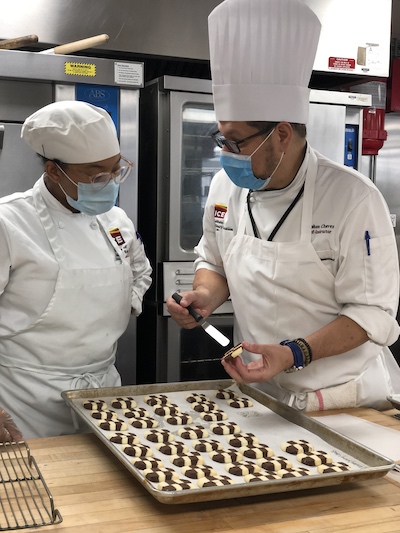 Though he no longer pursues music as a profession, Chef Stephen likes to fill his environment with music, often reggae. “I found that when I put music on in the classroom, it sets a tone and vibe and it gives people a little bit of rhythm,” he shares. Chef Stephen’s demeanor is caring and encouraging. “Through failure is how we learn,” he says. “Students should enjoy what they are doing and each day leave feeling great about what they did, whether that means they failed or succeeded.”

His teaching philosophy is “about giving them everything that you have of yourself for them to succeed. Seeing their success is more gratifying than my own,” he says. That success can be as small as the perfect rise on a soufflé or as big as a former student sharing news of a promotion. As for working alongside his mentor, Chef Norma, he says, “I am eternally grateful for the inspiration and guidance she has given me. She is something special and being able to work with her is an honor.”

Above all else, Chef Stephen hopes his students leave with self-assurance. “The biggest thing I want for them is to be confident and know they can accomplish what they want,” he says. “There are a lot of life lessons in the kitchen beyond cooking and baking, and if I have somehow helped them to find something in themselves, then that is what I was put here to do.”

Study with Chef Stephen in Pastry & Baking Arts at ICE.

Great story! He inspires me!

I just read with interest the background of Chef Steven Chavez.  I am wondering if your programs at ICE address ways to veganize classic desserts?  Personally, I have made a big switch in my diet to eating mostly plant-based meals.  Desserts are a continual challenge.  I am considering enrollment at ICE.

Hi Amy, the Pastry & Baking Arts program has a few recipes that are vegan. The program is designed for aspiring professionals who are planning to go into bakeries, hotels, restaurants, etc. so recipes aren't converted to accommodate the students' dietary and lifestyle choices. The Health-Supportive Culinary Arts program is 95% plant-based and includes a few weeks of pastry and baking. You can see how we use alternative sweeteners and baking conversions here: https://www.ice.edu/blog/sugar-alternative-sweeteners-baking