20 years of teaching macrobiotics and more, from NGI to ICE.

Elliott Prag grew up eating Ashkenazi cuisine at home until his mother gave him a book on macrobiotics in the 1980s. He devoured every chapter and discovered the health-supportive approach to food that he studied and taught at the Natural Gourmet Institute (NGI) for nearly two decades.

When NGI closed in early 2019, Chef Elliott joined the new Natural Gourmet Center at ICE as the program's first chef at our Los Angeles campus. In 2020, he returned to New York where he is the lead chef for Health-Supportive Culinary Arts today. Here, we caught up with the chef to learn more about his background, goals for his students and the future of health-supportive cooking.

What inspired your interest in health-supportive food?

When my mom loaned me some books on macrobiotics, I didn’t know anything about healthy cooking at all. I didn’t know there was such a thing, practically. At the time, macrobiotics was credited with curing all sorts of diseases, and I guess a light bulb went off: Wow, what I eat can really affect my health. I opened up a world I wanted to know more about. It was almost the first subject that was fascinating to me.

Did macrobiotics lead you to a culinary career?

I always had an idealized notion of what it would be like to work in the world of food. I grew up in this Ashkenazi Jewish family. As a child, I really loved going to restaurants. When I would eat out, even if they weren’t that good, it was something different than brisket or roast chicken with potatoes and carrots. I thought, wow, there’s a whole world of food out here. I started to see possibilities in the world of food. Somewhere between hanging out in restaurants and learning about healthy food, something clicked.

What were you doing before you enrolled at the Natural Gourmet Institute?

I had a lot of jobs in law firms while I worked my way through college and grad school at Wayne State. I loved reading, and English was the only thing I was ever good at. When this world opened up for me, my last job was in management consulting as a writer — I hated it. I thought, I just want a life that looks nothing like this. Lord knows, the Natural Gourmet Institute was that life, it really did change everything.

How did you discover the Natural Gourmet Institute (NGI) in New York, a jump from Detroit?

One of the things I read was “Food and Healing,” [NGI founder] Annemarie Colbin’s book, which I still think is a really rational and groundbreaking book about health-supportive eating. It’s still relevant today and our whole program was built on and came from that book. Now everyone talks about whole, local, seasonal and organic like it’s nothing. Annemarie was talking about this in the ‘80s. It made a deep impression on me, and I heard there was a school in New York. I asked if I could spend the day and observe. I sat in on classes and thought, I want to do this. I love this place. It fulfilled every expectation that I had.

What was your plan for after the program?

I had no idea, but I took Annemarie’s advice: If you don’t know what to do next, do the next thing that comes up. So, I cooked at a bunch of restaurants in New York. My big goal was to be a healer with food. I started doing personal cheffing and cooking for people who were ill. You have to have a very generous spirit and compassion for people who are not going to stick to the dietary regimen they’ve chosen. I segued from that and started cooking for people who wanted good, home-cooked healthy food. I built a successful business for that. That segued into catering, I did large events, plant-based. I cooked anything, but the main goal was to serve more health-supportive food in a catering setting.

It was around that time that I got a job for a friend of mine at Natural Gourmet — she was a talented whole foods chef and I introduced her to people at the Natural Gourmet, and she turned around and did the same for me. I started teaching knife skills, then she recommended me to teach in the chef’s training program. That started a long love affair. It was a special place, and I had fantasized about working with the teachers who taught me. I indeed fulfilled that fantasy: I wound up working with all of them. Over the years, Natural Gourmet taught me to be a teacher — a good teacher — and I learned a lot. I’m still learning.

I didn’t know I was innately a teacher, though funnily, I come from a line of teachers. My father and mother are very verbal and articulate, and I like communicating with people. I got into teaching and loved it because I like collaborative work, I like the team and sharing ideas and the educational sphere provides all that. 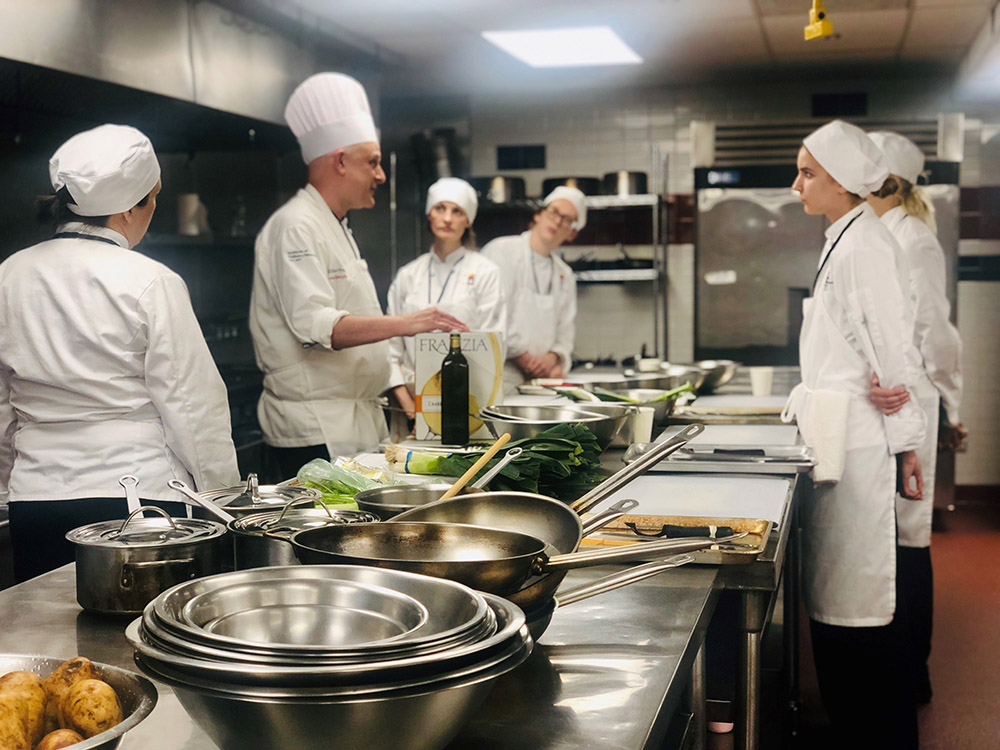 How many people have you taught?

Thousands. I have taught a couple thousand people, many of whom I’m still in touch with.

What is your teaching approach?

Encouraging and open-minded, and dialogue-driven instead of protocol and rule-driven. I’m not the teacher who is the disciplinarian, I’m not a drill sergeant, it’s not boot camp with me. That became my niche over the years, the supportive teacher who lets you try things.

Where has teaching taken you?

At an event at NGI I went up to one of our guests who was eating alone. I was the instructor in charge, so I would make small talk. He told me he wanted to open a restaurant in Sofia, Bulgaria that served this type of food. I was intrigued, I asked what Sofia was like. Sofia was very Mediterranean; Bulgaria sits right above Greece. It’s lovely and historic.

Fast-forward a year, I went to our placement director and said that I was looking to get out of New York and if there’s any international opportunities to let me know. She said she had one thing, and it was from the guy.

I visited for a week because I needed to see it and interact with him. I said I’d audition all week and cook for his friends and see if he liked my style. He offered me a job and paid for my housing. The restaurant was beautiful but outfitted incorrectly. They ordered a commercial kitchen, 10 burners and a convection oven from Italy. Then we got to work and built this nutty restaurant. It was non-smoking, which was unheard of in Bulgaria. It was popular with celebrities, expats and foreigners. Our food was good, and we even won an award from a hip Bulgarian food and wine magazine.

Now you’re back to teaching. How did you transition to ICE?

I was the one who collaborated on adapting the NGI curriculum for ICE's new Natural Gourmet Center. The program had to be reconfigured, some things were expanded as other things were condensed. As we got here it was refined more, but I am teaching the program now and its essence is still there. When I teach it, I feel like it’s true to Annemarie’s original vision. The nice surprise is the students in Los Angeles remind me of the students I had in New York.

How would you describe the Health-Supportive Culinary Arts program?

We start with the fundamentals of technique. Even though it’s a plant-forward program, students need to know how to cut things and grill things, knife skills, basic culinary techniques. Students need to know what good-quality food is, how do we define food that’s health-supportive? How do we choose it?

After that, they need technique classes and, because our food is different, they need exposure in technique to do new things like work with sea vegetables, a wide range of soy foods, even cooking grains and beans. Americans don’t use a lot of grains or beans, so they learn how to do that properly. We teach more health-focused ways to think of baked products and desserts when we teach the pastry arts. We fold into that different theoretical perspectives and models for health-supportive eating, like Ayurveda and macrobiotics. We look at models for detoxification and examine the role of food and immunity. Then we round it all off with a project where students develop a four-course health-supportive menu and serve it. Finally, some health-supportive world cuisine classes: We teach the classics, like Italian, Indian, pan-Asian and Mexican.

What is your goal for students?

I hope they come out with a thorough understanding that the food choices we make really do make a difference in our health. Also, that they come out with an appreciation of how privileged we are as a community to make those choices. A lot of people don’t have the means to make those choices. It’s a privilege to say, I’m going to support eating organic food or pasture-raised animals. All of this costs a lot of money. One of the things ICE students could do is get this lifestyle further into the mainstream, and share it with people who would not otherwise be exposed to it. Everyone deserves to eat in a healthful, nourishing way.

Since your interest began in the ‘80s and you’ve built a career around health-supportive cooking, do you disagree when the concept is considered a trend?

It’s the entire future of food, as resources become more and more scarce. I think we have to look at plant-based diets and how food plays a role in healing. There has to be a more sustainable way to do all of this. I don’t see how this is just a trend. Ultimately, I think it will be a matter of survival.

What role does ICE play in that?

ICE is already playing a role because the school made that choice. Seeing a value in a plant-forward diet and offering the program is playing a role. The school will be putting people out into the restaurant sphere that have these values that will improve restaurant food and the way we think of eating out. I would love to see restaurants not just looked at as entertainment but as healthy places to eat. As you know, veganism doesn’t mean healthier, but our students gain an understanding on what nutritional balance looks like. It’s happening.

Register for our next open house to learn more about Health-Supportive Culinary Arts.